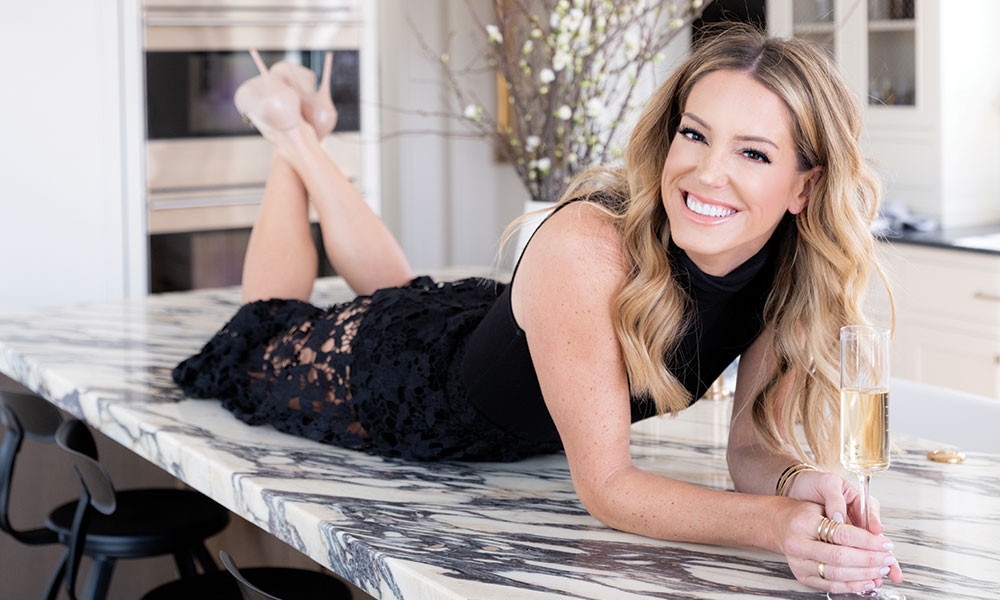 "If you look at our marble, there's etching, there are watermarks," says Andrea Zappone of the countertops everyone told her not to choose for the Saratoga home she and her husband share with three young humans. "I knew it was going to happen, but we went for it. We probably shouldn't have, but I'm still happy about it." (Elizabeth Haynes) 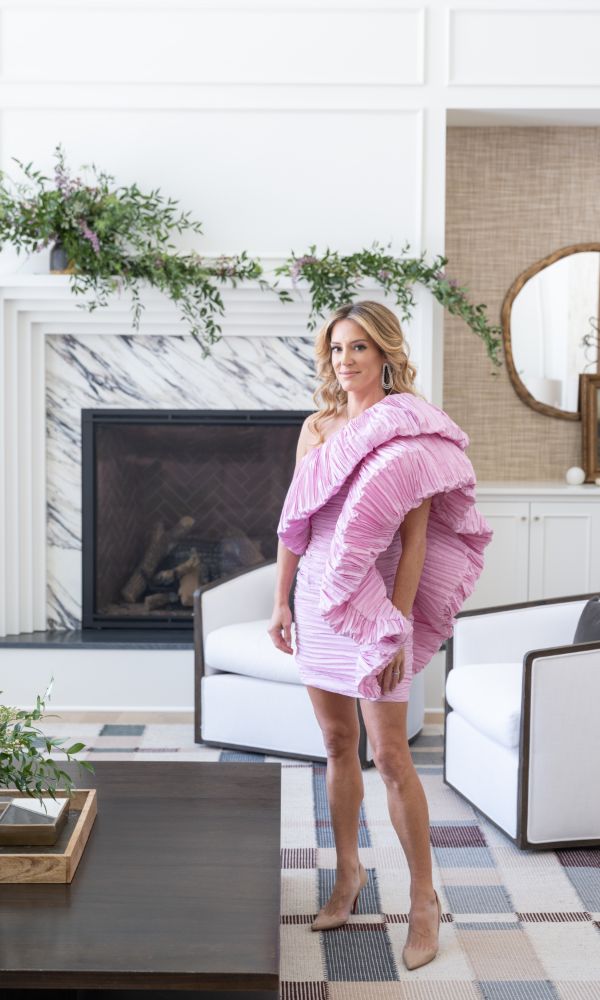 Until recently, there was a white shag carpet in Zappone's living room—a piece that wasn't exactly kid-friendly. (Elizabeth Haynes) 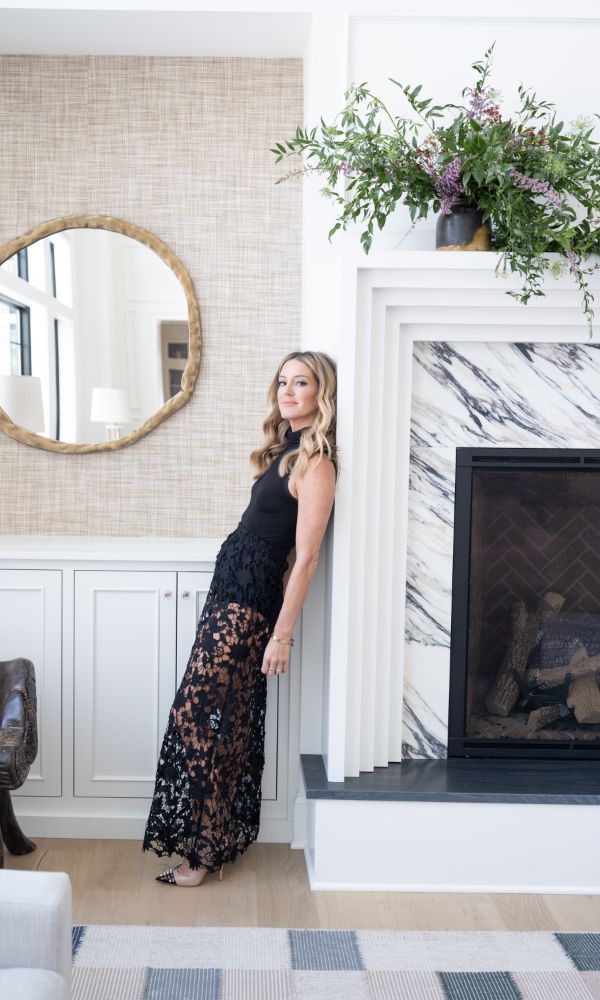 Zappone's living room, seen here decorated with flowers by Goode Farm, features a hidden TV that pops out of the cabinet next to the fireplace. (Elizabeth Haynes) 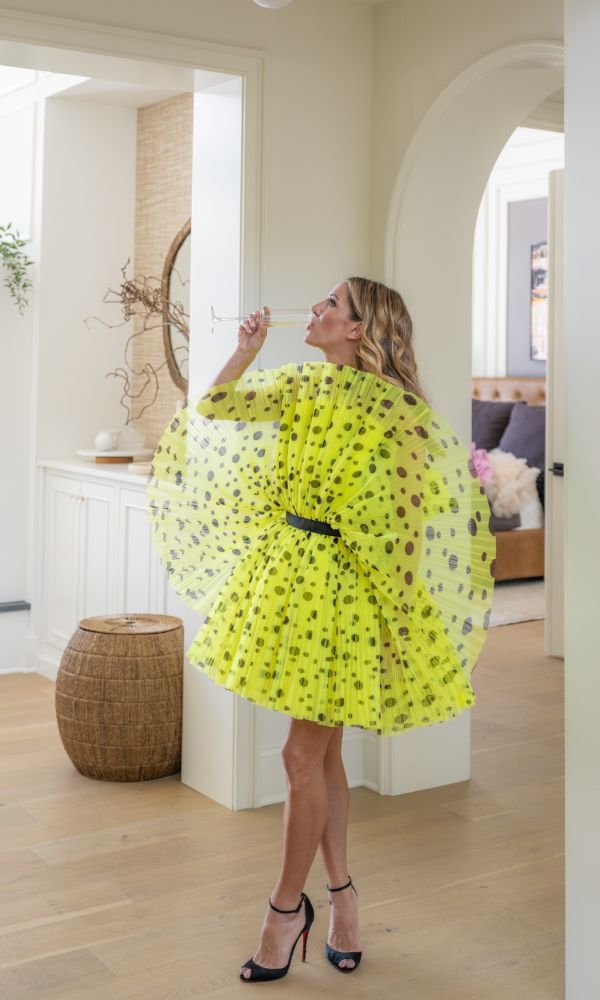 "I have a subscription to every single design magazine that exists," says Zappone, seen here in the hallway of her Saratoga home. "The ones I can't get a subscription to, I go to Barnes & Noble and buy." (Elizabeth Haynes) 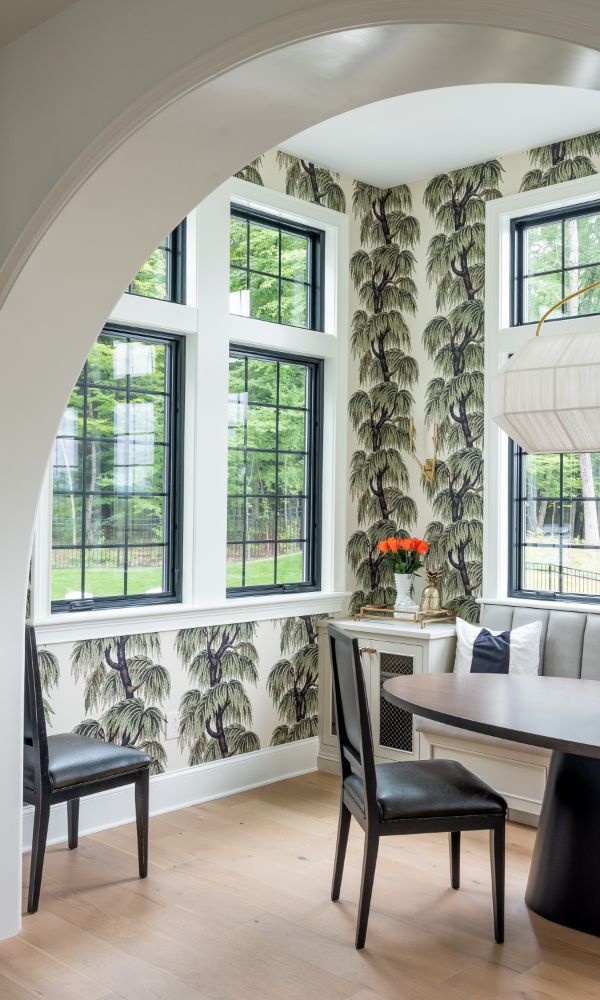 Zappone chose the wallpaper (from UK brand House of Hackney) in her breakfast nook based on a gut feeling and without seeing samples beforehand. On the far wall you can see her vinyl banquette. "It's so cool," she says. "It looks like python. I mean, I can see there's marker on it, but I can just wipe it away." 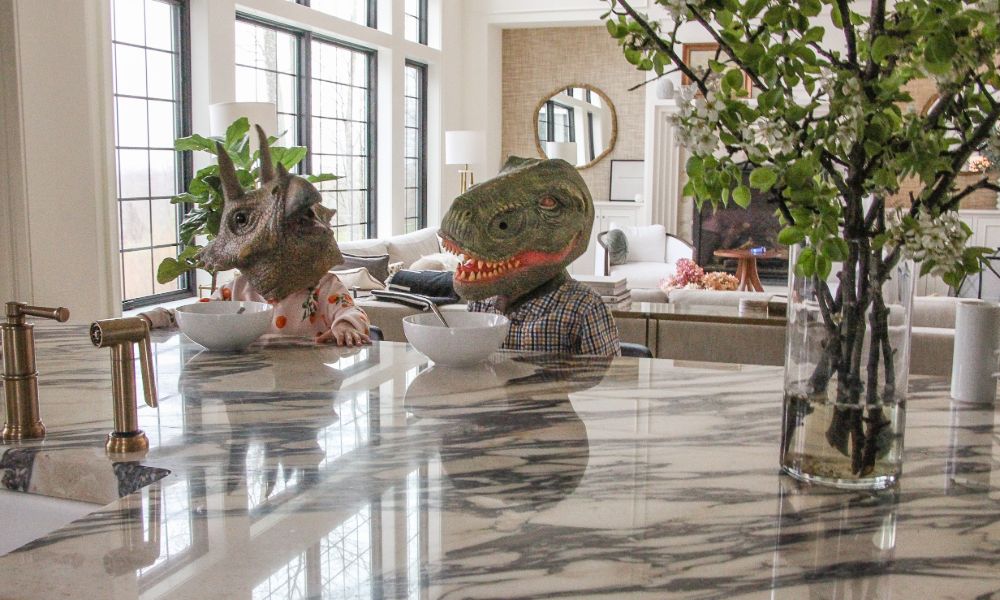 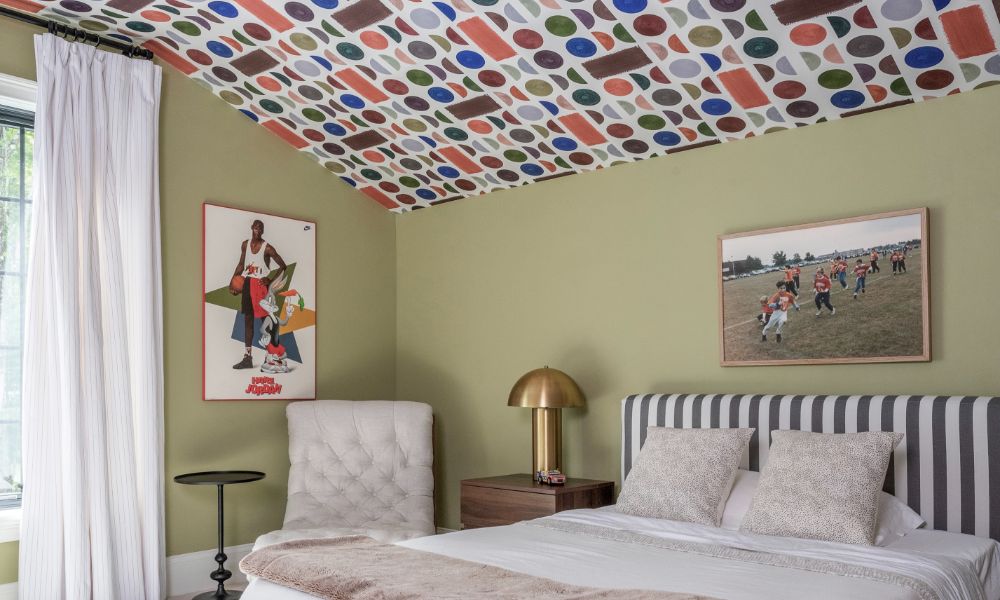 "This room has been widely criticized," Zappone says of her son's bedroom. When she was designing it, she asked him for inspiration and he said, "rainbows." 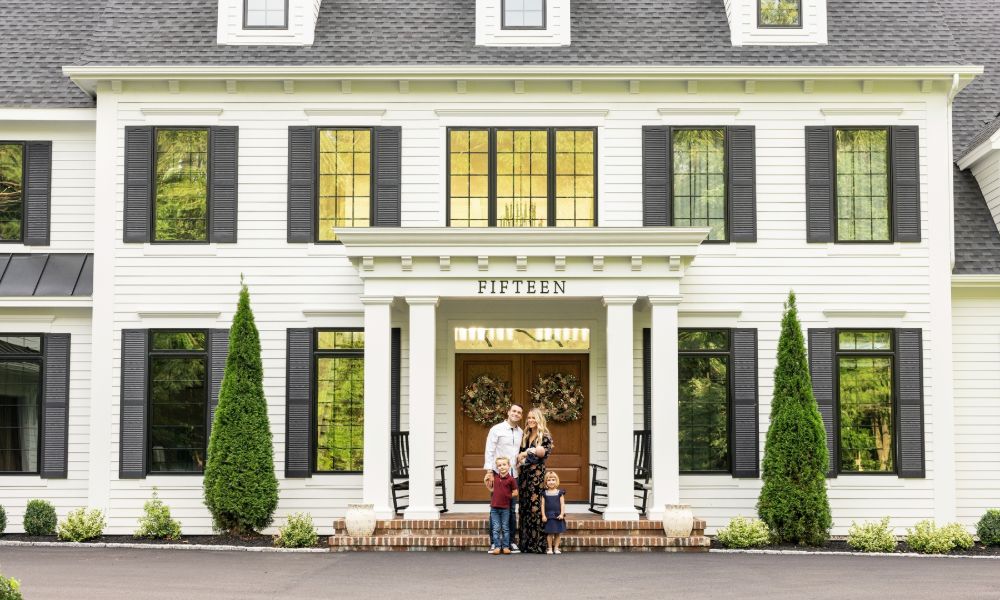 Zappone with her husband, Mike, and three children—James, Rita and Rockwell—outside their white colonial.

“I just want to make sure you are aware that I am not a real interior designer,” was the first thing Andrea Zappone told me when I reached out about featuring her in Saratoga Living’s Design Issue. “I didn’t go to design school, and I am still changing my kid’s diapers during the day.” Diapers or no diapers, upon taking one step into the high-ceilinged foyer of the custom home she designed on the outskirts of Saratoga Springs, I knew one thing to be absolutely true: Andrea Zappone is an interior designer.

What Zappone meant, of course, is that she’s not a trained interior designer, and isn’t currently running a full-time interior design business. Instead, she constantly designs and redesigns rooms in her own gorgeous white colonial, sharing hilariously candid and slightly self-deprecating posts to her Instagram—@andreazappone—along the way. “Sorry my unmanicured bare feet were on the table a couple hours before dinner time,” reads the caption of a photo of her standing on her immaculately manicured dining room table. “Spot the baby grabbing soil out of the fig tree and rubbing it into the white shag carpet,” reads one of her all-white living room. “Behold! I moved the entryway table into the hallway thereby making it a hallway table,” reads another piece of interior design Insta gold. The mother-of-three explains: “When I was in college I always had the purple Nikon camera tied around my wrist, and I would come home and upload 150 photos to Facebook. That’s just always been my personality—to share pictures and be who I am. It hasn’t evolved, it hasn’t changed. I’m still the same crazy person that will upload a million pictures after doing one thing.”

What has evolved, on the other hand, is her design aesthetic. The oldest of three children herself, Zappone’s parents allowed her to design and move into their Utica basement when she was 11. “God bless my parents—they let me do whatever the heck I wanted,” she says of the space. “I decided that I wanted antiques to be my motif, so I had old quilts and vintage mirrors that I found at garage sales. Instead of hanging pictures of my friends, I asked my dad if he could find old portraits of my great-great-grandparents and distant relatives. And I actually had framed pictures of all these dead people. I can’t even describe it—my bedroom was absolutely insane.” But while the thought of her childhood room may make her cringe today, she fondly remembers closing her door, putting on a CD and designing a space that was all her own—something that, in adulthood, she’s been able to do on a much grander scale.

Since marrying her husband, Mike, Zappone has renovated or completely designed from scratch four homes—two in Queensbury, one in Wilton (for which she won the Best Interior Design award in the 2015 Saratoga Showcase of Homes) and the one in which the family currently lives (it has been featured on housebeautiful.com and in House & Home magazine). “When we built a house in Wilton, I didn’t know how to design a home for a family,” she says. “But I learned a lot, because we had our first two kids there. I really built this house”—the Saratoga one, which was built by Belmonte Builders in 2019—“with an understanding that this banquette is going to get trashed. So we put vinyl on it.” In fact, even beyond the breakfast nook banquette, the entire house is fairly kid-proof, as Zappone utilized performance fabrics wherever possible. She also has a room upstairs that I wasn’t allowed to go in, on account of it not looking like it belonged in a magazine. “An important thing when you’re designing a house with young kids is you have to have a room that you literally just don’t care about,” she says. “I’m not putting time or money into it—that’s where they eat pizza.”

Another reason Zappone doesn’t want to touch that second-floor space is that as her kids get older (and therefore may be allowed to eat pizza in rooms she does care about), she wants to transform it into a home office to launch—yes—an interior design business. Currently she works with a few clients, selectively choosing small design projects she’s excited about, but has a big project starting in March that she’s thinking may kickstart a career. (“This is like my coming out!” she says of this very story, not to get too meta.) When she starts to second-guess her untrained design aesthetic, she turns to Instagram, where other self-taught designers are reshaping the world of interior design. “It makes me feel good about launching a business and not being ashamed of the fact that there’s stuff I don’t know,” she says of seeing such Instagram accounts. “But some people appreciate that I don’t follow many rules. I’m a little bit reckless and just go off the cuff.” So while everyone and their mother would consider Zappone an interior designer now, maybe someday soon, she will too.