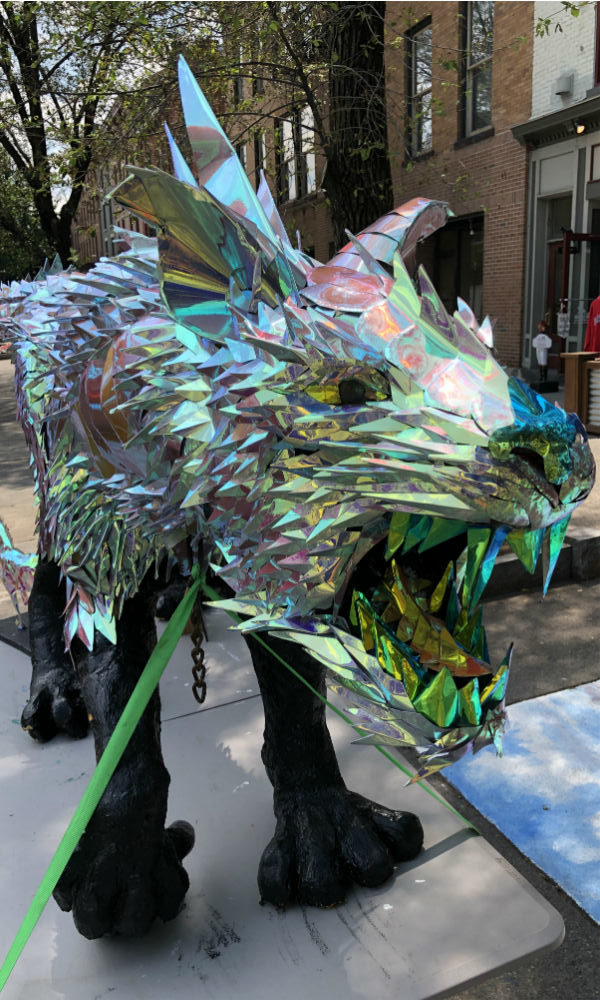 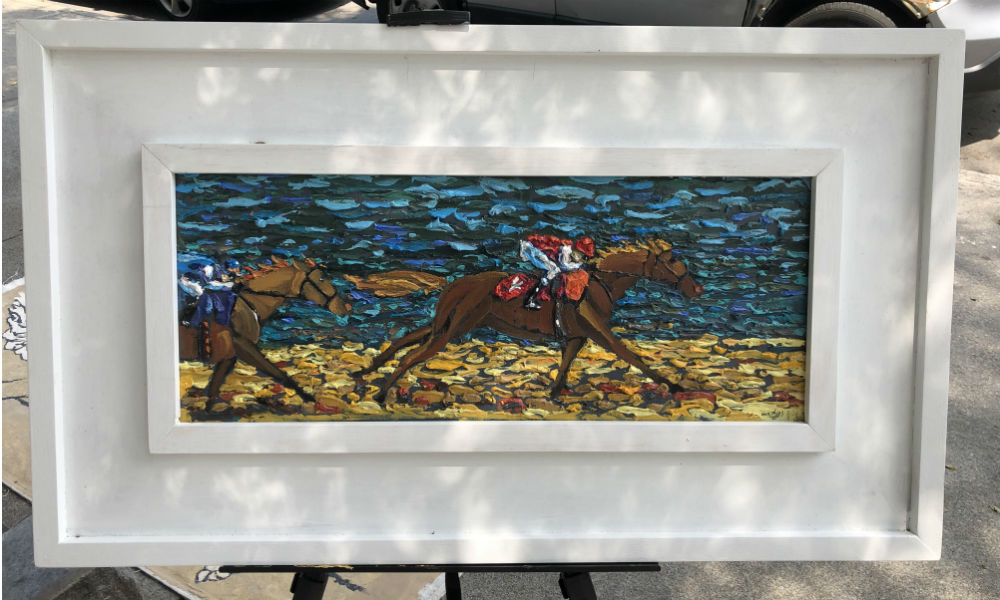 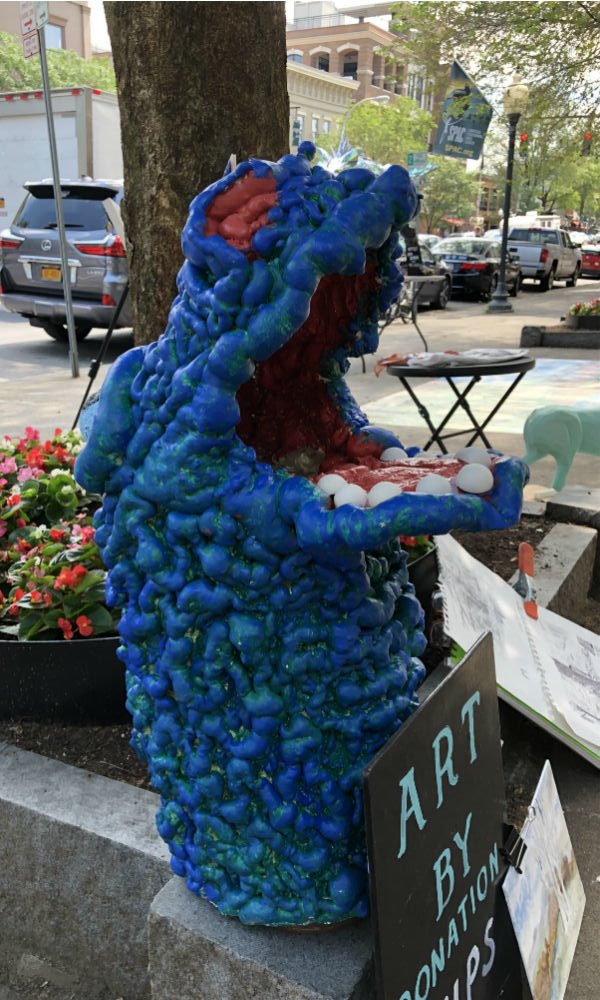 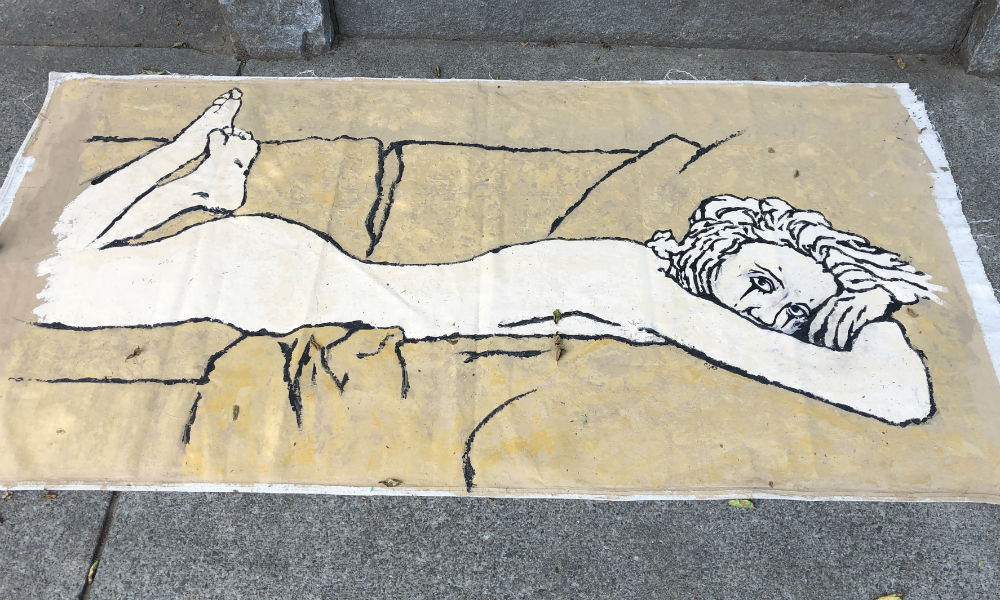 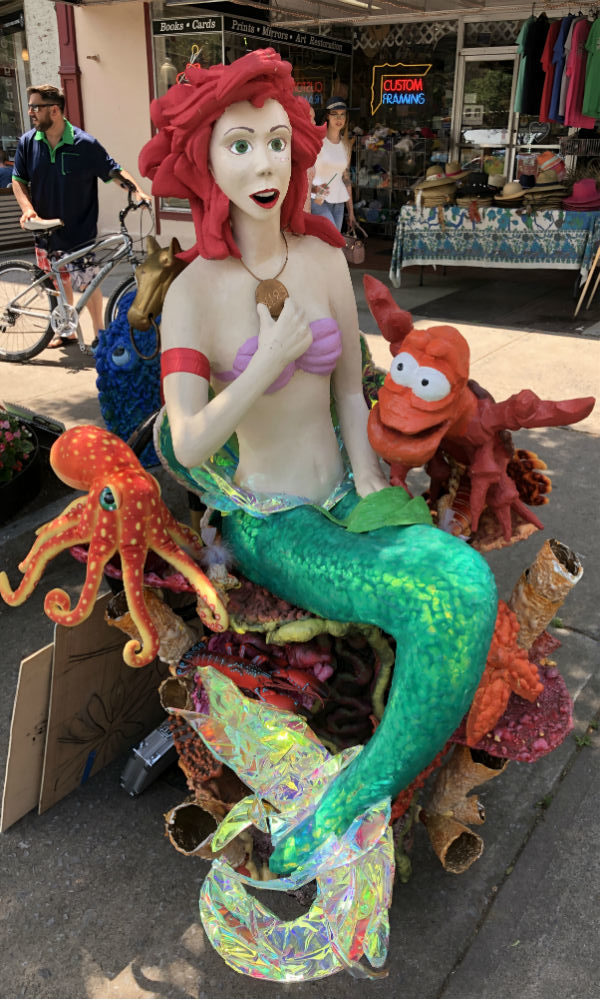 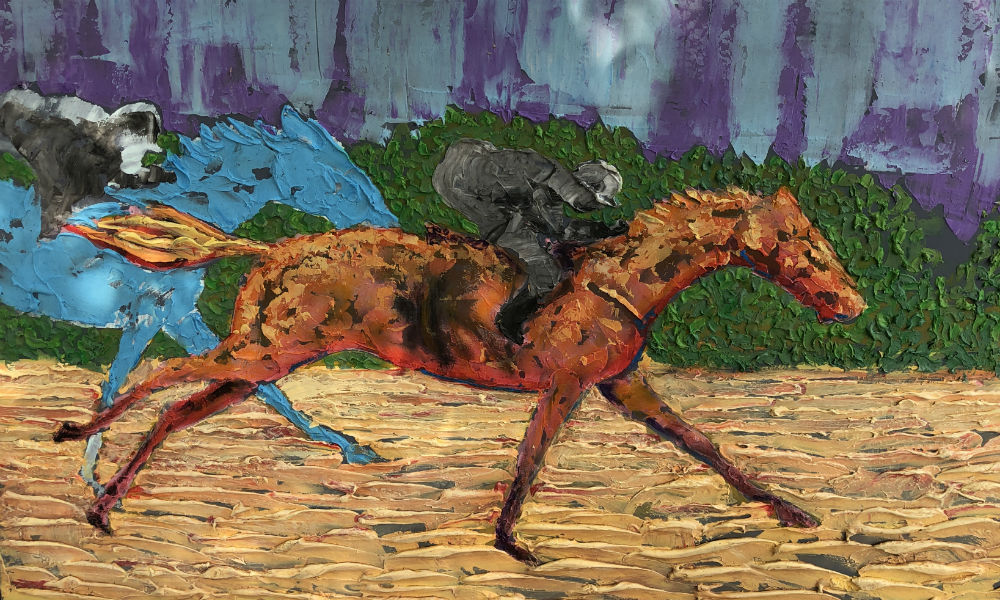 While artist Erik Johnsen might be best known locally for his sculptures, he also produces paintings, such as this one. (David Feld)

Another one of artist Erik Johnsen's pieces of horse art. (David Feld)

I have an affinity for shiny objects, and I recently stumbled on a sizable one while walking down Broadway in Saratoga Springs. It wasn’t some polished penny or piece of glass glinting on the side of the road, though. This one had a group of people around it, gawking, so of course, I had to join them and see what was up. It turned out to be a giant, metal sculpture that resembled a cat outside of art supply store Soave Faire, with a plaque at its paws revealing that it was the work of an artist named Erik Johnsen. I had to figure out who this mysterious man—and sculpture!—was.

I tracked down Johnsen, and it turns out that the metal-plated, attention-getting sculpture is entitled Galaxy Cat. Johnsen, who describes himself as more of a mad scientist than an artist, moved to Argyle, NY, in 2001, and has since established himself as an installation artist, displaying his pieces in and interacting with people on the streets of Saratoga. Another one of Johnsen’s eye-catching sculptures? The Little Mermaid, which was on display at the Charles R. Wood Theater in Glens Falls this past April, as part of the artist’s Blind Art Tour, one that he curated with the visually impaired in mind. (The exhibit was partly inspired by a blind cousin, as well as a minor stroke the artist had that rendered him temporarily blind.) For The Little Mermaid, Johnsen was very exacting in his craft, going out of his way to match the exact dimensions of main character Ariel from the same-named Disney classic (she’s 5-foot-7-inches tall and weighs 90 pounds, if you were wondering). He was clued in by former Disney animator Philo Barnhart, who helped create Ariel for the 1989 animated movie. The sculpture, which is composed of “a dozen different textures,” including foam, caulk, plastic film and silicone, was designed to be touched and interacted with. Even non-impaired exhibit-goers were given special glasses that obscured their vision in order to interact with the art the way a visually impaired person might.

The two ingredients to Johnsen’s “recipe for success” are goal-setting and abstaining from television, which he says fuel his desire and drive for constant innovation and art-making. And his side gig has been lucrative; he’s been gradually transitioning from his commercial contracting day job to full-time sculpting. Johnsen’s latest creation, Lucifer, a winged horse sculpture, recently debuted outside Soave Fair on Broadway, and it’s currently for sale for $5000. If you’re in Downtown Saratoga this weekend and a shiny object catches your eye, be sure to stop by Johnsen’s sidewalk display. He’ll even let you touch, or as was the case with me and Galaxy Cat, pet his sculptures.

Looking to add a shiny, bizarro sculpture to your front yard or living room? You can contact Johnsen directly at (518) 955-5523, [email protected] or via Facebook.

David Feld is an editorial assistant at saratoga living.

How To Make Charitable Giving Part Of Your Financial Plan (Advertisement)