If you’re like saratoga living, you grew up on (and sorely miss) meteorologist Jason Gough’s weather forecasts. (To jog your memory, Gough, who spent 18 years on the air, was the meteorologist on NewsChannel 13 for 13 years.) As it happens, Gough is still offering up daily weather forecasts—but from his website, jasonsweather.com. We’re proud to announce that saratogaliving.com will be partnering with Jason on a number of weather-related stories, including his spot-on forecasts.

Good morning! Yes, you can say we crushed records this weekend, not only by volume, but by margin. Yesterday became the warmest January 11th on record (since 1874), but that’s only part of the whole story.

Here are all the numbers from Albany:

As of today (January 12), well, we’ve already broken the record of 63° set 2 years ago. But, that’ll be the only one to fall today, as temperatures will start to come back to reality as we get into this afternoon.

It’s important to note that not everyone is basking in the early fall-like temperatures. Some cold air has bled down into the upper Hudson Valley, where it’s in the mid 30s from Schuylerville and Glens Falls to Whitehall. To put that into perspective, here are three separate area temperatures: Schuylerville (35) to Ballston Spa (42) to Schaghticoke (61). These 3 stations are 14-15 miles apart from each other! That’s amazing.

Rain and showers will continue this morning, with freezing rain and sleet well to our north and a line of heavy rain with a bunch of gusty winds to our south. Everything will continue to push to the east and northeast this morning, including the passage of a cold front. As that front moves through, it’ll sweep the rain out with a gusty northwest wind; some gusts will exceed 50mph. The wind will also usher colder air in through the afternoon with temperatures falling into the 40s and 30s before dinner.

Today’s Forecast: Expect a high today of 64, but by noontime, that’ll be down to 56 and by 5pm, 40. Skies will be clearing out through the evening as the wind continues; it’ll ease up overnight with lows overnight falling into the teens and 20s. Tomorrow will be much cooler, but still above average for this time of year with highs in the low 30s to 40° under a mix of sun and clouds.

A version of this story originally appeared on jasonsweather.com. 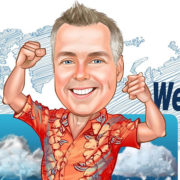