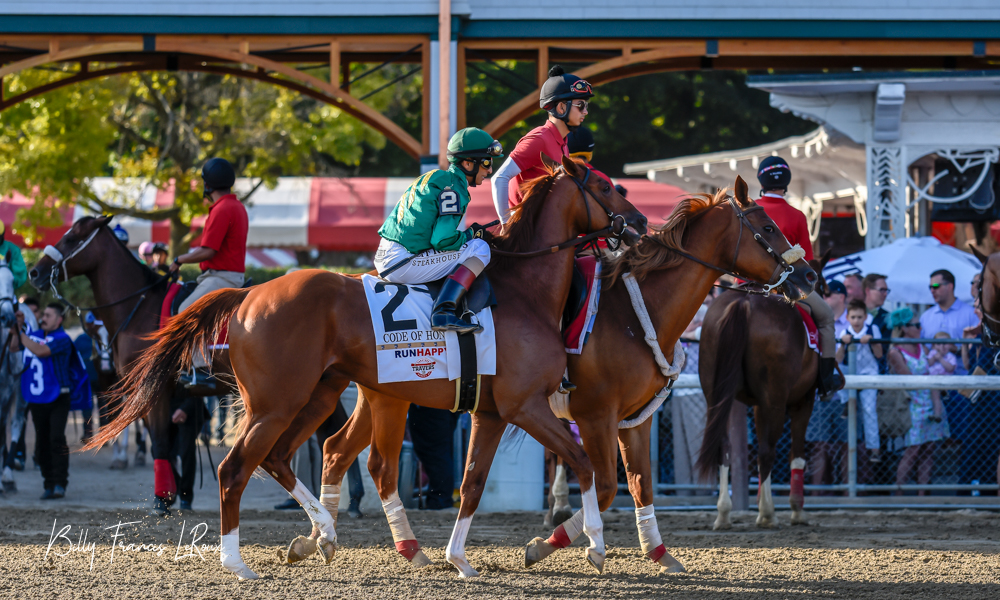 Code Of Honor walks onto the track for the Post Parade. (Billy Francis LeRoux) 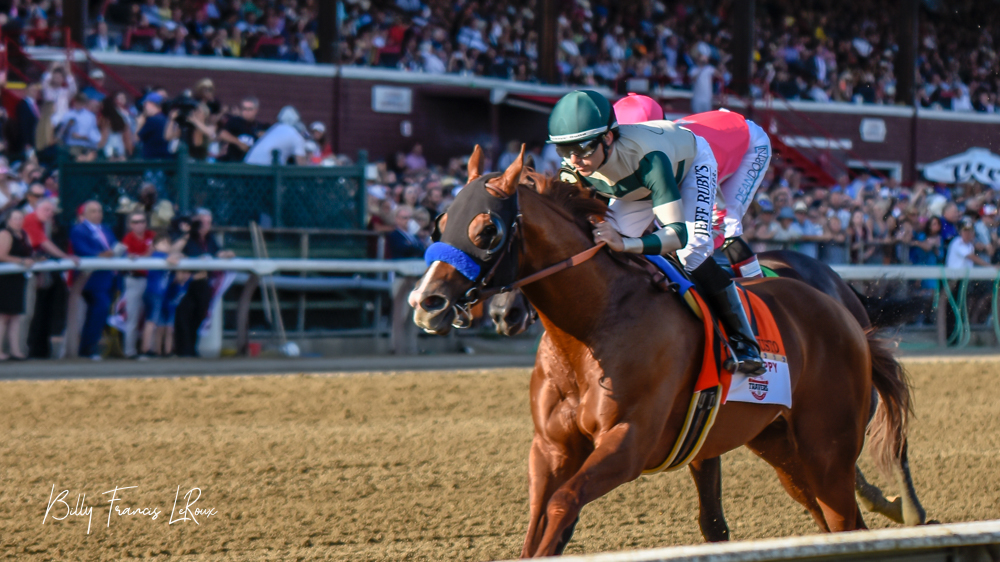 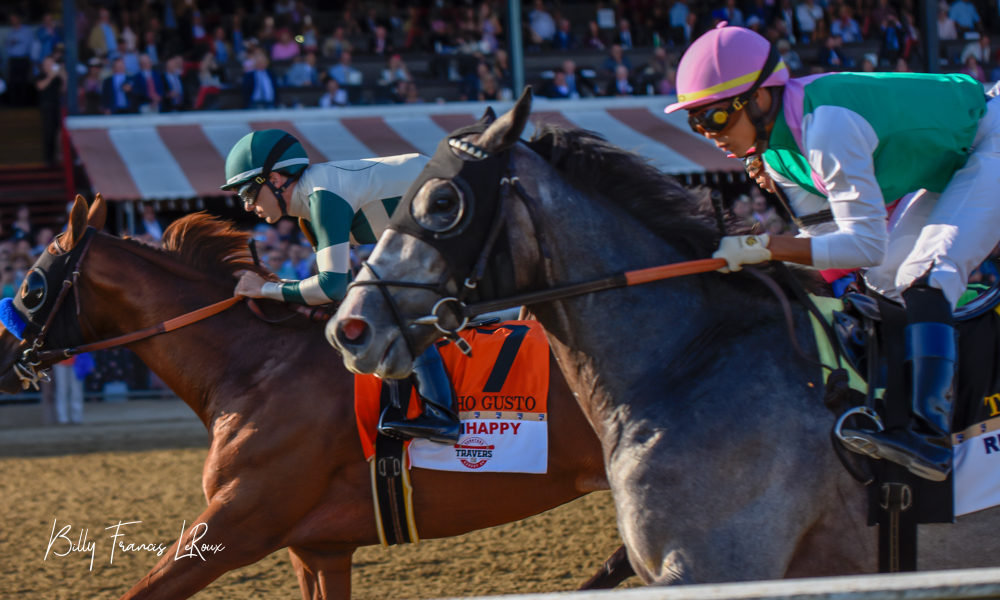 On the inside, Tacitus keeps close to pace-setter Mucho Gusto. (Billy Francis LeRoux) 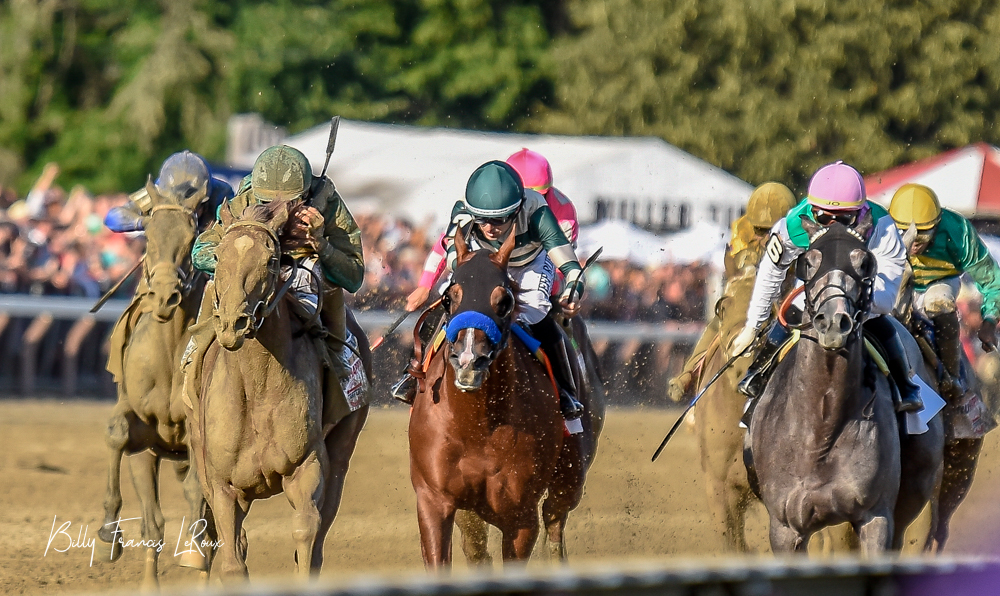 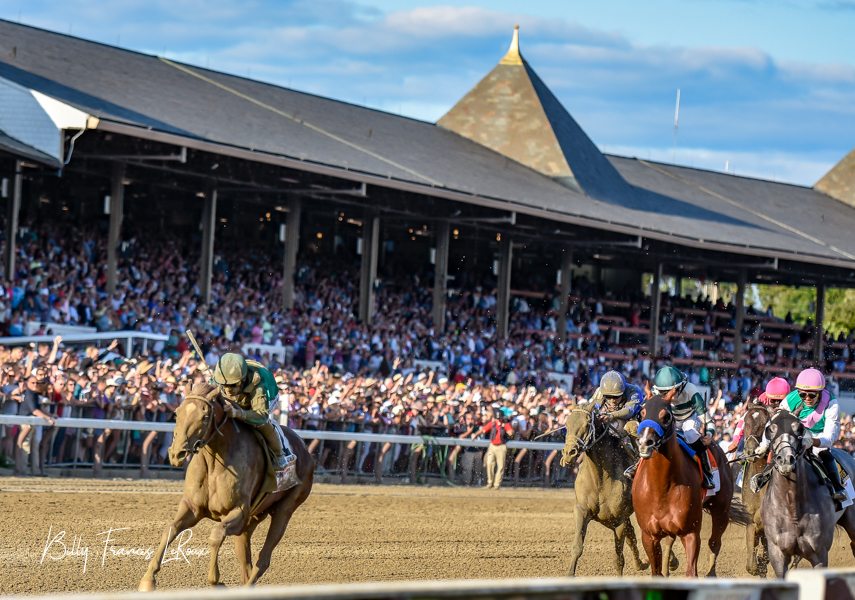 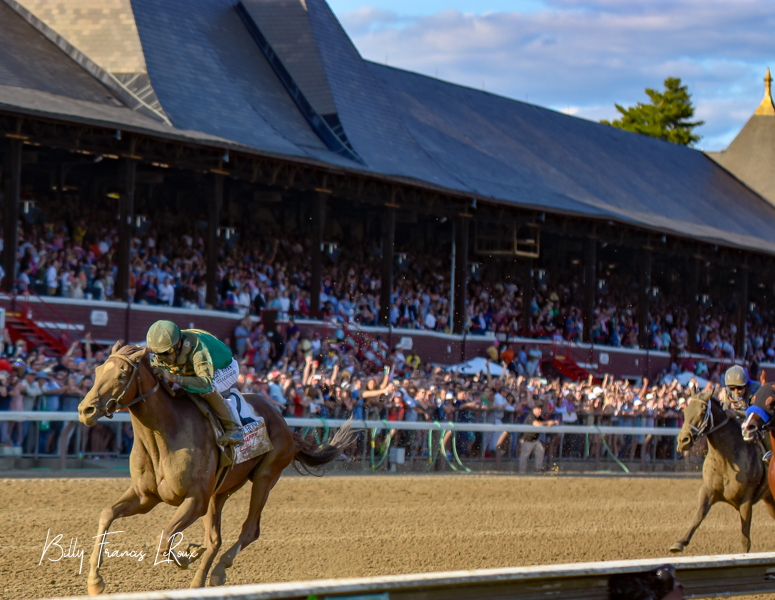 Code of Honor coasts to win by three lengths in the Travers Stakes. (Billy Francis LeRoux) 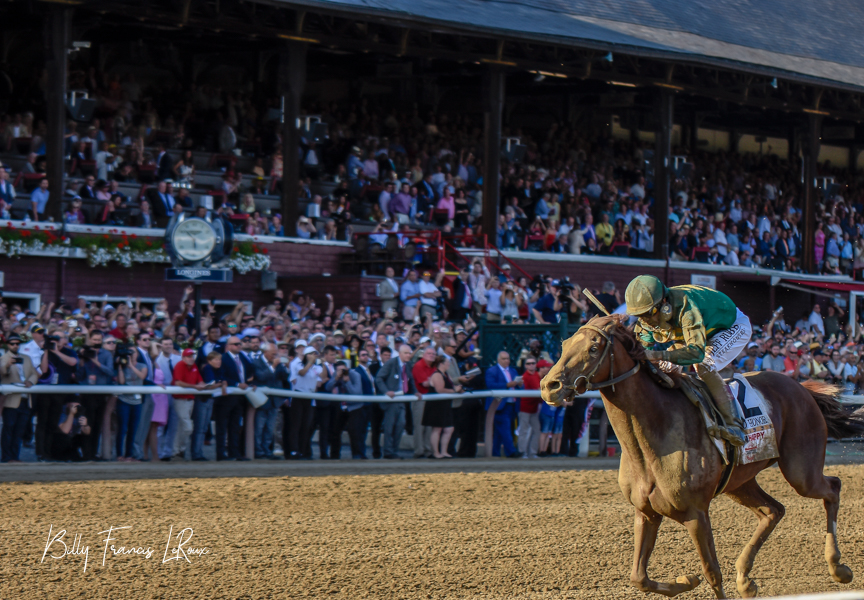 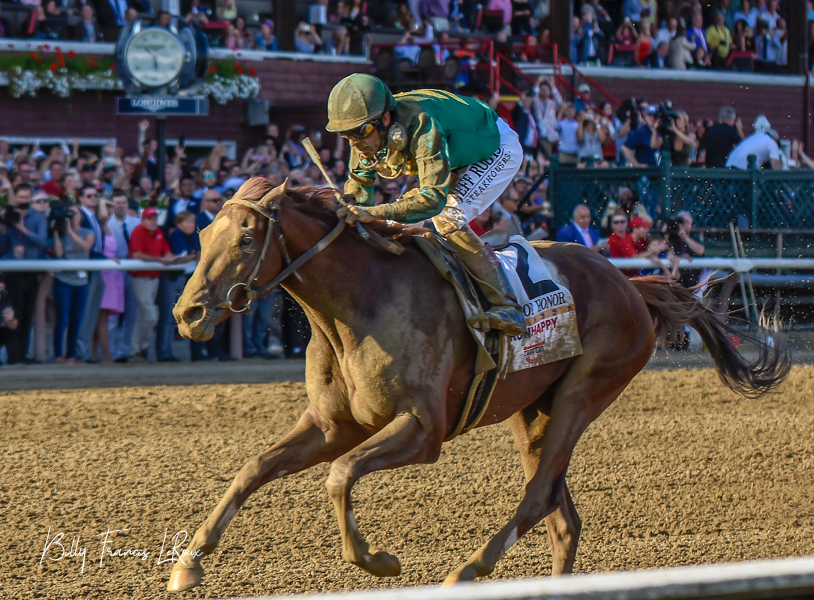 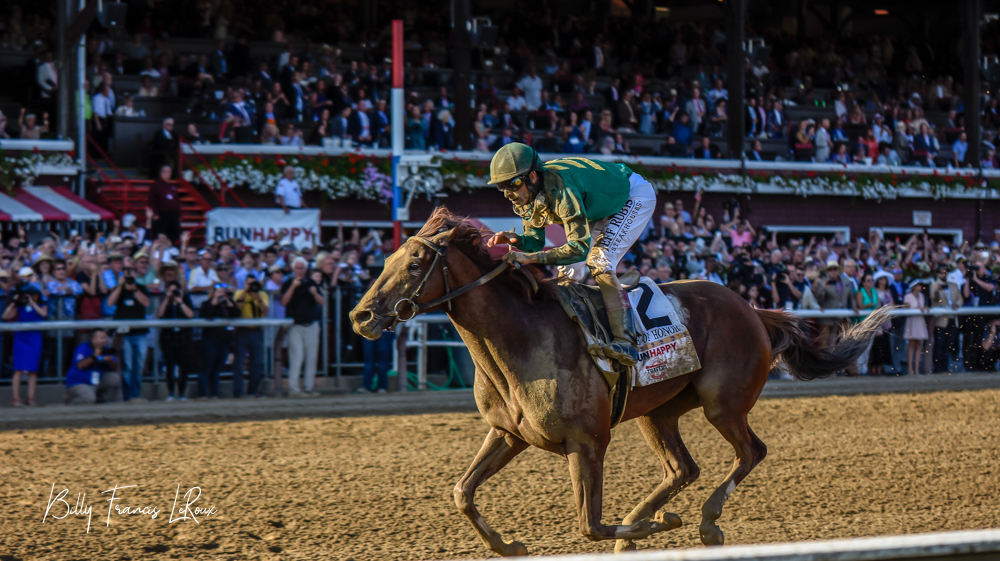 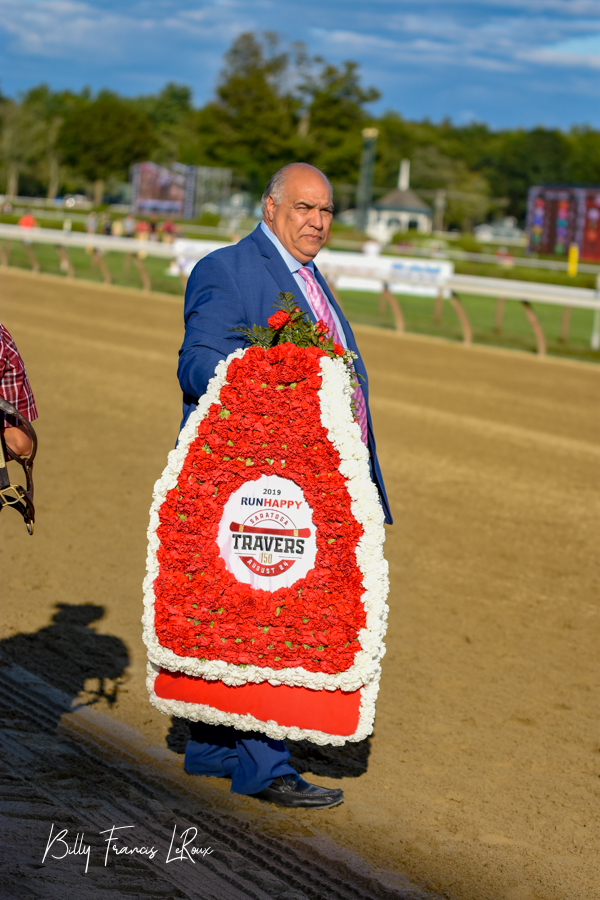 Code of Honor trainer Shug McGaughey with the flower blanket ready to drape over his Travers-winning horse. (Billy Francis LeRoux) 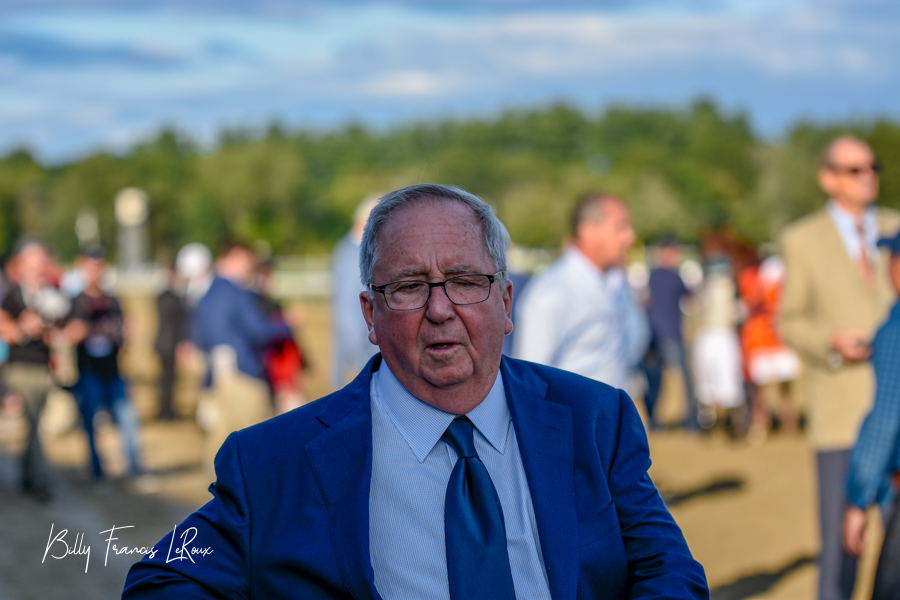 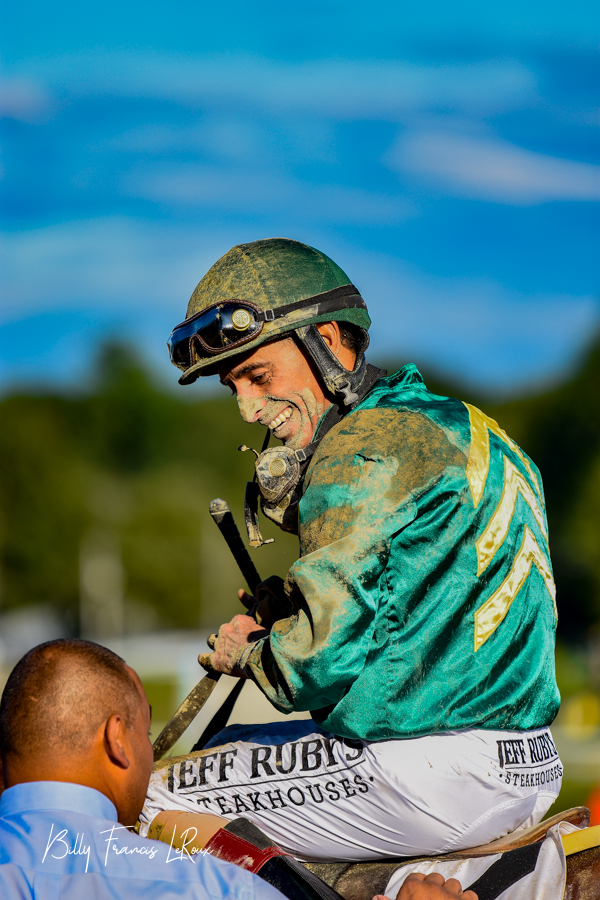 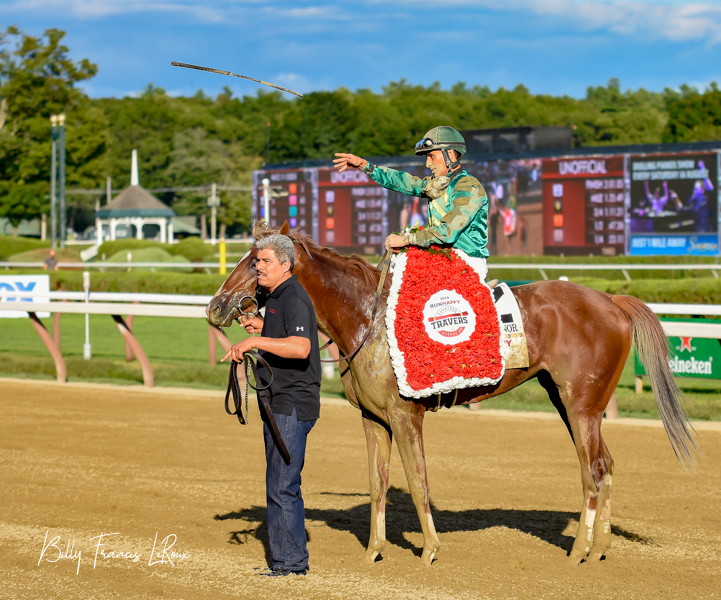 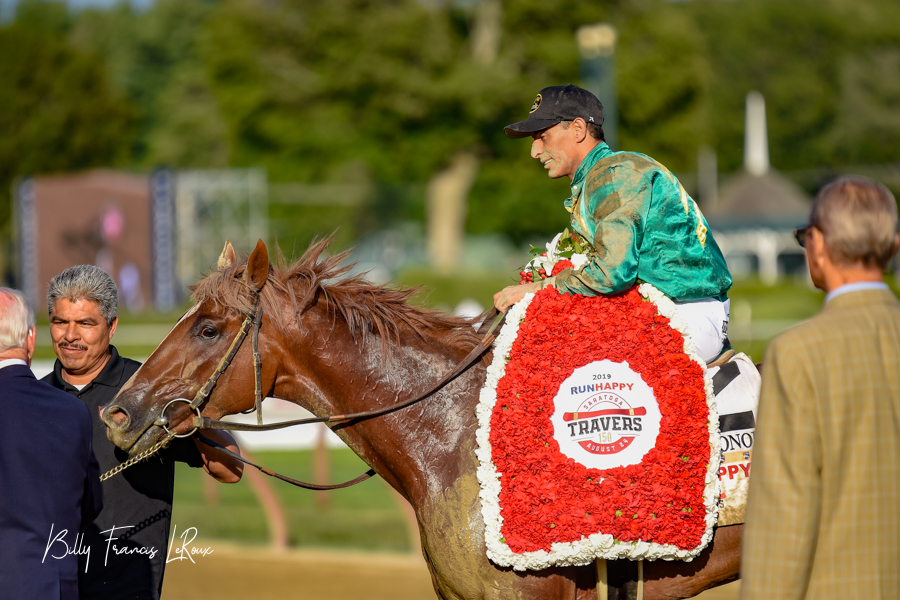 Code Of Honor with Jockey John Velazquez aboard Code of Honor in the Winner's Circle. (Billy Francis LeRoux) 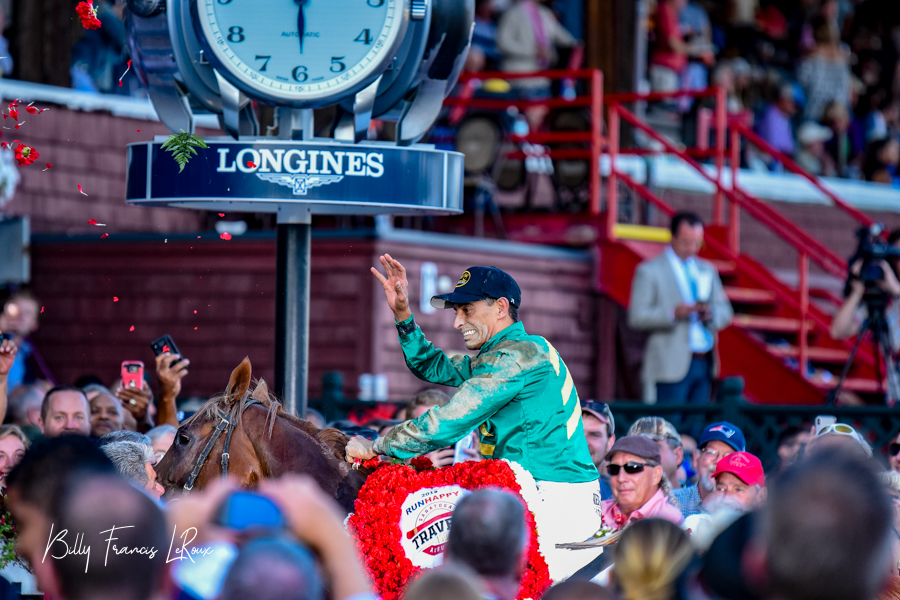 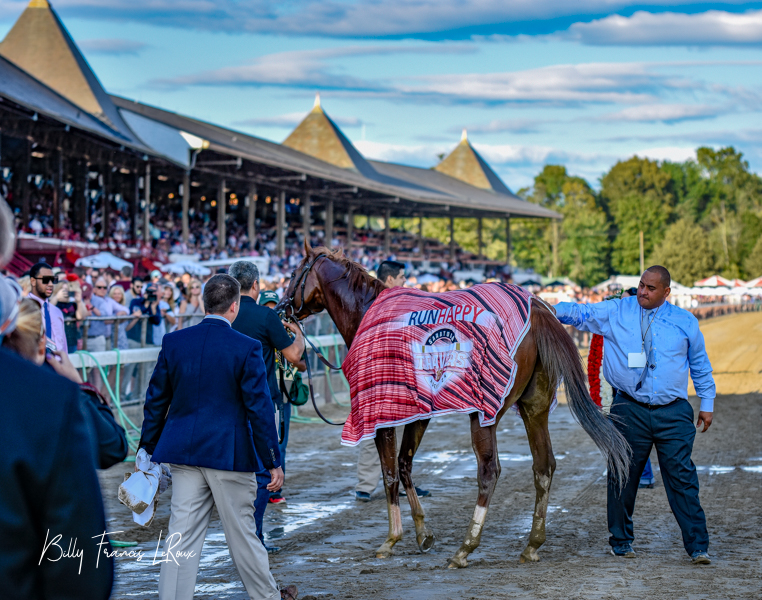 Code of Honor heads back to the barn wearing the flower blanket draped over the Travers winner. (Billy Francis LeRoux)

SARATOGA SPRINGS, N.Y. – After Code of Honor didn’t win the Kentucky Derby, trainer Shug McGaughey knew immediately he wasn’t going to run the colt in the remainder of the Triple Crown series.

There is no bigger race for 3-year-olds in the summer than the Travers. On Saturday, McGaughey found himself in the winner’s circle for the fourth time in the marquee race of the Saratoga meet as Code of Honor powered down the center of Saratoga’s main track and ran by Tacitus and Mucho Gusto inside the sixteenth pole to win the Grade 1, $1.25 million Runhappy Travers by three lengths before a crowd of 48,213 at the Spa.

Tacitus, second in the Belmont Stakes and Jim Dandy, finished second again – though this time without excuse – a half-length in front of Mucho Gusto.

Endorsed rallied from last to be fourth and was followed, in order, by Owendale, Highest Honors, Tax, Chess Chief, Laughing Fox, Scars Are Cool, Looking At Bikinis, and Everfast.

By winning the Travers for the fourth time, McGaughey equaled Elliott Burch for second-most wins in this race, one behind Winbert F. “Bert” Mulholland, who won five Travers between 1939 and 1963.

McGaughey won his first Travers in 1989 with Easy Goer, won it again in 1990 with Rhythm and, most recently, in 1998 with Coronado’s Quest.

The win was the first in the Travers for owner William S. Farish, 80, who suffered excruciating defeats in this race in 2007 with Grasshopper and 2008 with Mambo In Seattle.

“This was just too good,” said Farish, who owns and bred the son of Noble Mission. “We knew we had a really good horse.”

McGaughey knew that Code of Honor would benefit from time to grow up. So after the Kentucky Derby, in which he finished third but was elevated to second following the disqualification of Maximum Security, McGaughey pointed Code of Honor to the Dwyer, which he won on July 6 by 3 1/4 lengths.

Since it was only three weeks to the Jim Dandy on July 27, McGaughey opted to skip that race and just train Code of Honor up to the Travers. Code of Honor turned in a series of workouts over the Oklahoma training track that had McGaughey excited about the Travers.

“He got up here and started doing as good as a horse could do,” McGaughey said. “I thought his Dwyer was really good from where I had him and I thought that sort of kicked this into gear.”

McGaughey also believed Velazquez had figured out how Code of Honor needed to be ridden – lay back and make one run.

In the Travers, Code of Honor was ninth early as Tacitus, with blinkers on for the first time, showed speed and went to the front under Jose Ortiz through an opening quarter in 23.11 seconds. Mucho Gusto, trainer Bob Baffert’s entry, was up on the pace under Joe Talamo and took over the lead down the backside, running a half-mile in 47.26 seconds and six furlongs in 1:11.21 with Tacitus pressing from the inside, a head back.

Velazquez launched his bid around the turn. Unimpeded, he came eight wide into the lane. While Mucho Gusto and Tacitus were still knocking heads – they even bumped in deep stretch – Code of Honor soared past that pair inside the sixteenth pole and drew off for the convincing score.

“My horse has no speed, I just to have to bide my time and give him the chance he needed and then come running down the lane,” said Velazquez, who won his second Travers but his third graded stakes on Saturday’s card. “That’s the style of my horse. He’s a lot better, he’s grown up, he’s paying more attention for the things he needs to do and he’s shown that the last couple of races.”

Said McGaughey: “I thought we would get a little bit of pace and I think Johnny got to where he knows him pretty good, too. He rode him that way today. At the three-eighths pole I thought he wasn’t going to kick, but then he kicked.”

That Tacitus was part of the early pace was somewhat surprising, though with the blinkers on for the first time he broke sharp – unlike the Jim Dandy where he stumbled – and Ortiz was content to lay close.​

“I was traveling so comfortable I thought I had a huge shot all the way,” Ortiz said. “The other horse came and run us down, he ran a hell of a race.”

It was the second Grade 1 race in which a horse trained by Bill Mott finished second. Elate got beat a nose by Midnight Bisou in the Personal Ensign.

“The horses ran good, when the day is over I don’t think we have any excuses,” Mott said.

David Grening covers the New York Racing Association circuit of Aqueduct, Belmont, and Saratoga plus such national events as the Triple Crown and Breeders' Cup. He is a contributing author to "Champions" and joined Daily Racing Form in 1998.