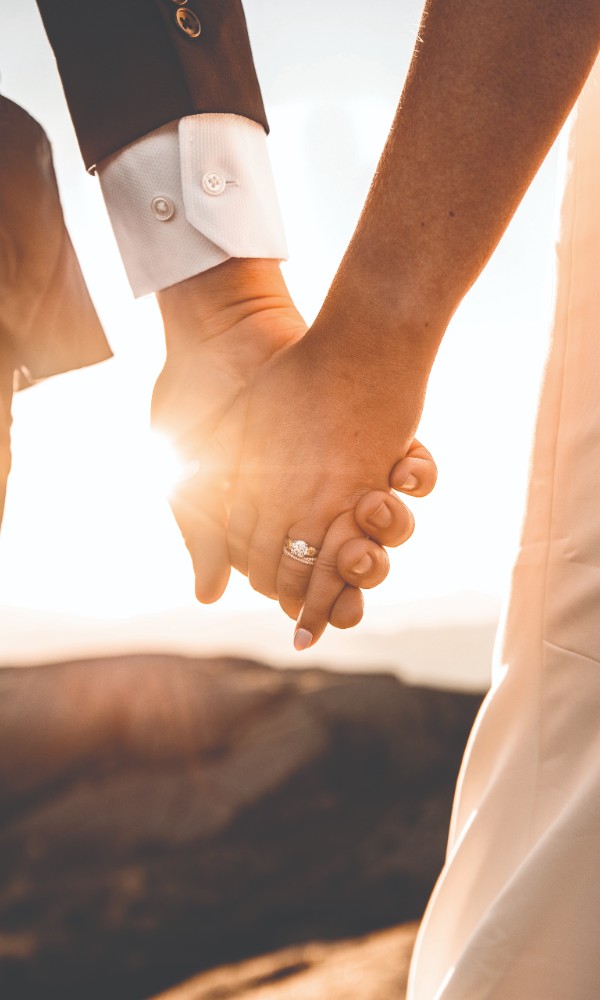 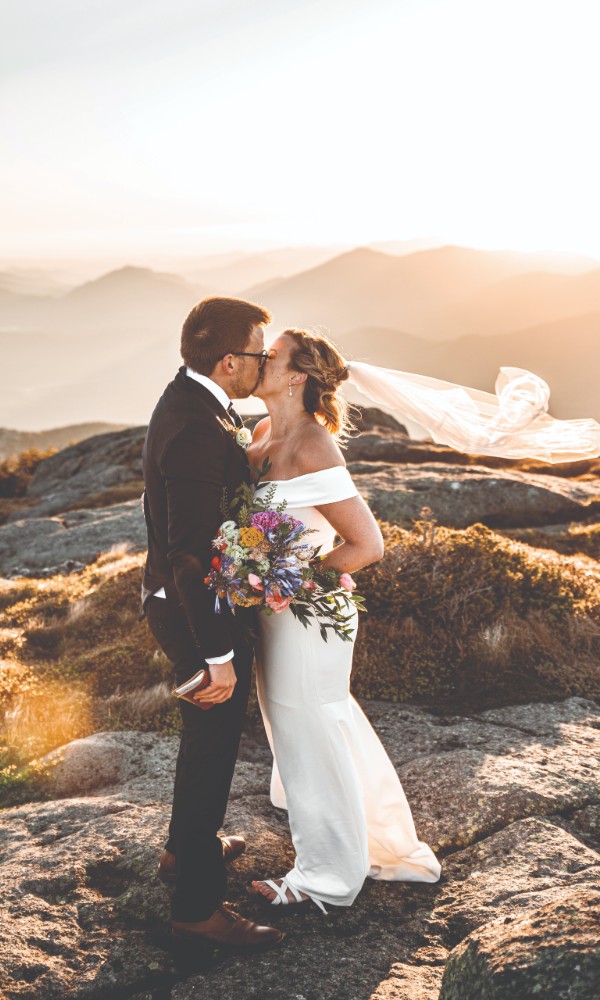 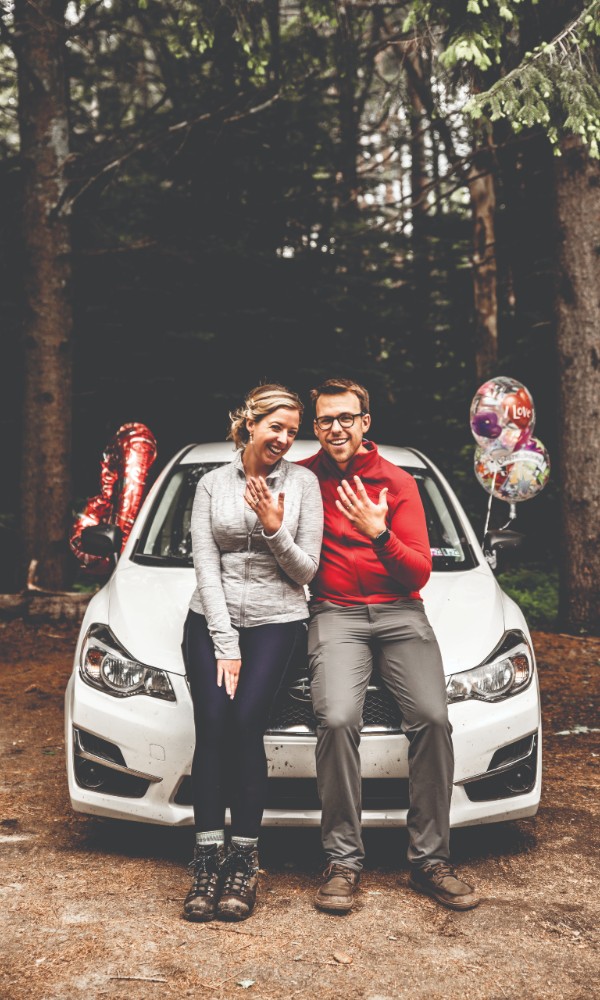 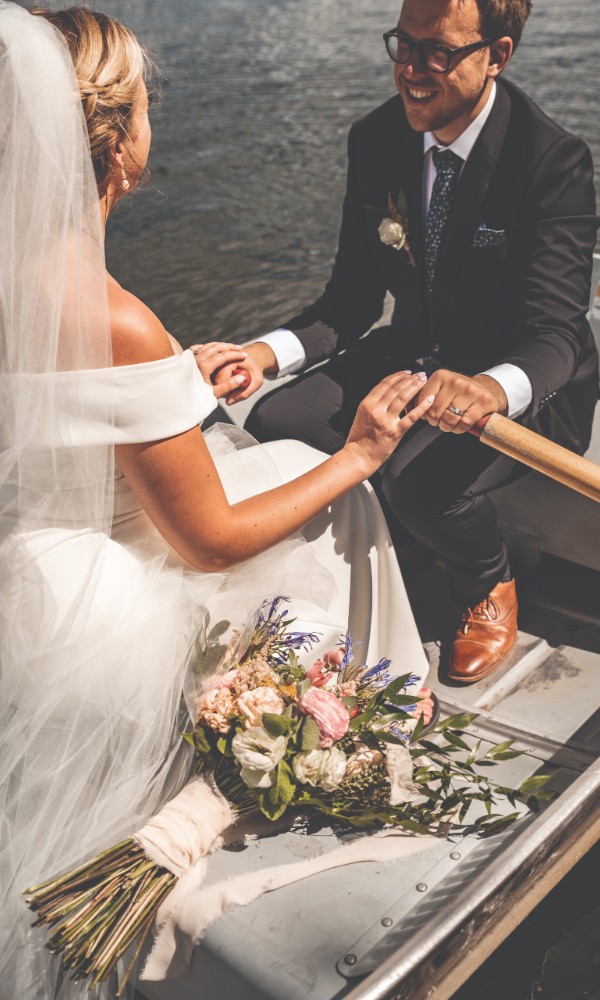 When the pandemic hit last March, many couples opted to postpone their nuptials until it passed. But not these wedding warriors. They made the magic happen, COVID be damned. The result? Three intimate Adirondack ceremonies that prove that love needs no audience.

Most brides don’t have to worry too much about transporting their wedding dress to their wedding venue—wherever they’re going, their garment bag can come, too. Clifton Park native MaryJane Anderson was not one of those brides.

Like many brides-to-be, Anderson had a big, formal wedding planned for 2020 but was forced to push it back because of COVID. She and her now-husband, Sam Dienel, officially changed their Gideon Putnam wedding from May 30 to October 2 of last year, but even before the original date arrived, they were making alternate plans. “As events began to unfold in the spring, Sam and I looked at each other and said, ‘You know, the one thing that feels safe and predictable and trustworthy this year in the midst of all this chaos is the partnership we have with each other and the love that we share,’” Anderson says. “One day I turned to him and said, ‘I never in a million years would have considered this, but let’s make it official now.’”

So the couple began planning an elopement. Anderson had been following Schroon Lake–based husband-and-wife photography team The Pinckards, who specialize in adventurous elopements” on Instagram, and reached out to them. While most of the elopements The Pinckards photograph (and officiate—Dan, the husband, is an ordained minister) take place on fairly short hikes in the Adirondacks, Anderson immediately started thinking bigger. “Sam and I were daydreaming together and I was like, “Oh, it’d be so cool to hike one of the High Peaks,’” she says. “I said that one of my favorite mountains that I’ve hiked many times is Algonquin, which is the second-highest peak in the High Peaks range. And Sam’s eyes lit up.” Then, as if a 10-mile round trip hike to the second-highest point in New York State wasn’t enough, the outdoorsy couple decided to do it at sunrise.

After pushing the date back one day due to rain, Anderson and Dienel met Dan and Laura Pinckard at the Algonquin Peak trailhead at 1:15am on Friday, June 12. Dienel’s suit
and Anderson’s dress were carefully rolled—not folded—in their packs, and the bridal bouquet was poking out of Dienel’s pack. “I had my hair done the night before, and
just put the headlamp on over top of that,” Anderson says. “And then we set forth.” They giddily scrambled up the mountain, kicking it into high gear when they saw the sun coming up as they approached the summit, and changed out of their hiking clothes on the top of the mountain. “We exchanged vows, which was truly out of this world, as the sun rose,” Anderson says. “It was also comical because it was, like, 30 degrees with the windchill and so imperfectly perfect—very 2020 to be in that environment.”

When they got back to the trailhead, it was only 10:30am, and they still had the rest of the day to celebrate. They took a rowboat out on Lake Placid, had a second, mini ceremony where they reread their vows in front of their immediate families and feasted on Korean barbecue at an Airbnb. “It was ridiculous and funny—a party of nine people eating takeout in this totally unexpected environment,” Anderson says. “Nothing was at all how we had envisioned it, but it was so fun and so perfect to be reminded that, at the end of the day, it’s all about partnership and family and finding support for one another.”