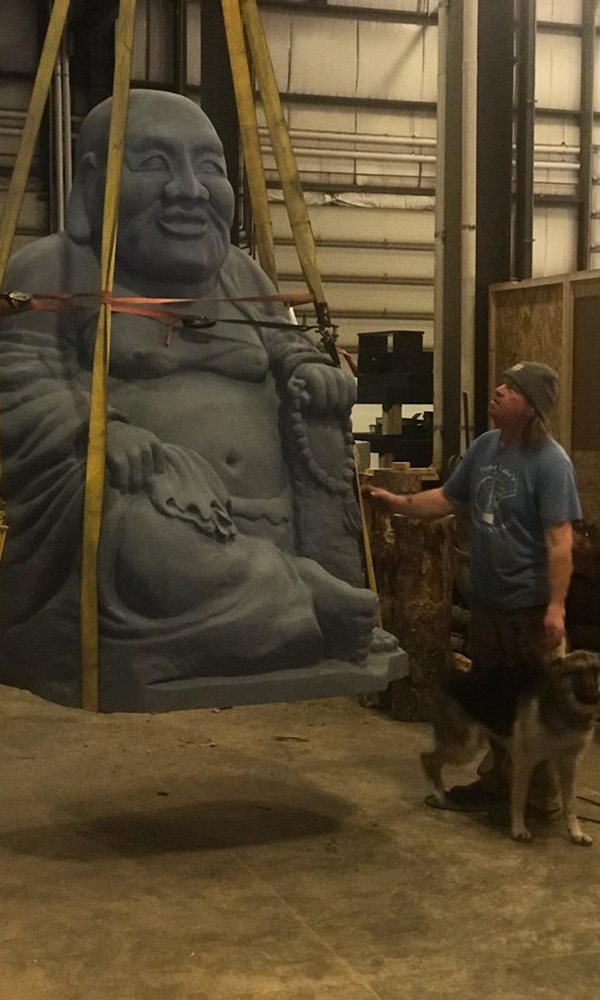 Artist Scott Hook with the buddha sculpture he created for Kevin Bright and his wife, Claudia Wilsey Bright. (Scott Hook) 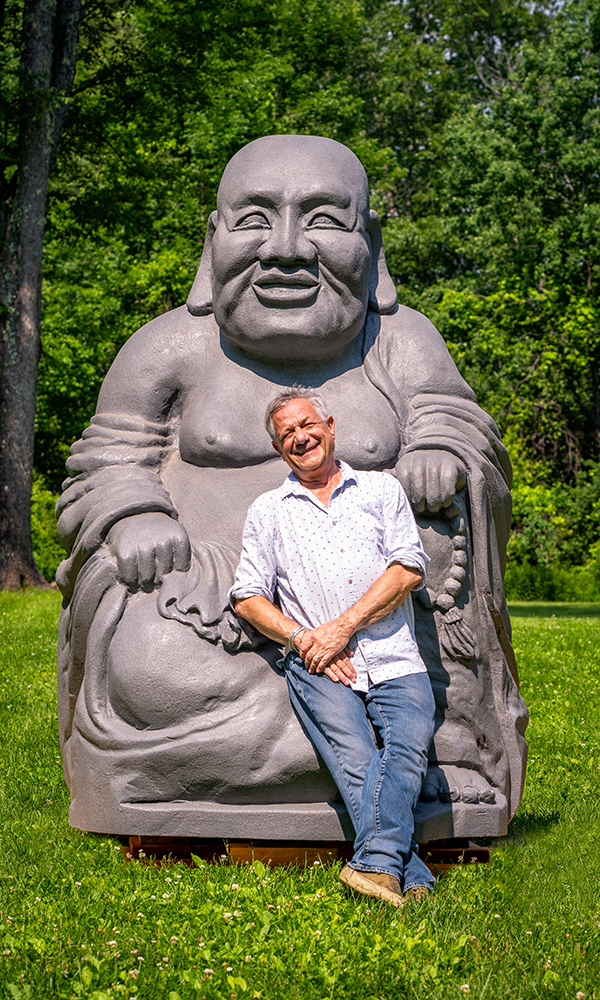 Kevin Bright, posing with the huge buddha sculpture he had artist Scott Hook create for him and his wife. (Francesco D'Amico) 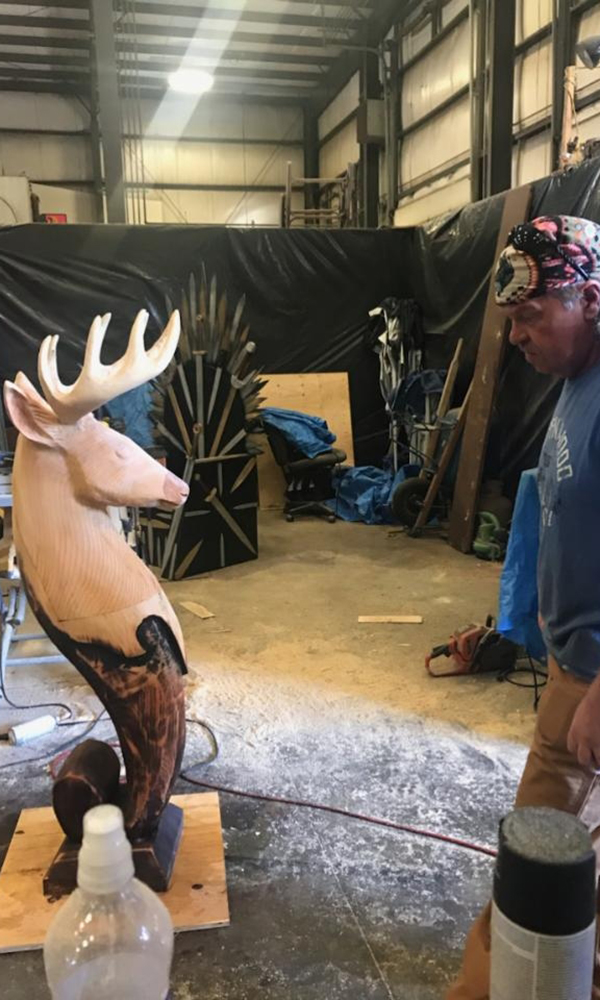 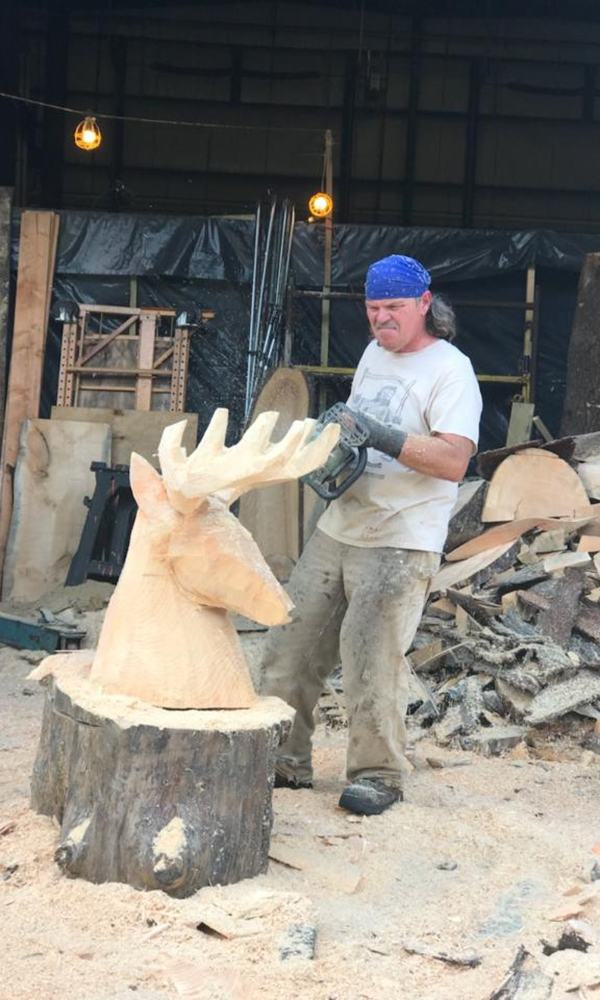 Scott Hook sculpting a deer's head out of a piece of wood. 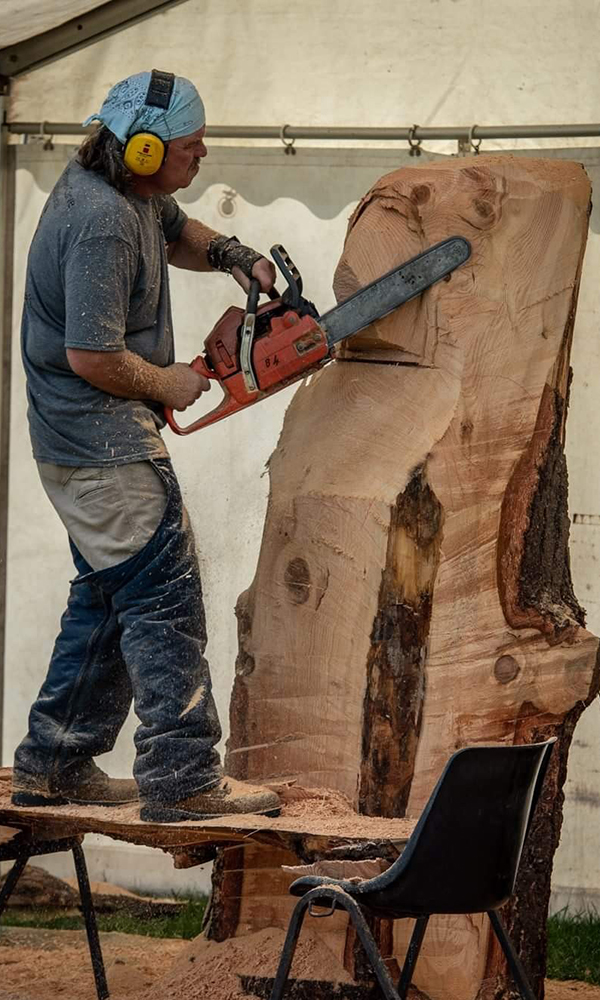 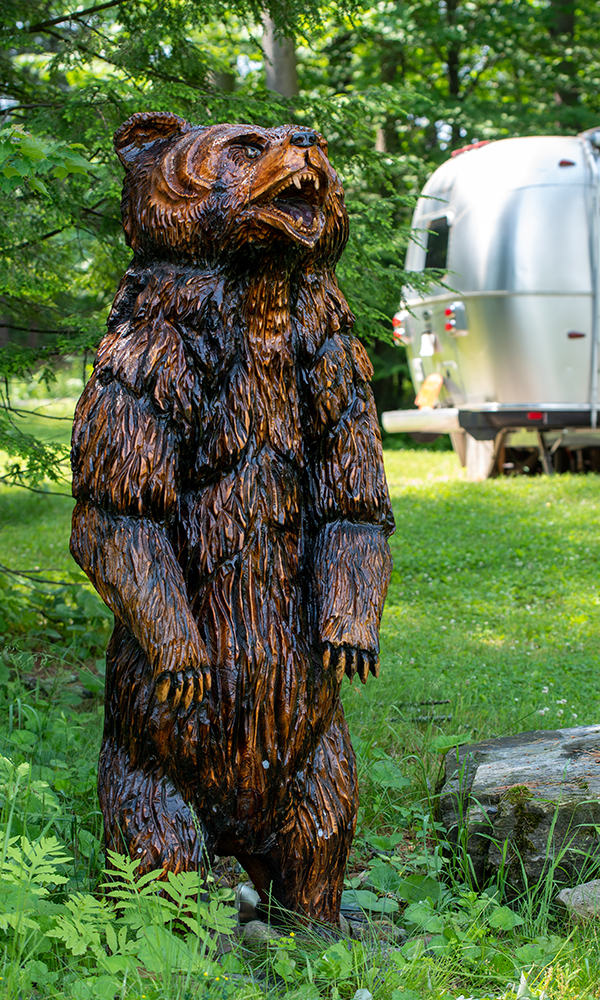 A formidable wooden bear, which stands along a path by a pond on Kevin Bright's property, was created by artist Scott Hook. (Francesco D'Amico) 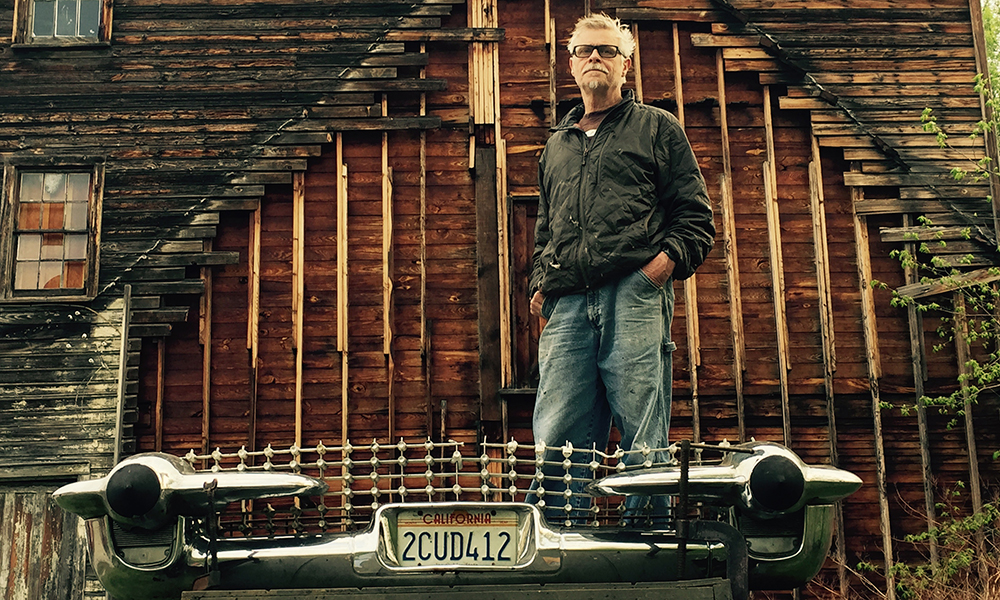 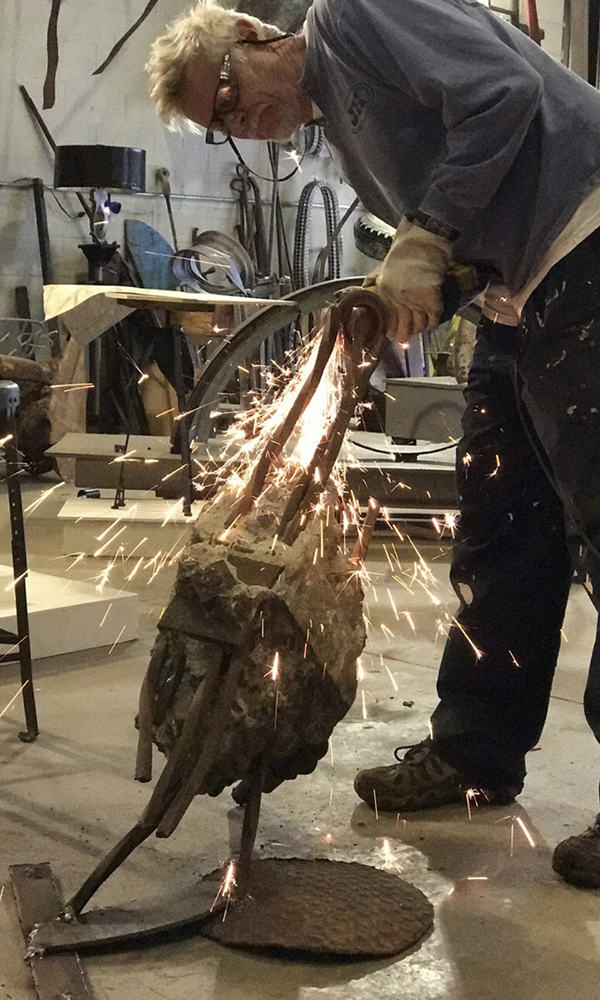 Artist Barney Bellinger hard at work on one of his sculptures. 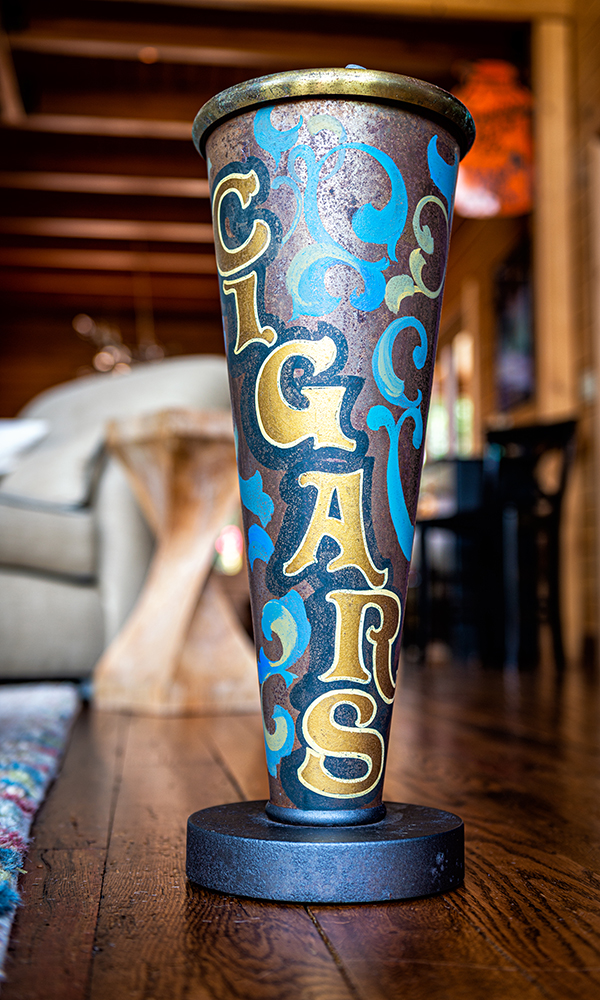 Artist Barney Bellinger is a master at creating whimsical pieces out of pieces that others just throw away. (Francesco D'Amico) 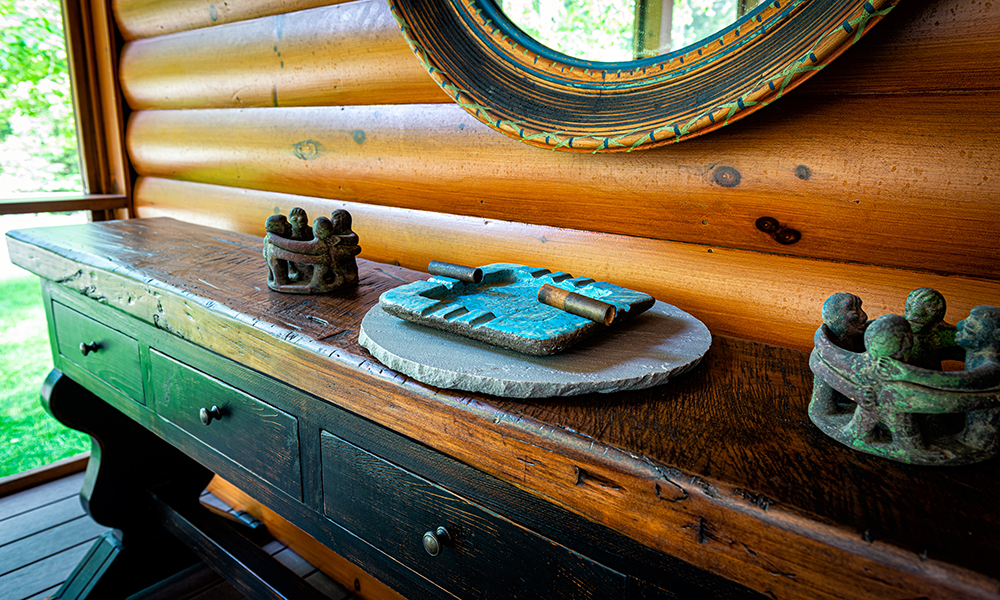 A '50 era Cuban ashtray, which artist Barney Bellinger added shotgun shells to (as cigars) that has a place of honor in Kevin Bright's screened-in porch area. Bellinger gave the piece to Bright. (Francesco D'Amico) 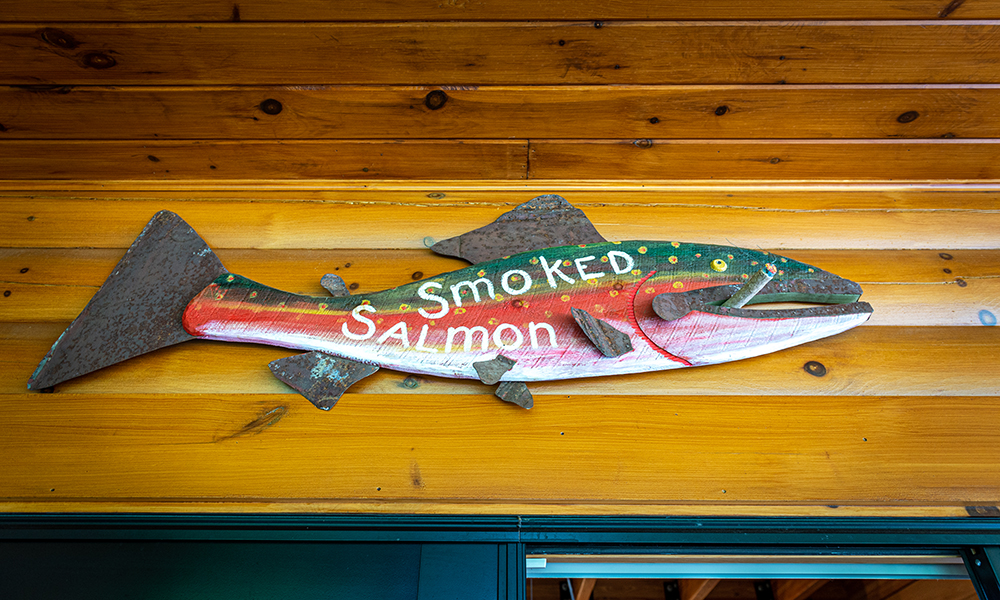 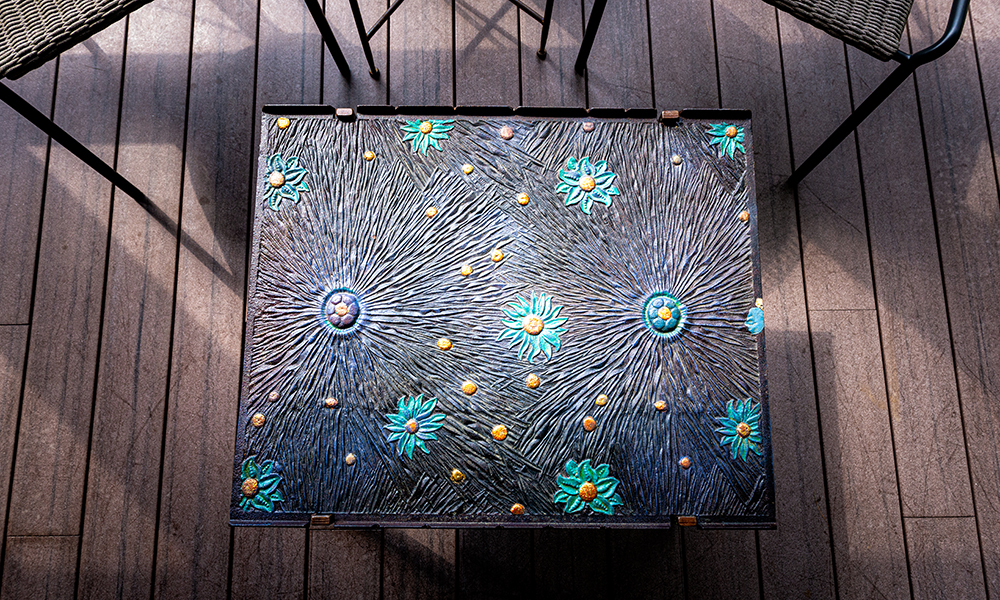 A table Barney Bellinger and his wife created for Kevin Bright, which sits in his screened-in porch. (Francesco D'Amico)

If you count yourself among Kevin Bright’s friends—the ones that don’t get starstruck by the fact that he was once the executive producer and occasional director of hit sitcom Friends—you’ll know that his rustic Saratoga County home is filled to the brim with knickknacks, doo-dads and all manner of memorabilia. “I’m a collector,” says Bright, who is constantly acquiring new objets d’art, many through his interior design guru Edmond DeRocker.

Though Bright has amassed an enviable collection of oddities, everything from vintage concert posters and photographs to miniature medical supplies, he’s most proud of the whimsical pieces he’s sourced from local artists like Scott Hook (“American Horse WOOD Designs” on Facebook) and Barney Bellinger (facebook.com/BarneyBellinger), both of whom have studios in the same 20,000-square-foot building near Gloversville.

Bellinger, a self-taught painter, sculptor, photographer and furniture designer who’s been at his craft for more than five decades, has pieces peeking out of every corner of the Bright home. (Fun fact: Bellinger owned a sign company in the ’80s that produced the unmistakable signage for former Saratoga business like Lillian’s and Mabou.) He and his artist wife, Susan, co-created the coffee table that Bright has on his screened-in porch, fashioning it from an old cast-iron fireplace part (Susan painted the flowers on it, and the two added variegated gold leaf to the center of each flower). A handmade ’50s ashtray, which features shotgun casings in place of smokes, was given to Bright by the artist, after he took a shine to it. “He’s a genius,” says Bright, “at making other people’s trash into treasures you never could’ve imagined.”

Hook, on the other hand, has for 20 years been a full-time carver whose sculpting weapon of choice is a chainsaw. Two of Hook’s pieces have made their way into Bright’s orbit so far: a bear carved from a single slab of wood (save for the bear’s sharp little grill), which menaces passersby on a path near Bright’s pond; and his latest masterpiece, a 9-foot-tall, 1,500-pound Buddha, which Bright and his wife, Claudia Wilsey Bright, commissioned and which took Hook six months to complete. “It was one of those things that you can only do so much of it at a time,” says Hook. “Everything had to be pretty exact, because [the Brights] picked a statuette and a design that they wanted it to follow.”

If you’re thinking about taking a trip out to Hook and Bellinger’s studio space, they’re both highly approachable and would be happy to show you around. In other words, you don’t have to be a TV star like Bright to gain entry into their world. “People have conceptions about country artists—that they work with bottlecaps and rotten, old copper piping,” says Bright. “It couldn’t be further from the truth.”