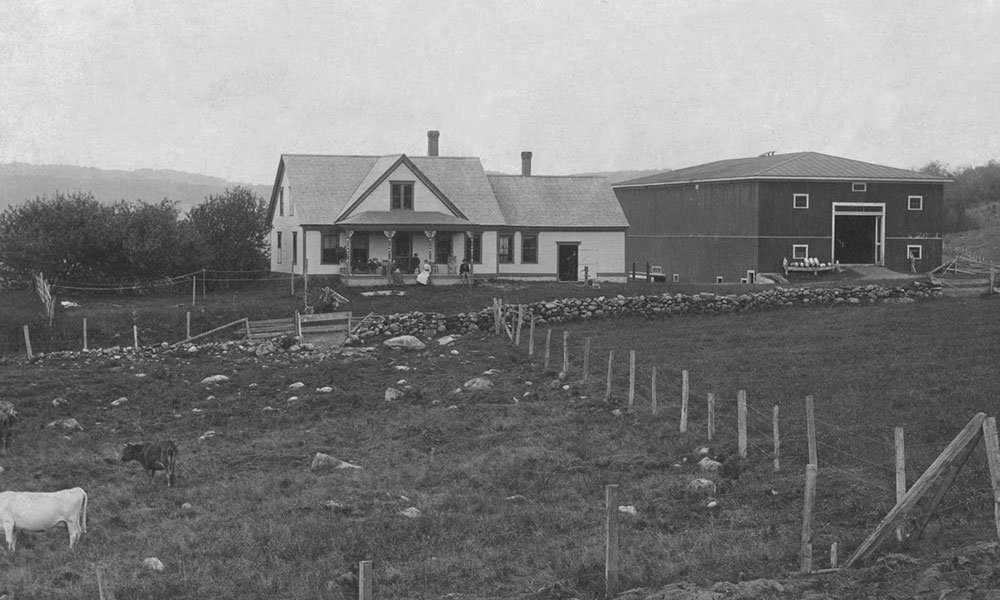 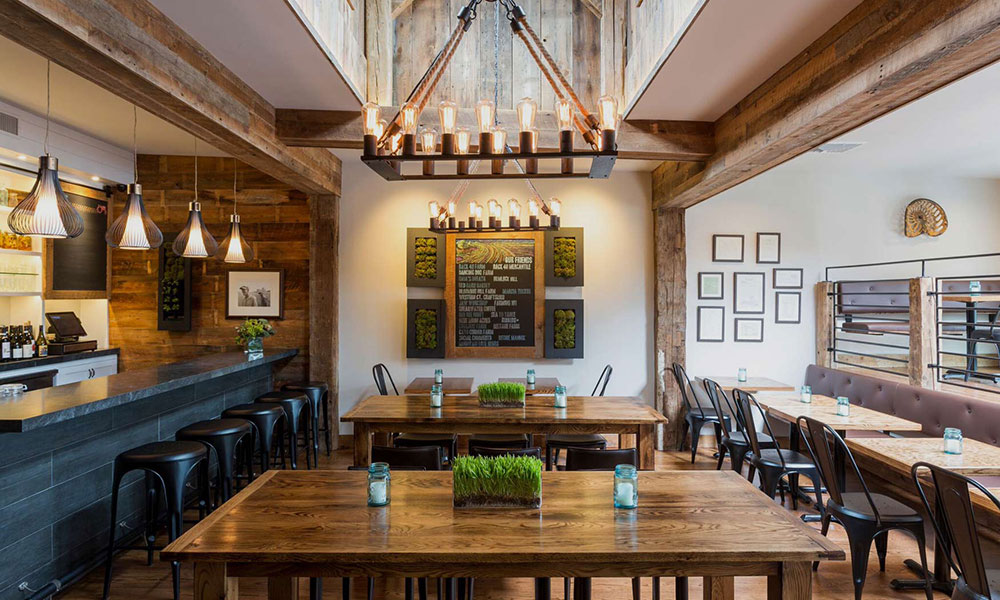 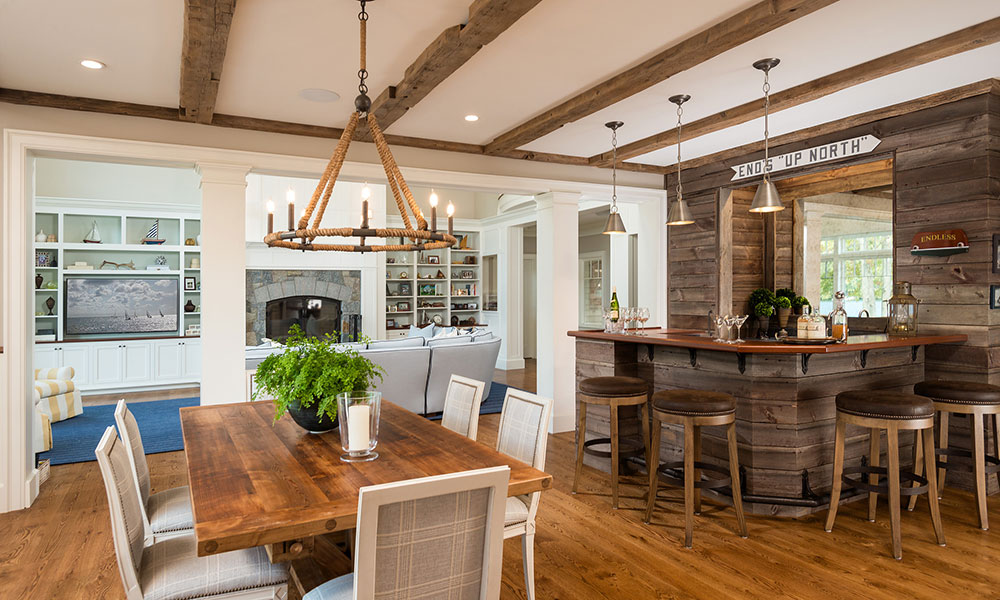 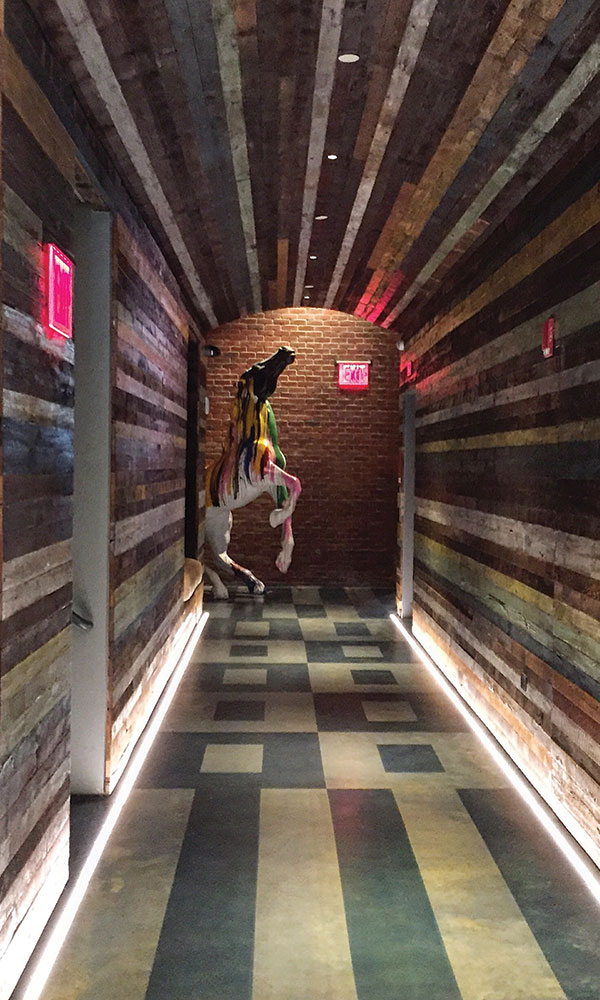 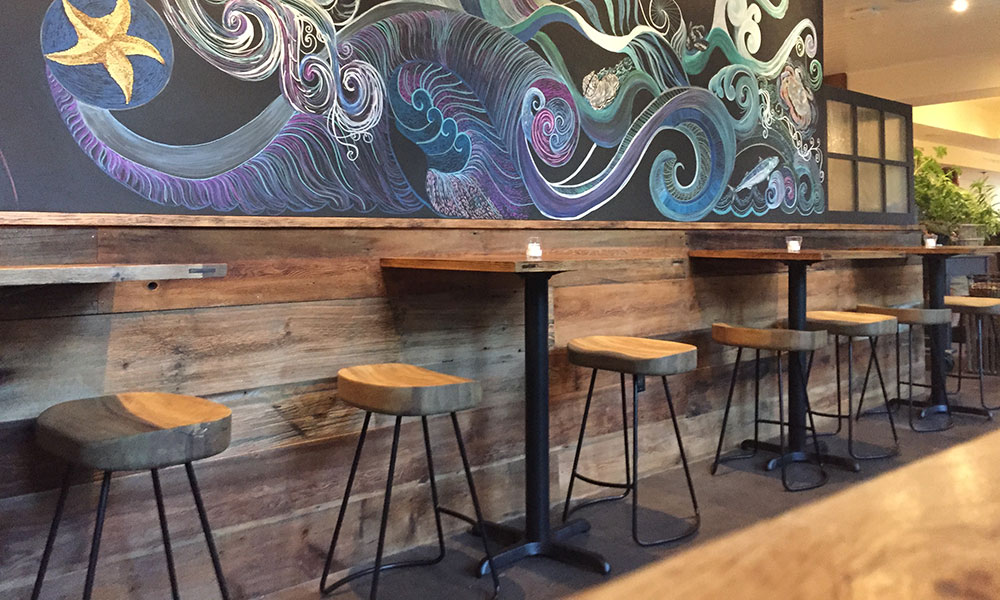 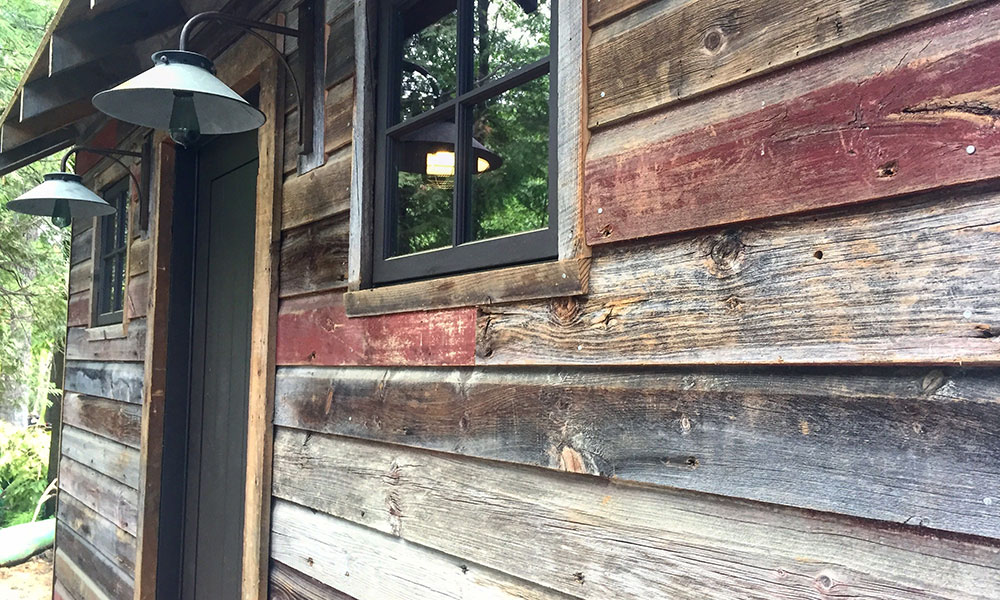 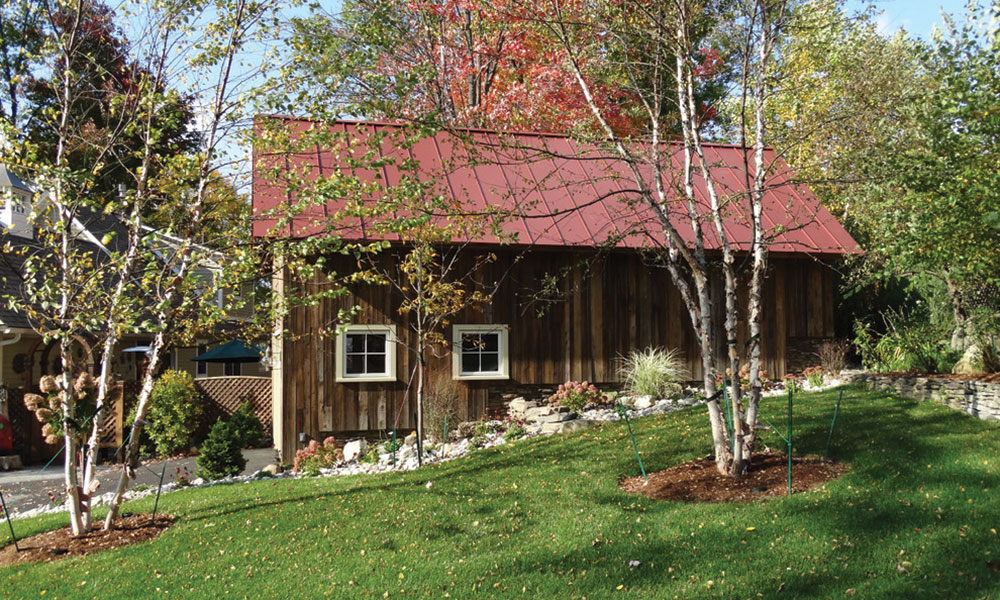 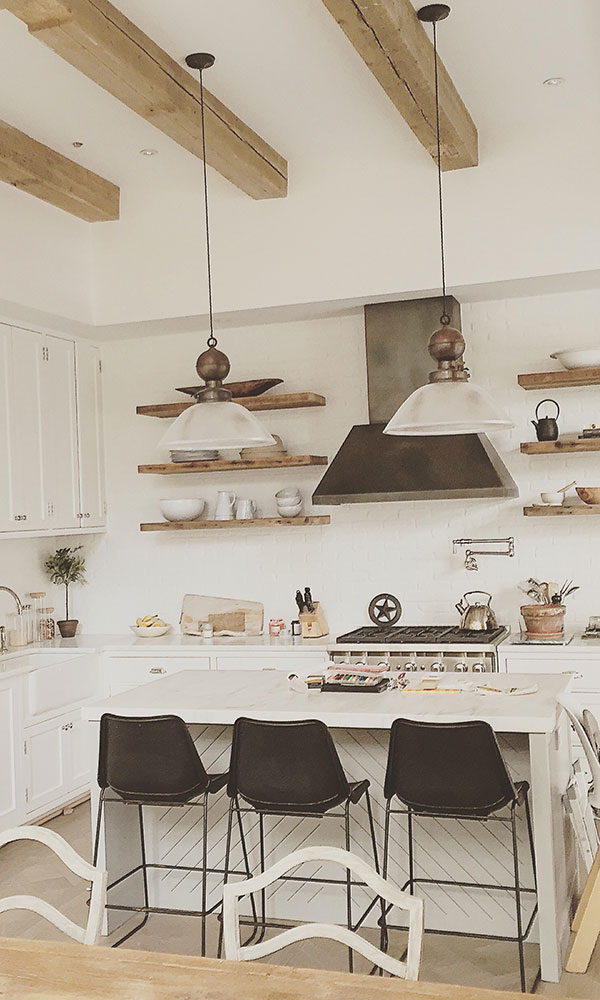 The Ryegate barn (at right) that provided the lumber for Gabriel Kreuther in NYC. (StoriedBoards)

StoriedBoards provided the wood used inside the Back 40 Kitchen in Greenwich, CT. (StoriedBoards)

StoriedBoards' "barn board" covers the walls and ceiling in this Hotel Indigo hallway in Manhattan. (StoriedBoards)

In 1876, John H. Symes returned home to Ryegate, VT, to care for his aging parents and tend to the family farm. The grandson of a Scottish immigrant, Symes had served as a private in the Union Army during the Civil War, seeing action in North Carolina in the 1860s. After his parents’ death, Symes inherited the property, which included a farmhouse that his father built in 1824, and he immediately began to lay the groundwork for a barn adjacent to the house. Using mill-sawn hemlock lumber, Symes constructed a three-story barn with a low-pitched, 5000-square-foot roof supported by a cantilever frame—a true architectural feat, considering the heavy Northern Vermont snowfalls it had to bear each winter. When it was finished, the barn stood 40 feet tall, complete with cattle stalls, an internal silo and a chicken coop. Throughout the first half of the 20th century, the barn housed Clydesdale horses used in the area’s logging industry. Fast forward to 1970, and the property was sold to a family who would use the farmhouse as a summer home. However, they were unable to maintain the barn, and by 2010, a portion of its roof had collapsed.

On an unseasonably warm night in Midtown Manhattan, right across from Bryant Park on West 42nd Street, diners nibble on foie gras at Gabriel Kreuther, Trip Advisor’s sixth-rated restaurant in New York City—that is, out of 9,632 other eateries that dot the Big Apple. Around them, amid a copper- and stork-themed interior (courtesy of The Adelphi Hotel’s codesigner, Glen Coben), antique wooden beams rise toward the ceiling, forking into Ys near the top. They stand out in the dining room, which exudes an ultra-chic, modern aesthetic. It’s clear that they served a purpose long before Gabriel Kreuther planted them in his newest culinary venture. And it turns out, they did: They’re none other than the mill-sawn beams that held John Symes’ barn together.

The company that transformed Symes’ barn into posh restaurant decor is StoriedBoards, a family-owned, reclaimed lumber retailer headquartered in Lake George. Founded in 2012, the company has made a brisk business of tracking down dilapidated barns, stripping them and reselling their wood for use in homes and businesses such as Gabriel Kreuther. Old barn siding is transformed into “barn board” accent walls, beams are turned into fireplace mantels and rafters are repurposed as custom furniture. StoriedBoards’ creations have been featured in David Burke’s restaurant, Fabric; Nusr-Et, a restaurant by Internet sensation Nusret Gökçe, a.k.a. Salt Bae; and locally, at the L.L.Bean store in The Factory Outlets of Lake George.

When I walk into the StoriedBoards “office”—a sort of tiny-one-room-schoolhouse-meets-primitive-ski-lodge—I’m greeted by an exuberant, three-month-old golden retriever named Kentucky, followed by his owner, Garrett Russell, one-third of the StoriedBoards team. Russell’s dad, Whitney, a lifelong entrepreneur, got the idea to launch the company after driving around Upstate New York and seeing all the beautiful, abandoned properties. When Garrett’s brother, Tyler, moved back home to run the business, Garrett signed on as well. “We started to hone in on ‘How do we reclaim barns? What do we do? What’s our differentiator?’ It dawned on us that nobody sells it with the history attached,” says Russell. “That was our plug. Once you start to dig in and see where these people came from, what they did and why they built these great barns on these awesome properties, that’s the coolest part of it.” Every product StoriedBoards sells comes with a booklet recounting the history of the place where the materials came from—like the Symes’ family barn, built in the 1880s.

Out back, Russell shows me the 6000-square-foot warehouse where StoriedBoards’ actual storied boards are stored. The entire perimeter of the building is filled to the rafters with lumber, a large portion of which came from an old rack system in Building 177 at the Portsmouth Naval Shipyard in Portsmouth, NH. That’s the farthest the StoriedBoards team has ever traveled to reclaim wood, but Russell tells me they’d travel as far as they’d need to for a top-notch yield. (The Portsmouth project required nine tractor trailers to haul off all the material.) The warehouse also houses StoriedBoards’ “barnifacts”—antique items that the Russells find on reclamation sites and can’t throw away, like old tools, cans and license plates. These items are for sale online, or are picked out by customers when they come to the warehouse to choose wood for a project. “We have an open-door policy,” Russell says. “You can come up any time. We love to learn about what the project is and see how we can get exactly the look and feel the customer is looking for.”

The sheer fact that the company is based in Lake George is a boon for business and working with StoriedBoards’ customers, says Russell. “It helps a lot that we live in a desirable town to come and visit that has a very recognizable name. It’s easy to make a weekend trip out of it, if you’re looking to come up and look at materials. Also, it helps that we’re close to Saratoga: If you’ve never heard of Lake George, you’ve probably heard of Saratoga.” Speaking of which, StoriedBoards also has a production facility just north of Saratoga in Wilton. I followed Russell south on I-87 into an industrial park just off Exit 16. The warehouse in Wilton was also stacked high with lumber—but this haul had already been sanded, cleaned and cut into fireplace mantels, the main product produced at the Wilton facility, along with other furniture, such as coffee tables. “There’s something about old wood that you don’t get these days,” Russell said. “Most of our customers are looking for that piece. They want something really cool from a barn that has a really cool story.” Sitting down to write this article at the multicolored, spalted maple kitchen table my dad built himself using wood from his friend’s property in Grafton, NY, I know exactly what Russell means by that piece. And I’m sure Chef Gabriel Kreuther, walking among the hemlock beams in his Manhattan restaurant, does too.