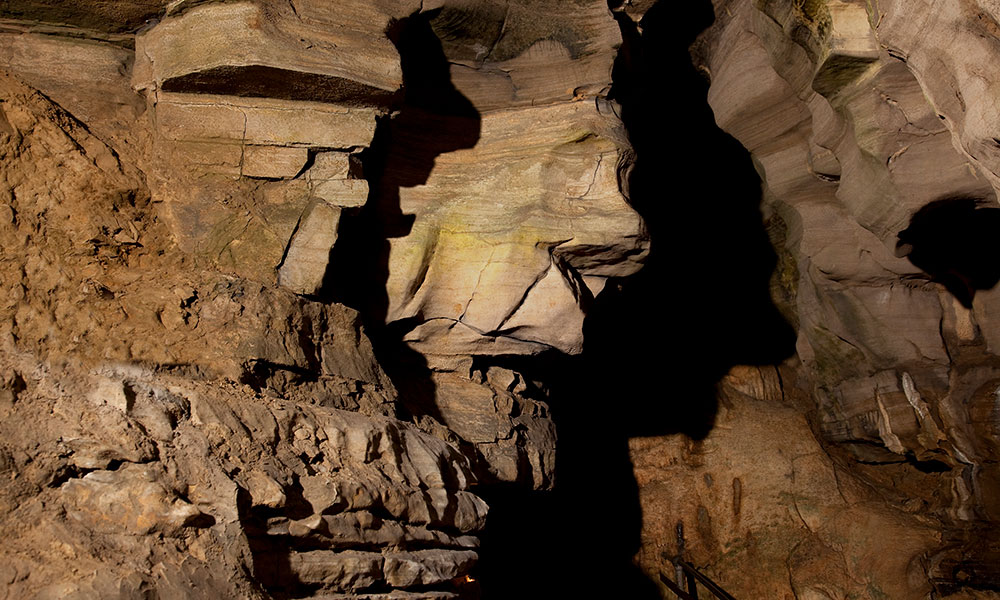 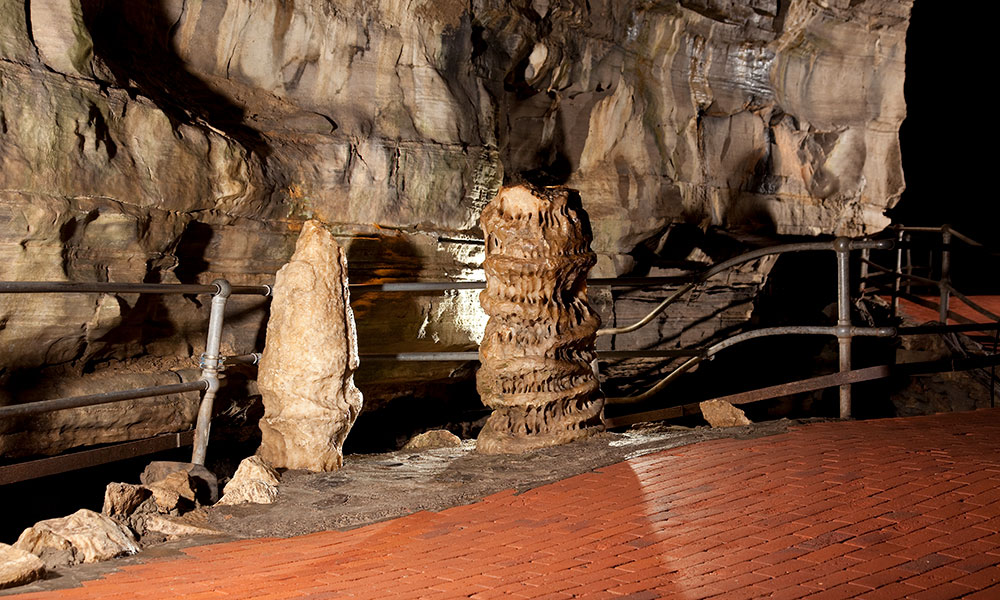 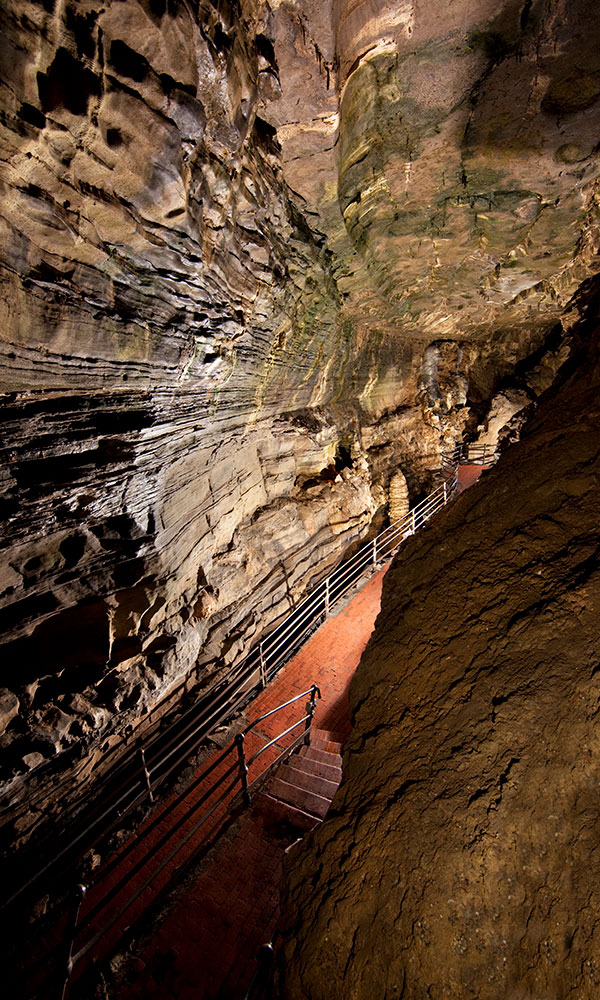 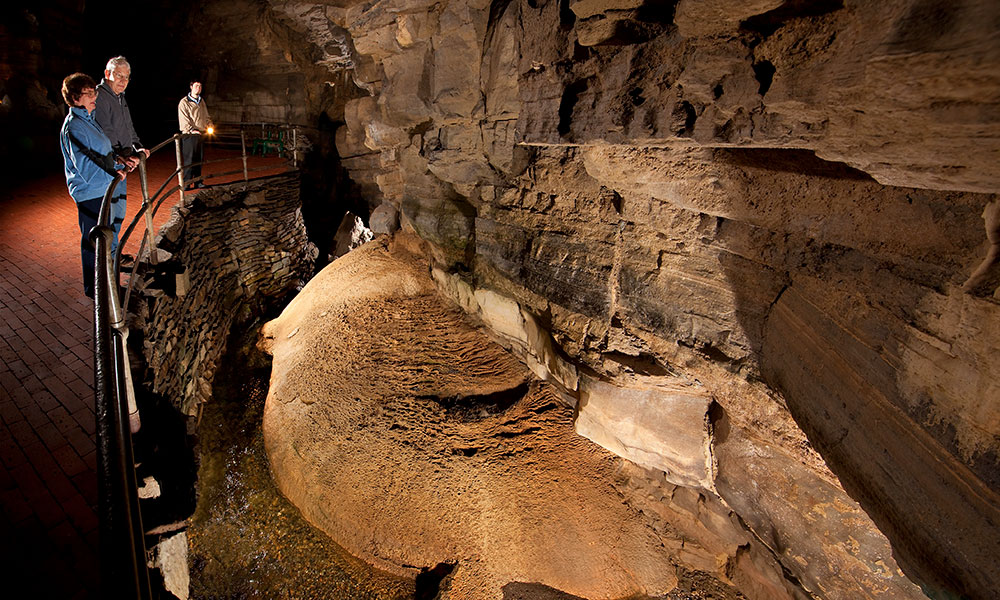 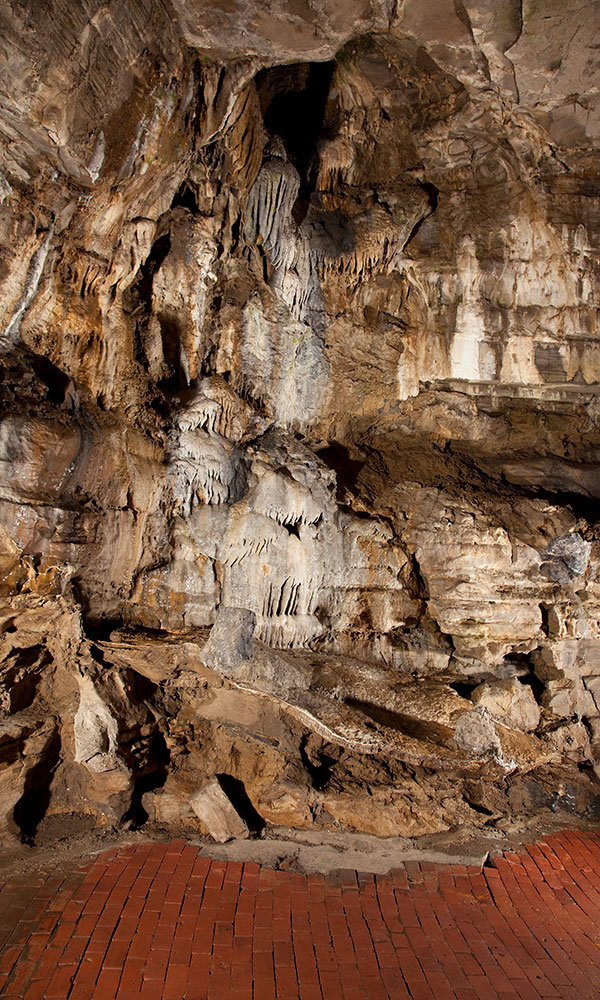 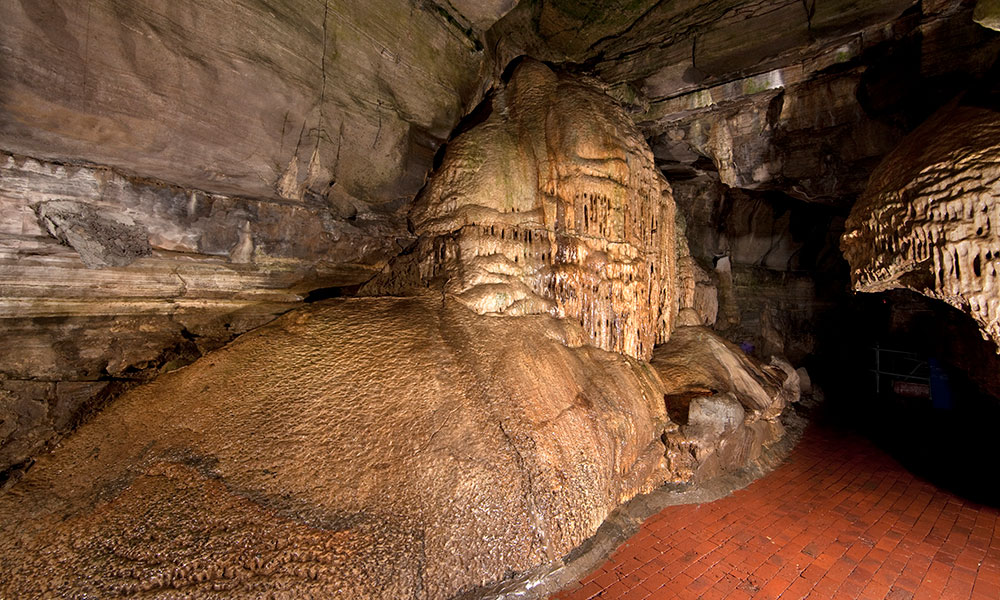 Howe Caverns is an enjoyable getaway on a hot summer day. But did you know there are parts of the cave that you can only book if you're a skilled spelunker? (Howe Caverns)

The rock formation known as the 'Leaning Tower of Pisa' at Howe Caverns. (Gary Berdeaux)

One of the circuitous pathways that spider through Howe Caverns. (Howe Caverns)

Visitors on the normal tours to Howe Caverns are separated from the rock formations by railings. Not so for the off-the-beaten-path tours. (Gary Berdeaux)

Even the walls of Howe Caverns are a sight to see. (Gary Berdeaux)

Howe Caverns has come a long way since its early days, when 50 cents bought you an oil lamp, a bag lunch and tour led by dairy farmer Lester Howe. Back in the 1840s, the underground cave had neither lights nor railings nor walkways; tourists shimmied over flowstone formations at their own peril—and at great personal risk, considering they were surrounded by pointy stalagmites.

The Howe Caverns that we know today reopened in 1929, after two years and half a million dollars worth of renovations. And it’s a far more educational—and less dangerous—experience for tourists of all ages and ranges of spelunking ability. The standard hour-and-a-half-long tour includes 12 stops, during which guides explain the geologic and chemical processes behind the cave’s many impressive rock formations. “First stop is the Vestibules; next stop the River Styx, the stream that formed the caverns; then plant life and the bats that live in the other end of the cave; then the formations, the chemistry section—stalagmites, stalactites, flowstone,” says Richard Nathaway, a long-time employee of Howe Caverns. He rattles off more underground sights: Titan’s Temple (the largest room in the cavern); the Chinese Pagoda; the Old Witch of the Grotto; the Turtle; the Leaning Tower of Pisa; and the Pool of Peace. Visitors take a boat ride around the cave’s underground lake, and visit the Cavern’s bridal altar formation (or “heart stone”) before the tour is over. (Just under 700 couples have been married there, by the way.)

For most locals, this is old news; if you haven’t gone as a couple or taken your kids there for a cool-down on a warm, muggy day in August, it’s entirely possible that you went as a grade-school student yourself. But few know that they have the option of stepping back in time and experiencing the cave as it once was, in the days of Lester Howe—with a bit more peril re-integrated into the tour. According to Nathaway, Howe Caverns offers specialty tours that are “a little more intense” than the standard boat-and-walkway experience. The adventure tour, for example, requires spelunking gear and takes customers off the beaten path. “There’s crawling involved, and two big rotunda rooms. It’s a real spelunking tour,” Nethaway says. Howe Cavern’s newest tour, called the Signature Walk Discovery Tour, takes visitors on a three-hour adventure through a part of the cave that was closed for 100 years. “That’s the way Lester Howe and his tours did it; you have your own lamp. And there’s a formation down there called ‘Signature Rock,’ which has the actual signature of Lester Howe on it,” Nathaway tells me.

Whether you’re a diehard spelunker or its your first time in an underground cave, Howe Caverns has something for everyone. “It’s nature,” says Nathaway. “Our lifetime compared to what’s going on in the cave is not even a blip. If you come out of there and don’t learn anything, something went wrong.”

The Calendar: What To Do In Saratoga Springs This Weekend

What Would Woody Do: Saratoga's Kindness and Generosity Bubble