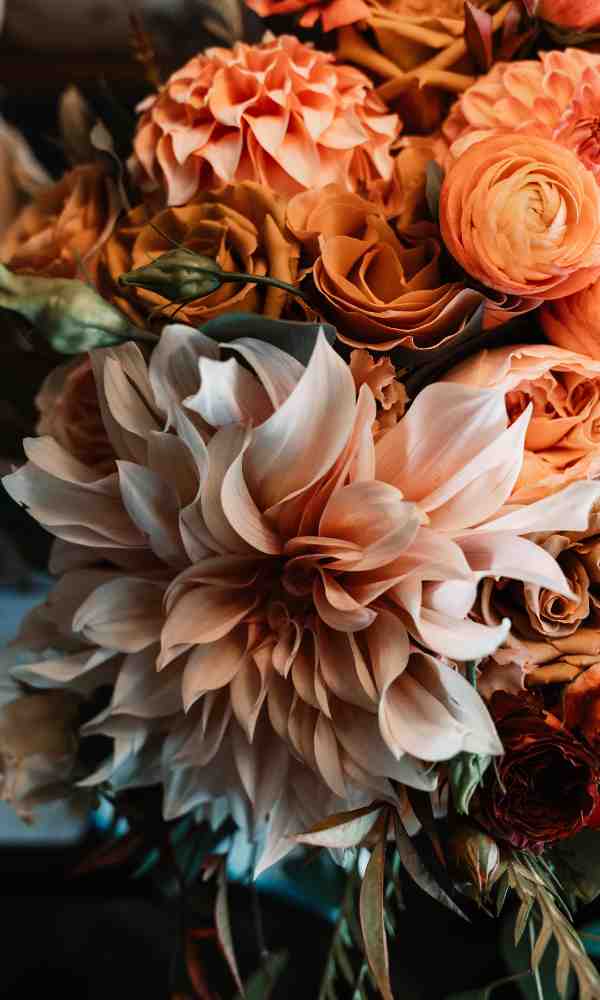 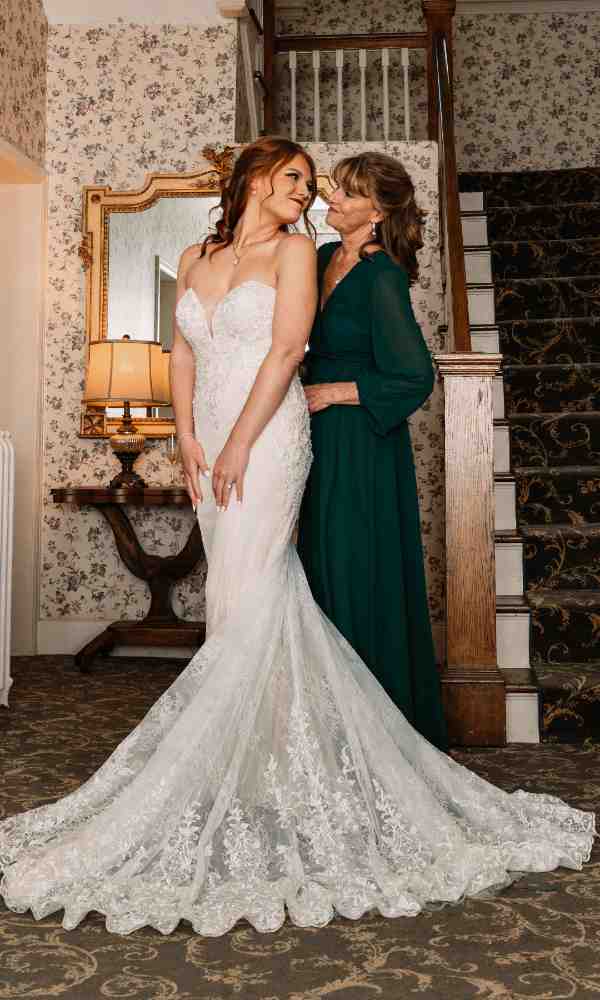 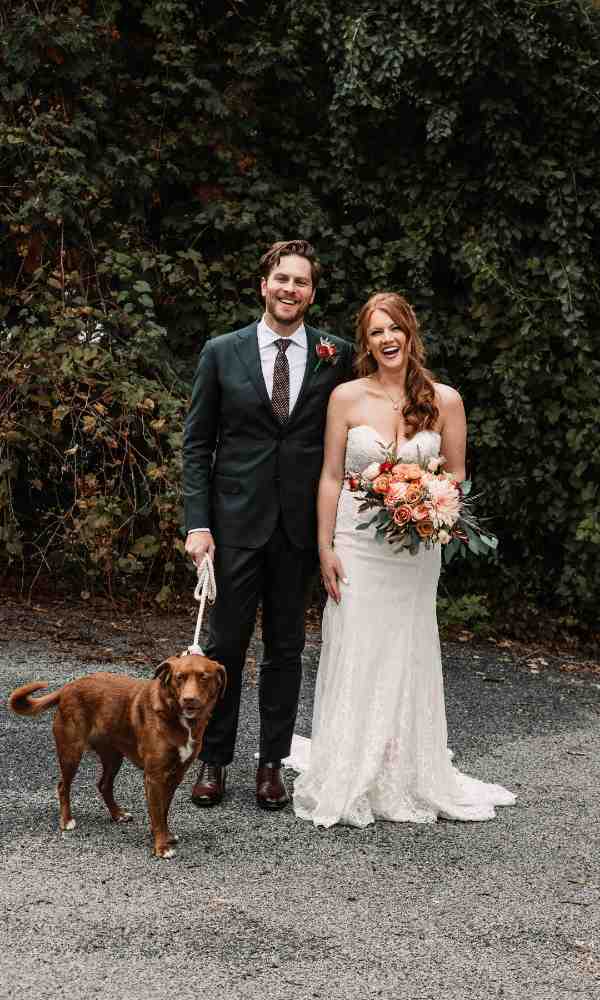 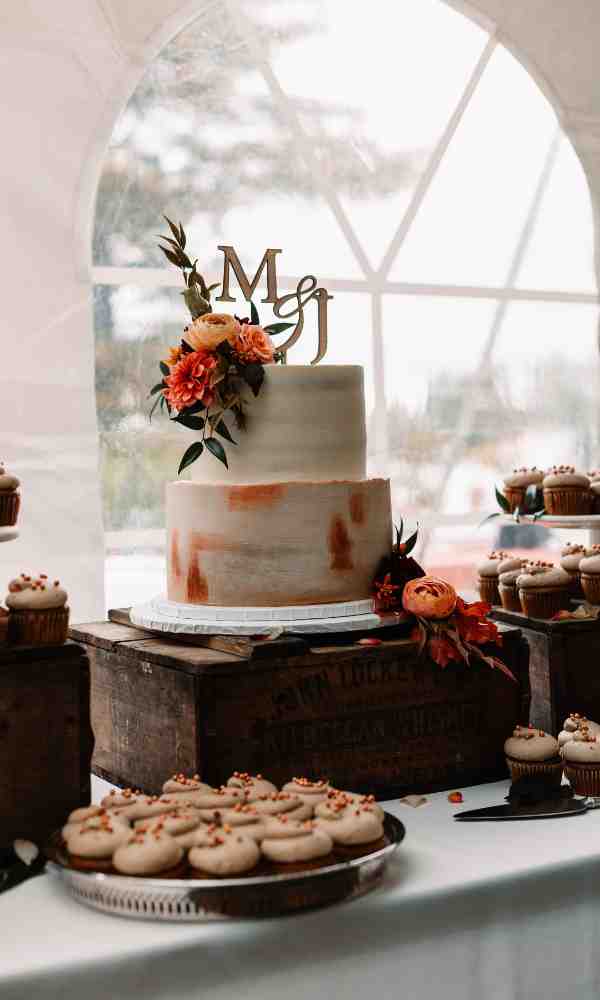 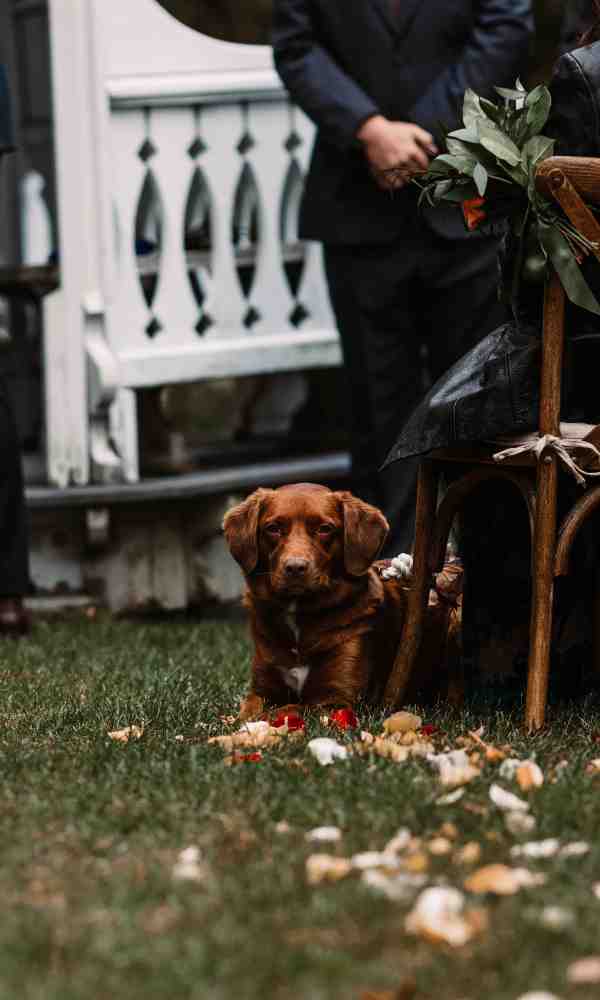 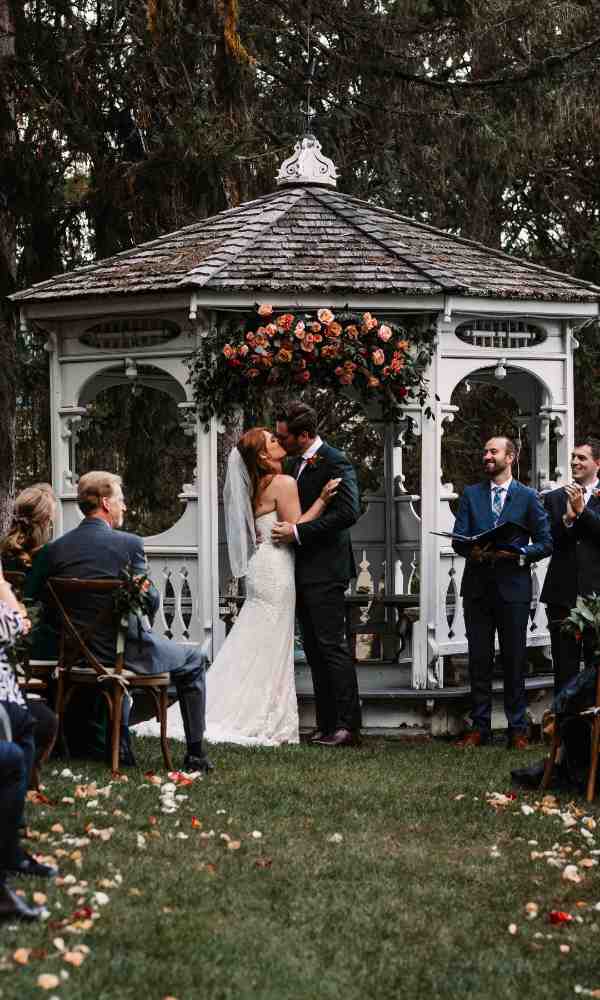 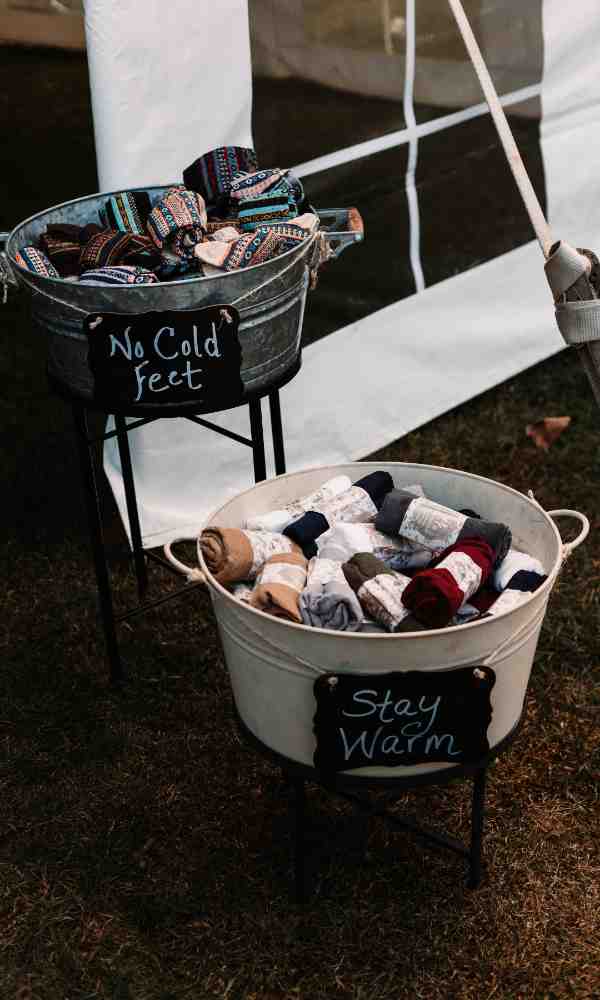 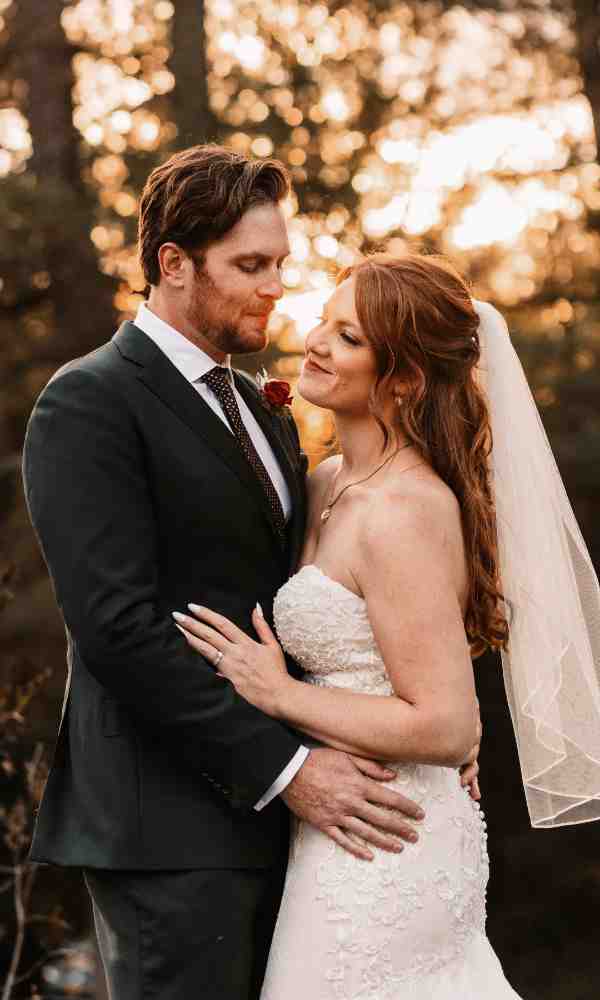 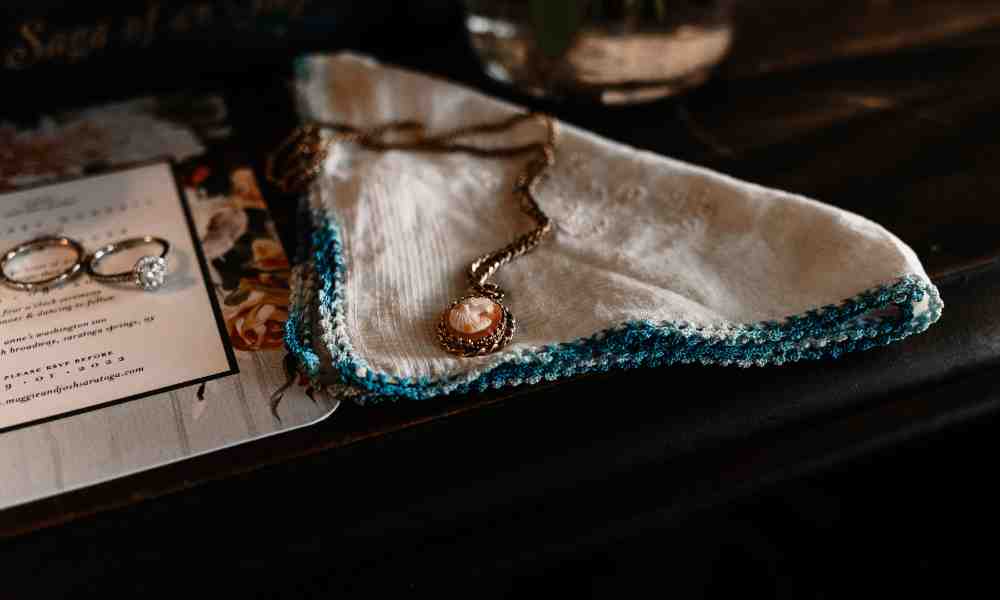 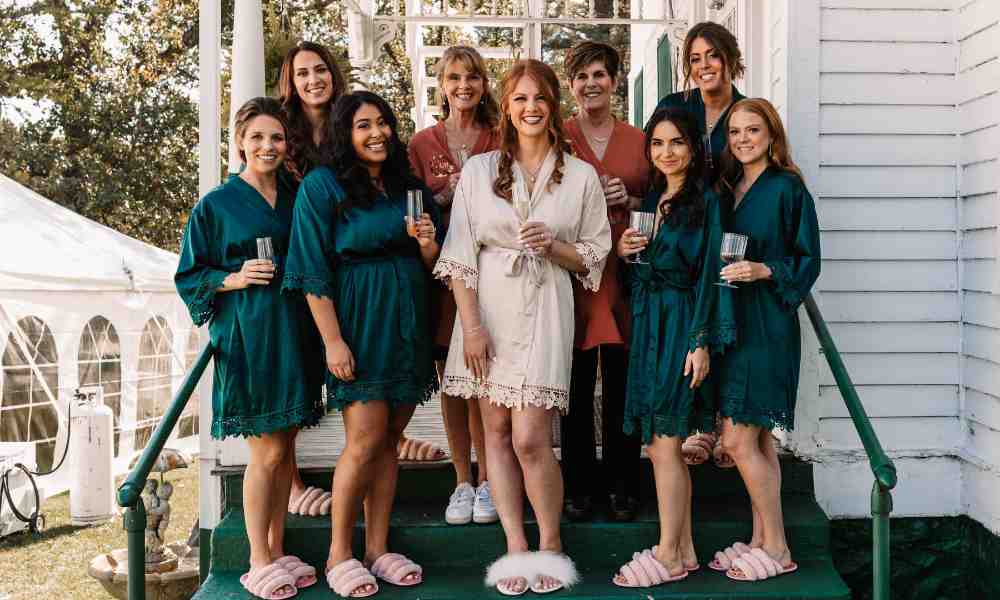 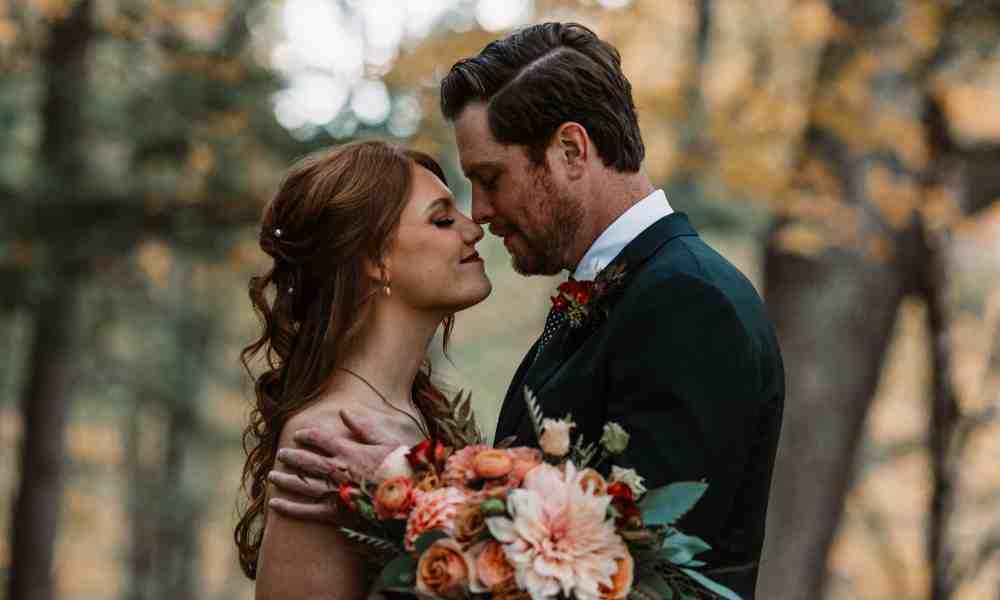 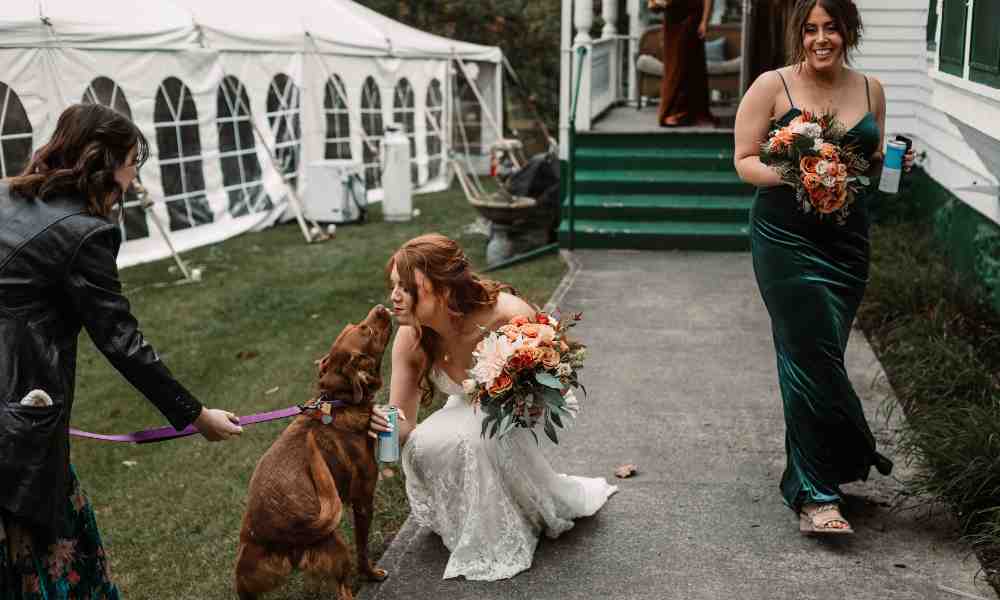 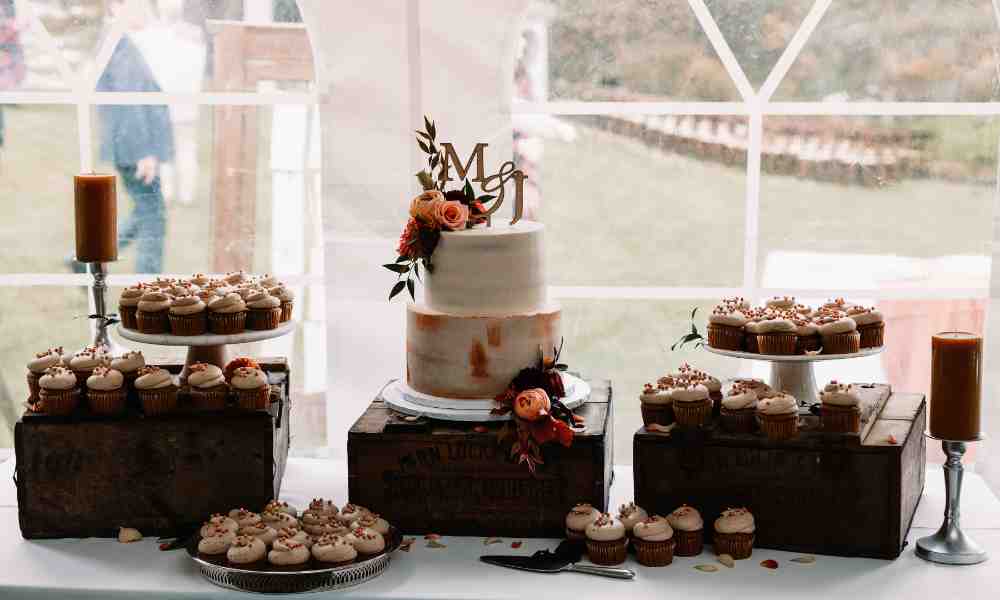 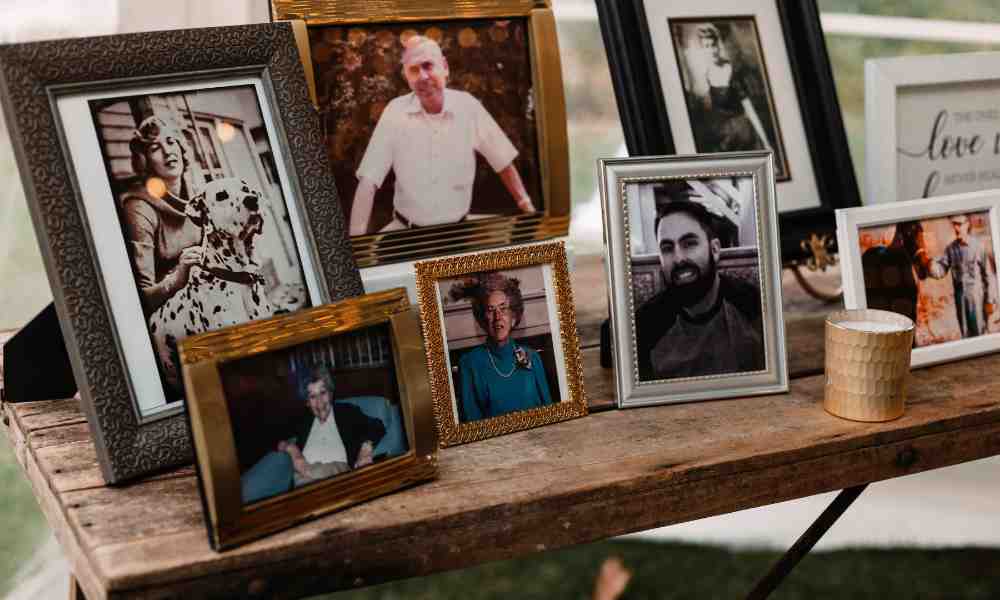 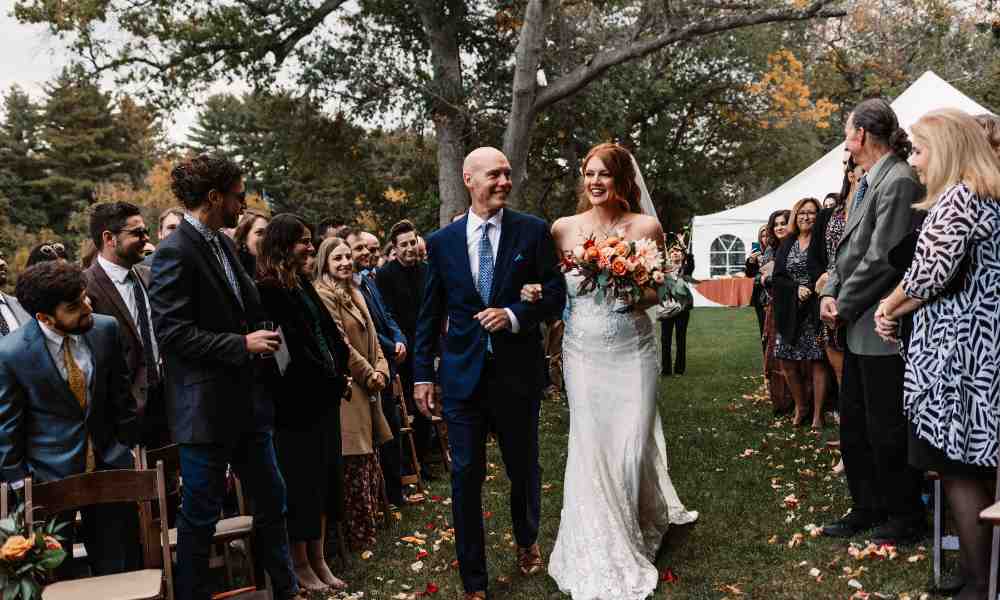 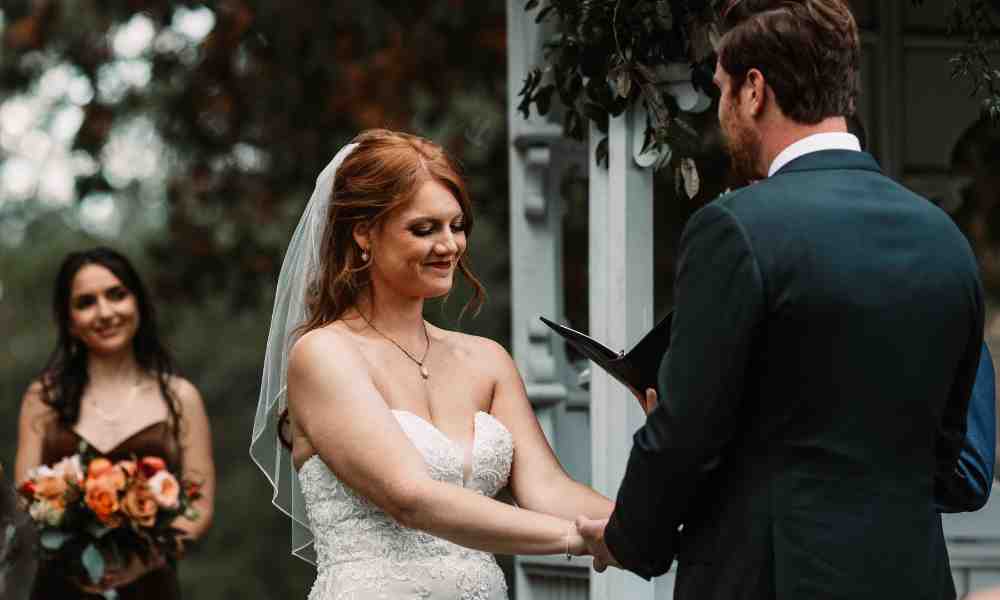 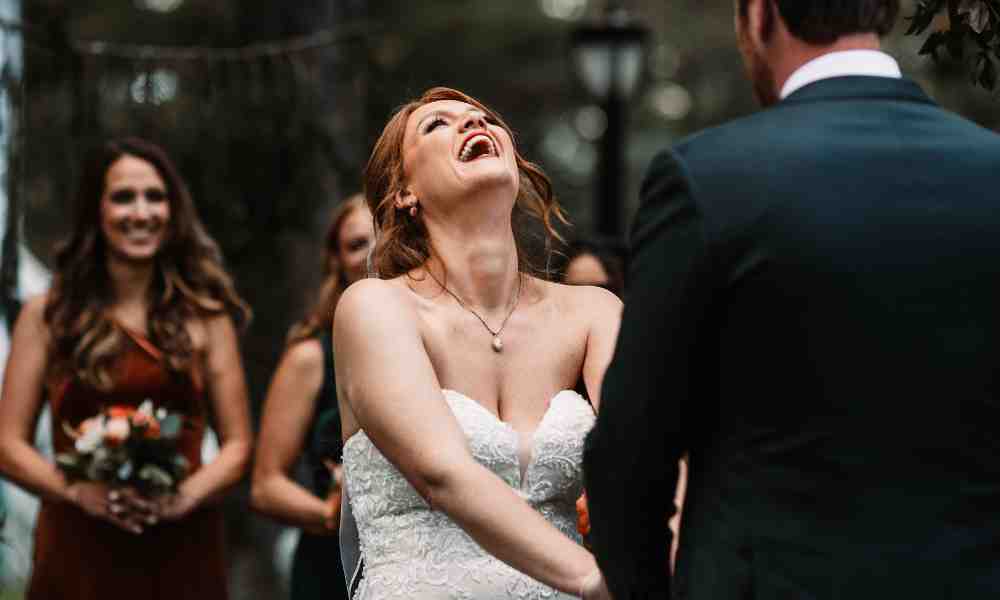 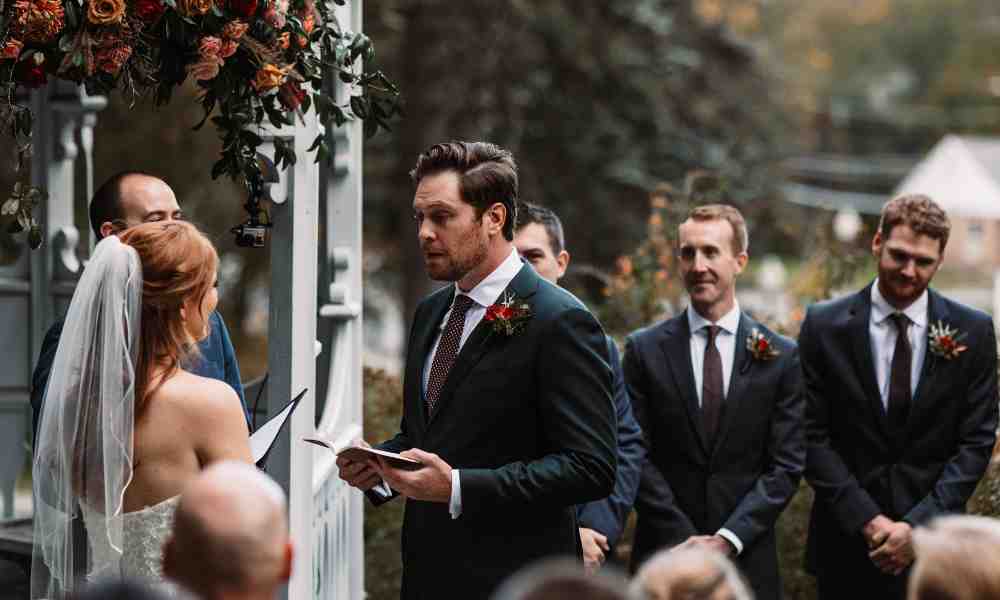 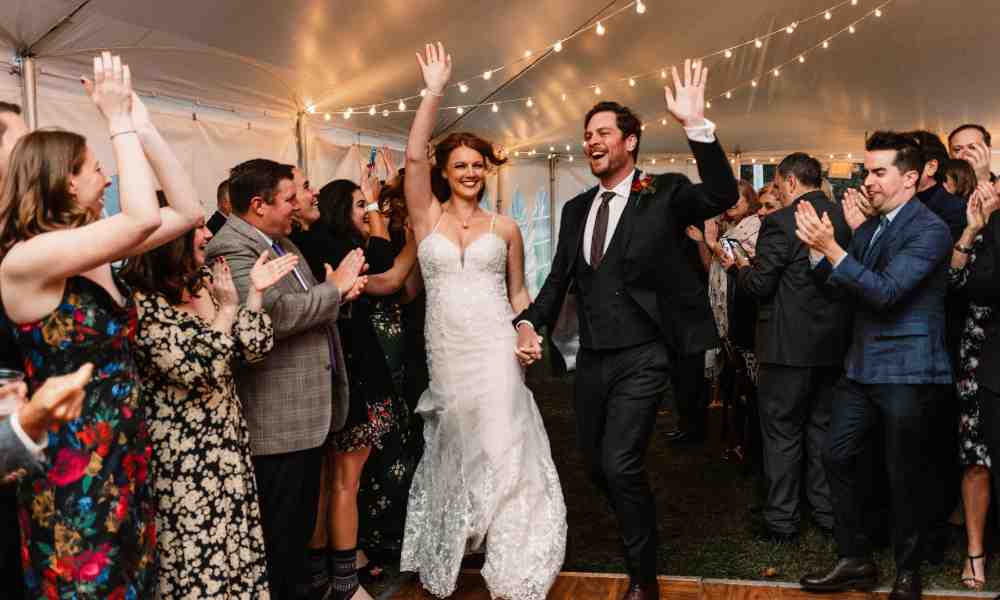 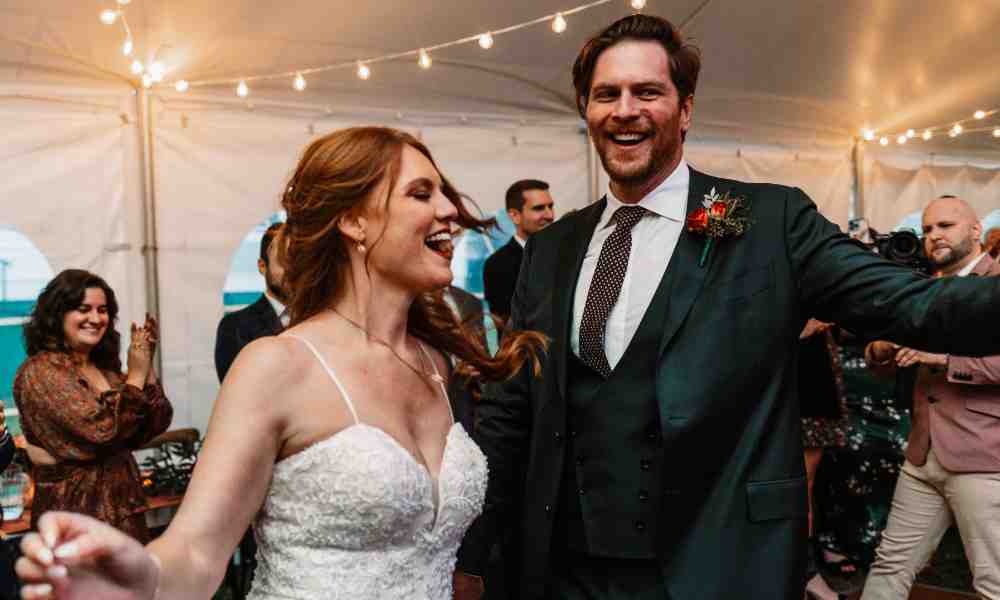 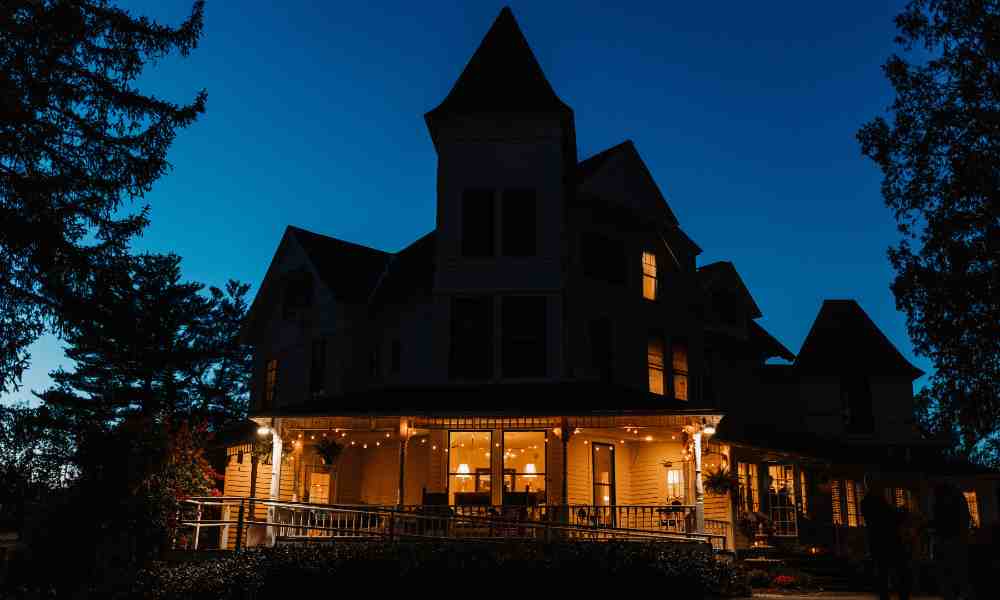 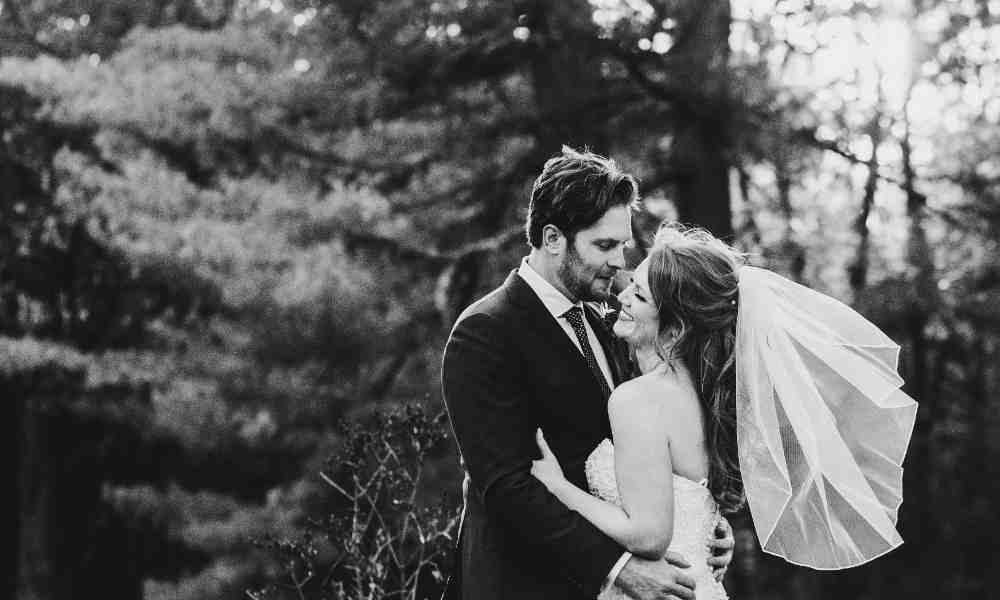 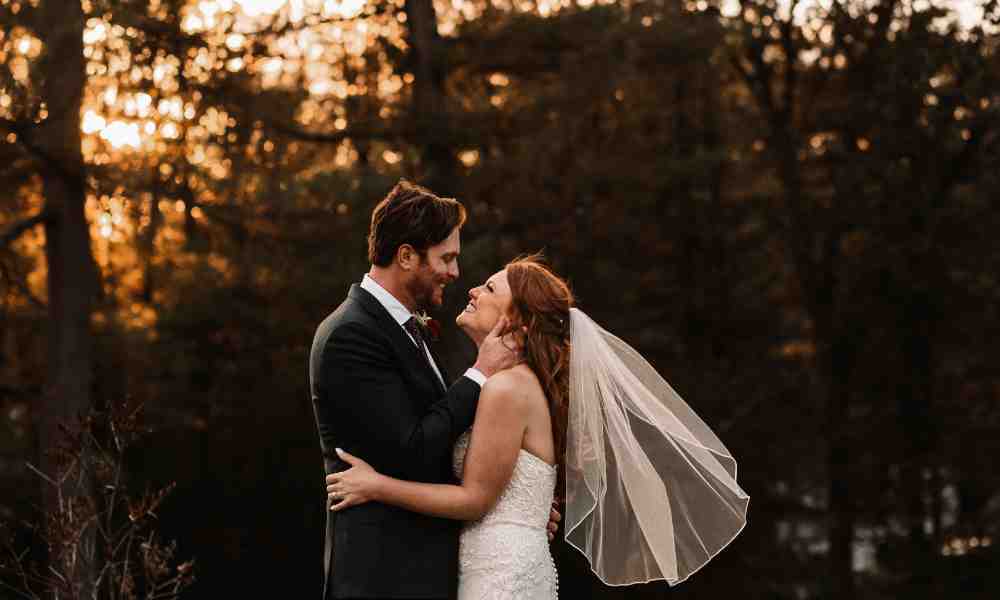 When Maggie Doherty called her real estate agent father in Saratoga and said simply,
“It’s time,” Dad swiftly went to work with palpable excitement. Doherty and her Hofstra University college sweetheart, Josh Zager, were ready to move back to her hometown, marry and start a family.

But first, the fourth-generation Saratogian and her beau needed a house. And Zager hadn’t yet proposed.

After 12 years of dating, the couple found their dream home at 174 Grand Ave. Then life sped up. In May 2021, Zager proposed (spoiler: she said yes) and the couple moved to Saratoga from Brooklyn. In August, they shot engagement photos at Henry Street Taproom (a favorite date spot and where they held their rehearsal dinner), and the couple that met as collegiate rugby players (she was a freshman, he a sophomore and the team captain) were ready to walk down the aisle at a modern Victorian garden party that was as Saratogian as you can get.

“It was a Saratoga event through and through,” Doherty says of her nuptials that took place October 9 at Anne’s Washington Inn, with catering by 9 Miles East. “I wanted the beauty and charm of Saratoga. This is where we want to raise a family, and we love it deeply.”

No detail was overlooked. The seating chart hung in a frame that once held the coming attraction announcements at an old theater (owned by an uncle of Doherty’s) that was once on the corner of Congress and Spring, and her “something blue” was her strapless fitted gown—with Victorian lace accents and beading, of course—from downtown boutique Something Bleu. “My ‘something old’ and ‘something borrowed’ were a Victorian cameo necklace and earrings, which are family heirlooms,” she says. “The necklace belonged to my great-grandmother. It’s a real Victorian piece that made its way through the Saratoga generations, and I wore it on my day.”

Not only were her flowers done by the brilliant local florist Samantha Nass, but there’s a connection there, too: Nass lives next door to Doherty and Zager, in a home once inhabited by some of Doherty’s relatives. “Sam brought our modern Victorian garden party to the next level,” Doherty says. “She did a stunning installation above the gazebo where we did the ceremony, beautiful arrangements for the tables, and the bouquets. The linens she chose were a gorgeous terracotta color, like spiced cider.” The bridesmaids wore velvet dresses in fall colors such as maple and hunter green, and Bread Basket Bakery baked cupcakes for guests and a small two-tier cake for the couple in a seasonal pumpkin spice flavor.

Once everything was perfectly in place, Zager was taken aback when he hit the aisle and saw his 160 wedding guests for the first time. “As I walked down the steps and started to walk down the aisle with my parents on my arms, it struck me just how many people had traveled to join us and given us so much love over all the years Maggie and I have been together,” he says. “Our lives wouldn’t be the same without everyone.” When it was Doherty’s turn to walk down the aisle, Zager “lost it” (his bride says with a giggle) and was comforted by a smiling Doherty. “I held his hand and told him to breathe,” she says. “I was grateful that I got to sit down before the ceremony and read his card—we had planned to have cards and little gifts for each other to get our center and bring everything back to the two of us. I got my emotions out then!”

Both the bride and groom work in the liquor industry—she represents Beam Suntory spirits via the PR/marketing firm Savona Communications, and he does online marketing as a director at the distributor Southern Wine & Spirits—so the signature drinks were important. They landed on a Ginger Smash (Doherty, Zager and their dog, Patsy Cline, are all redheads) made with bourbon, lemon and mint, and a Patsy Cline Paloma named after said dog, who was part of the wedding party. “And my dad brewed a home beer,” the bride says, “that he called Maggie’s Wedding Ale.” Garland Nelson, whom Doherty has known for 20 years, did the music. And after an emotional day, she was ready to let loose. “It would not be a Saratoga event without Garland!” she says. “I didn’t leave the dance floor once.”

Abby Tegnelia is the chief executive officer of Saratoga Living and Capital Region Living. She previously worked at New York magazine, Glamour and Us Weekly, and has contributed to Marie Claire, Women's Wear Daily and Maxim.

Saratoga coffeeholics have Clark to thank for their morning cup of Joe.

This year’s winter cocktails are next-level, so warm up at your favorite bar with one (or two) of these spiked masterpieces.

The frozen spectacle is expected to open later this January.