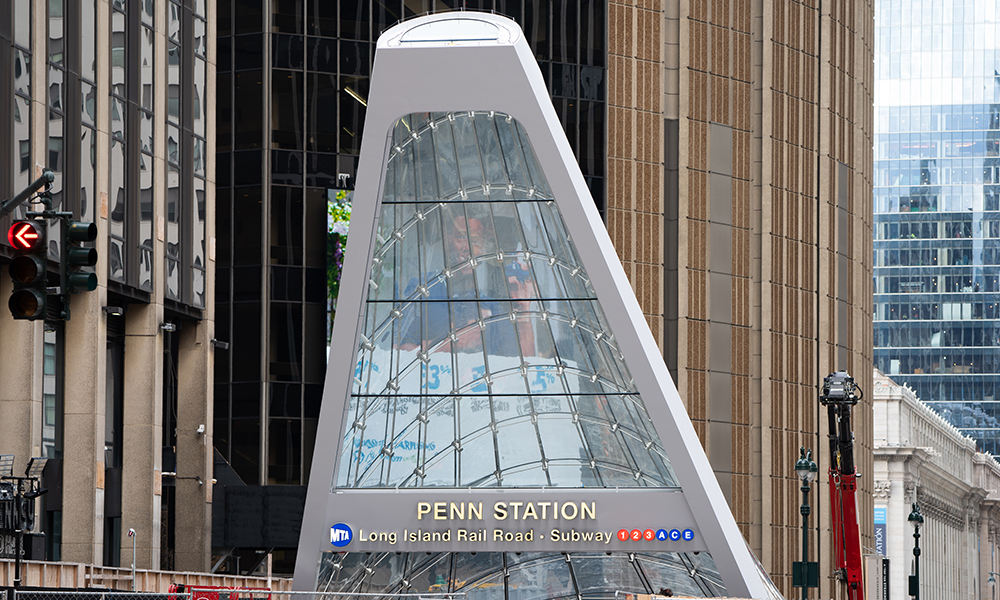 The entrance to Moynihan Train Hall, across the street from Penn Station on 8th Avenue. 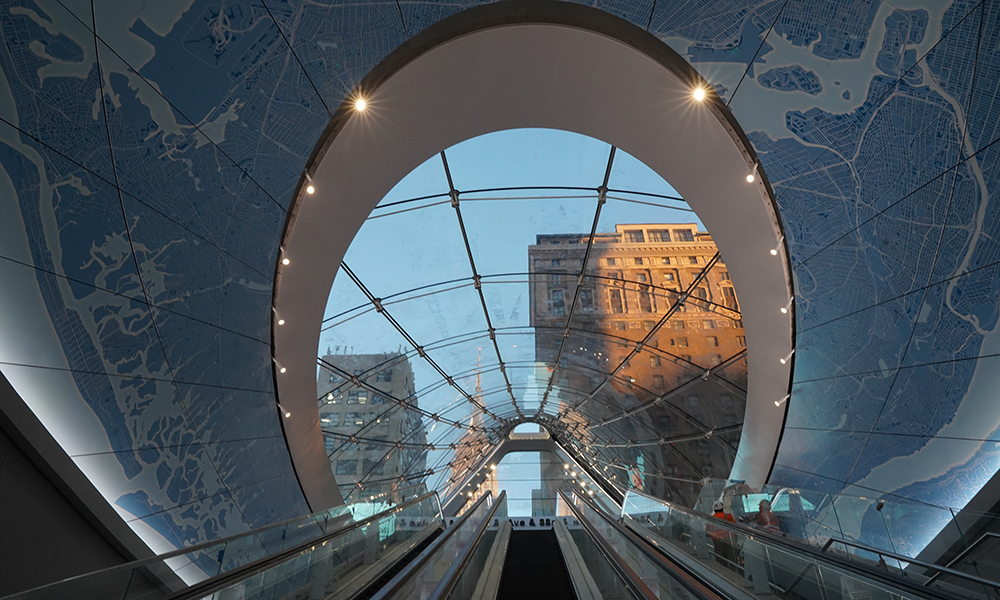 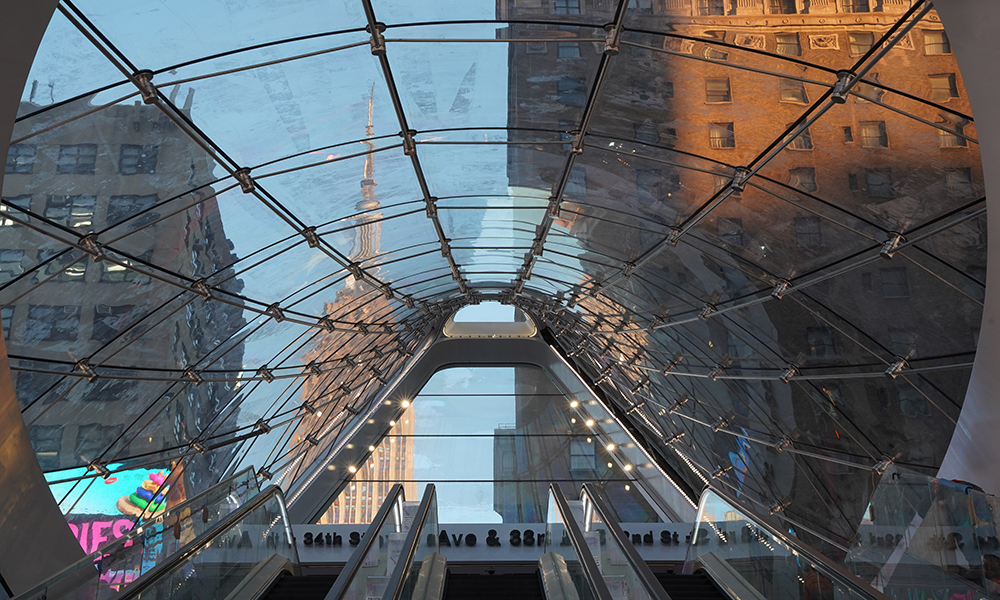 The stairs leading down to the train hall.

An upgraded seating area in the new Moynihan Train Hall. 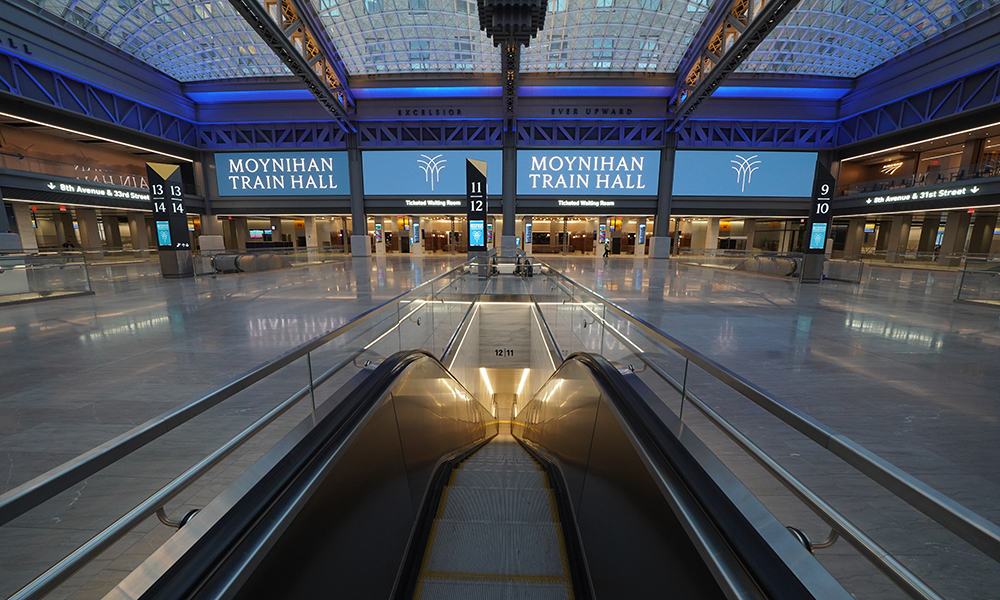 An escalator leading down to Tracks 11 and 12. 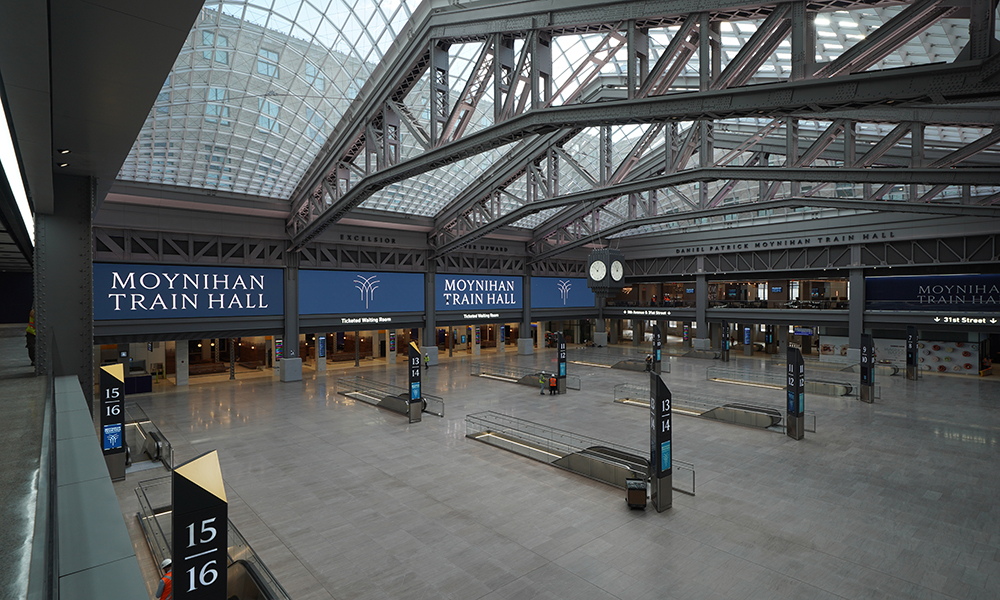 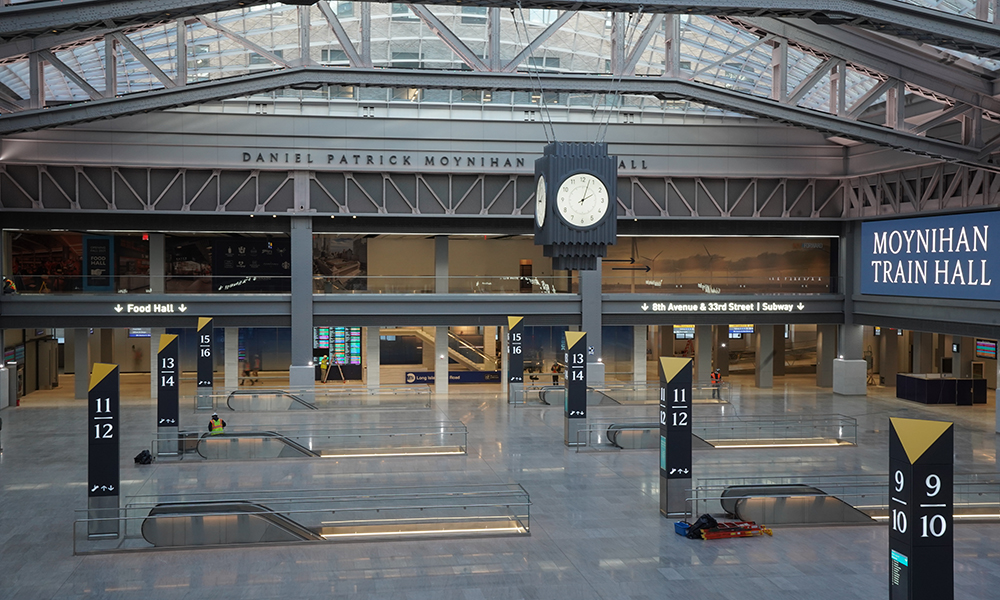 Moynihan's clock in all its glory.

Long before the pandemic and my resettlement in Troy, I would spend an inordinate amount of time on Amtrak trains, coming up from New York City’s Penn Station to see my family in Saratoga Springs—or barreling back southward again to return home to Queens or Brooklyn. And the whole experience, top to bottom, stressed me the hell out.

Penn Station was this massive, old, grimy cockroach of a building, filled to the brim with always-late, sharpened-elbowed travelers, who always seemed to be in need of rushing or running or pushing or (sometimes) scuffling. It was very much a cross-section of the Big Apple: faces of all different colors, speaking English, Chinese, Spanish, Italian, French and more; the transplants, the financial bros, the homeless, the blue-collar workers, the construction workers; military officers, police officers, firefighters; mothers, fathers, sisters, brothers, aunts, uncles and cousins. And children of all heights and widths being as naughty as possible.

However, everybody was there for the same reason: to get home.

I’m one of those people that always needs to be 30 minutes early to everything, lest I be late and the sky falls down, so I’d show up at Penn too early and be forced to camp out in the waiting room, filled to the brim with other dejected-looking people, who had maybe been forced there by a late train or were in the same boat as me. More often than not, if I was traveling upstate around the holidays, and there was inclement weather in the forecast—literally, just a flurry in the air—my ass would be in that waiting room. And there wasn’t always a seat to sit in.

Maybe most awe-inspiring about Penn, though, was its giant train schedule clock-board, seemingly operated, behind the scenes, by a million hamsters on wheels, which showed you when—if ever—the trains would be arriving or departing. And the worst part of it was, it would never show you your gate letter-and-number combination until the absolute last minute, so there would be a “running of the bulls” to that area every time—unless, of course, you’d memorized where your train always left from. The trains to Saratoga always left from the same two spots, so no matter how early I got to Penn, I was always way in the back of the line.

As of January 1, 2021, upstate Amtrak-goers, new and old, will be met with a much more modern face to NYC travel, if and when they take the pandemic plunge downstate. Amtrak, in partnership with the State of New York, will be opening Moynihan Train Hall—named for late New York Senator Daniel Patrick Moynihan—a brand-new boarding concourse in the city, which expands on the Penn Station of my not-so-distant memories. Its entrance will be located directly across 8th Avenue from Penn Station.

So what will travelers get out of the upgrade? For one, there will be a lot more amenities. Moynihan will feature a grand and spacious train hall, featuring a sky-lit atrium (see the accompanying photo gallery); dedicated customer waiting areas; a combined ticketing and baggage area; improved passenger comfort and security; accessibility for customers with disabilities; an inductive loop system for hearing assistance; complimentary WiFi in all customer spaces (!); and a dedicated lactation lounge for nursing mothers. For first-class travelers, Moynihan will also feature the new Metropolitan Lounge (formerly ClubAcela), a premium lounge space providing travelers priority boarding; expanded food and beverage offerings; a family waiting area; dedicated customer service agents; private restrooms; and complimentary WiFi.

Moynihan will be open to the public from 5am to 1am daily, with all additional hours being handled in the old Penn Station.

Says New York Governor Andrew Cuomo of the project: “This is a work of art in a way we don’t build anymore. And we [built] this not for ourselves. We [built] this for our children and our children’s children.” Amen.

Shock-a-toga: Tiz the Law, Winner of the 2020 Travers and Belmont Stakes, Retired