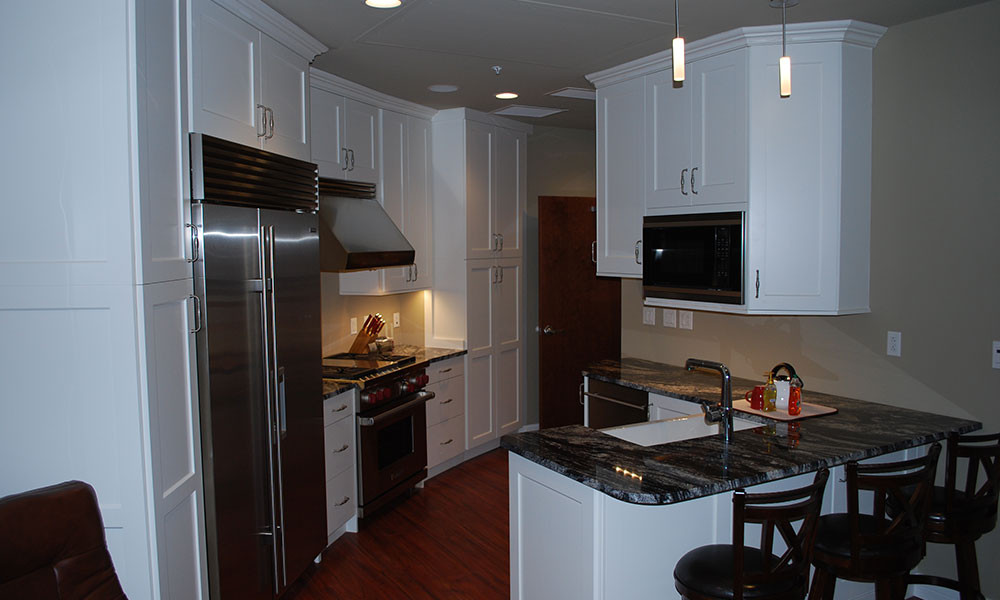 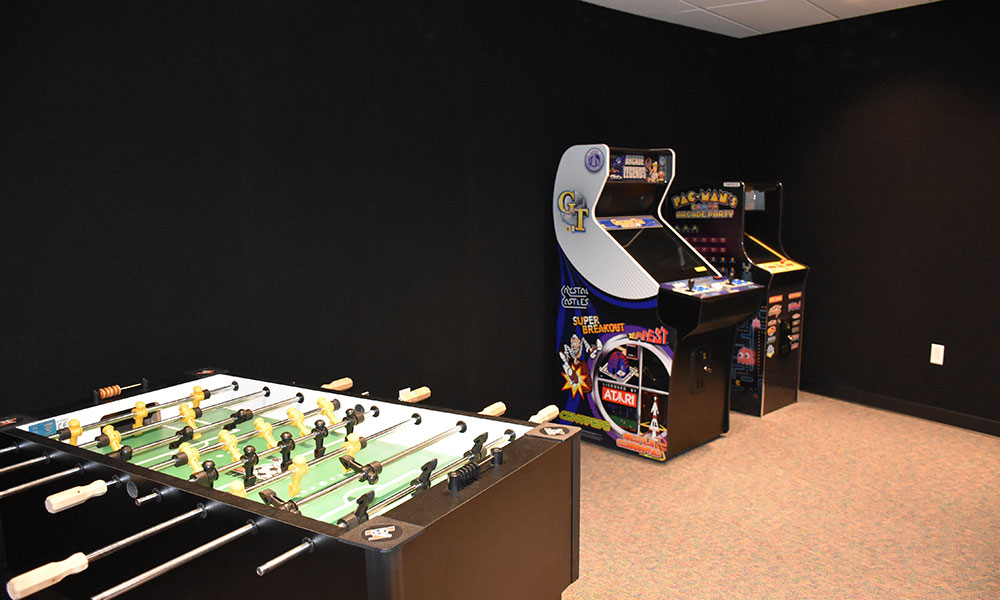 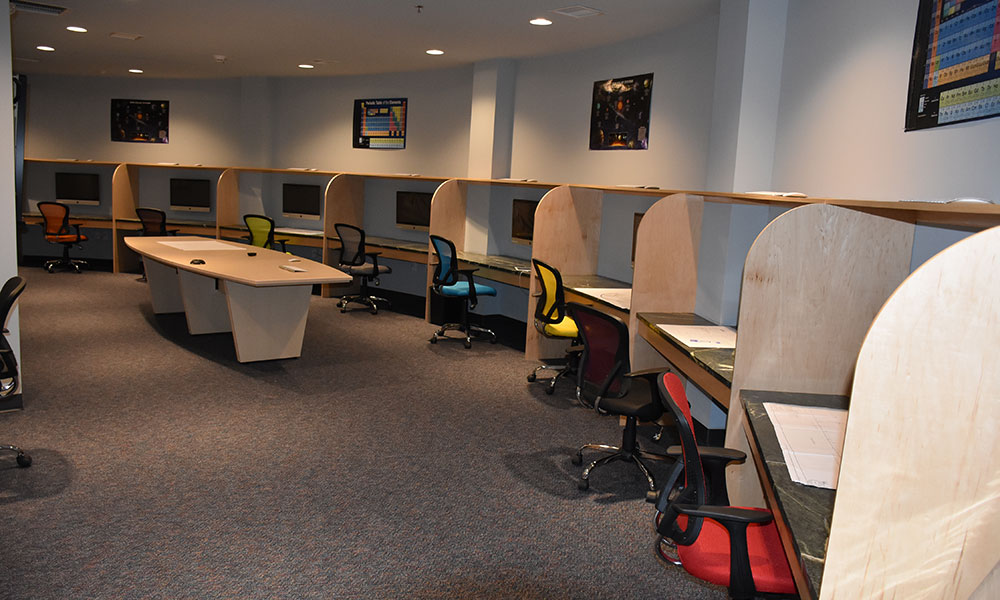 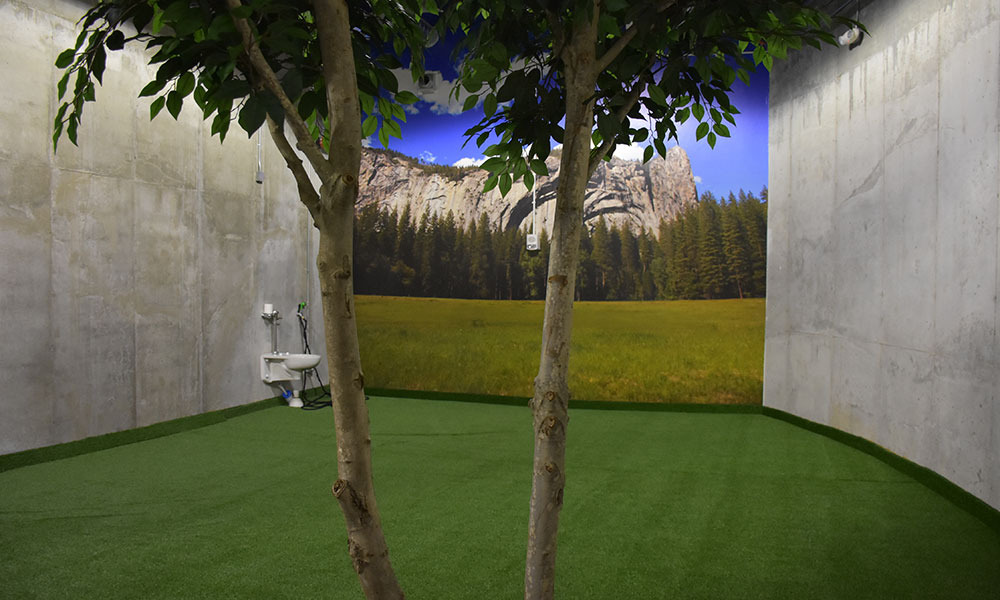 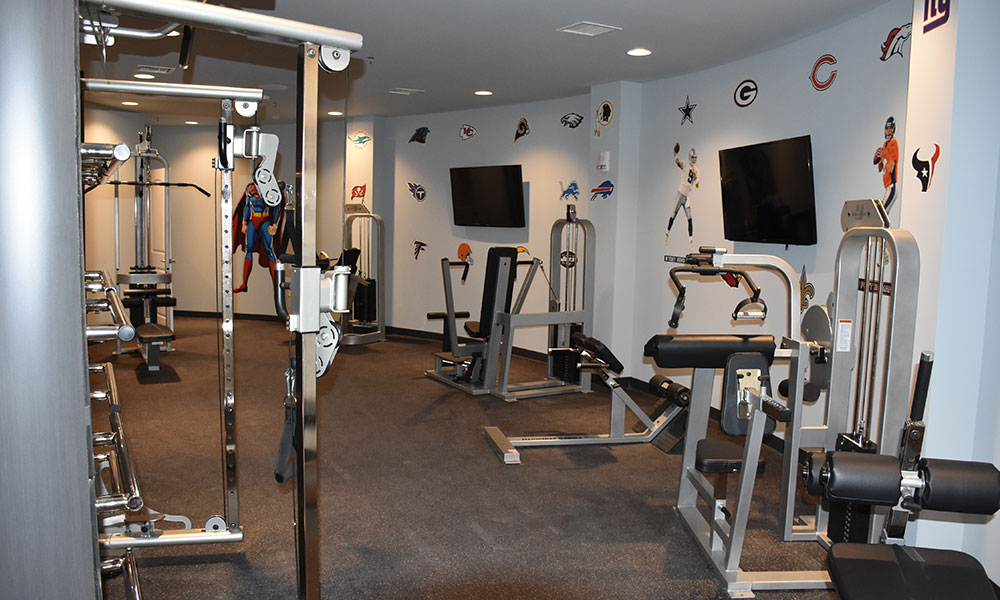 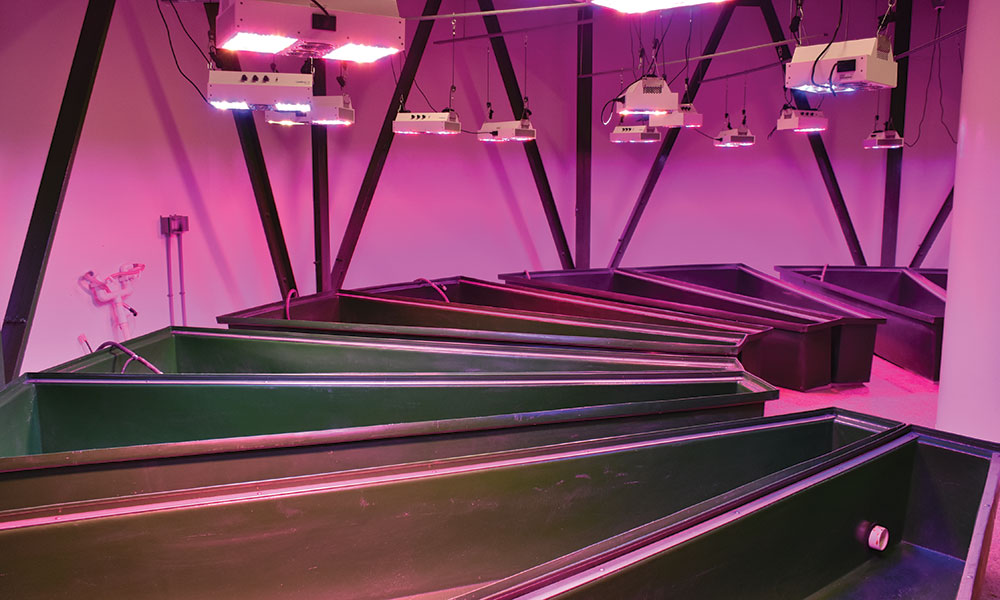 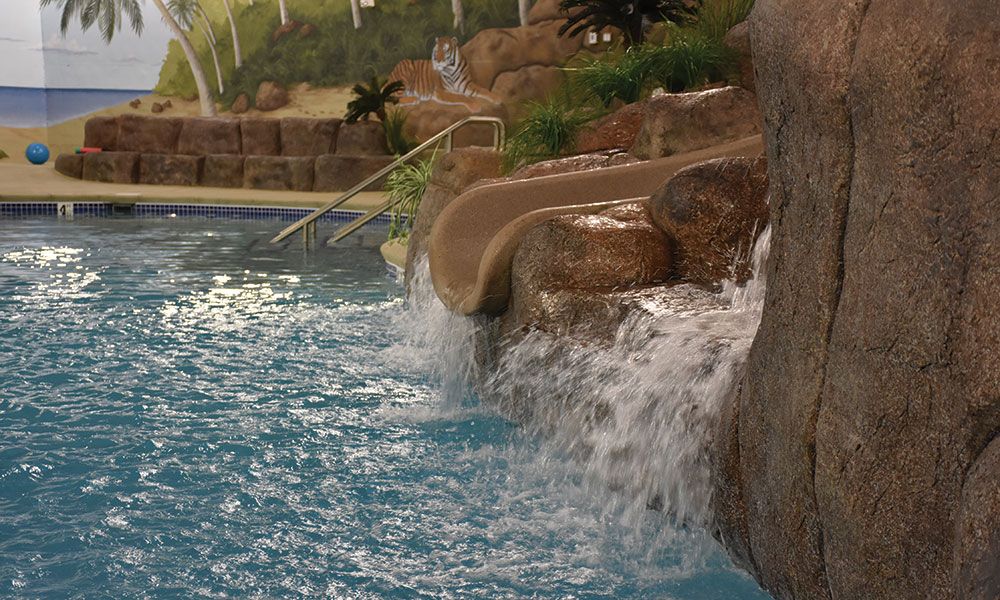 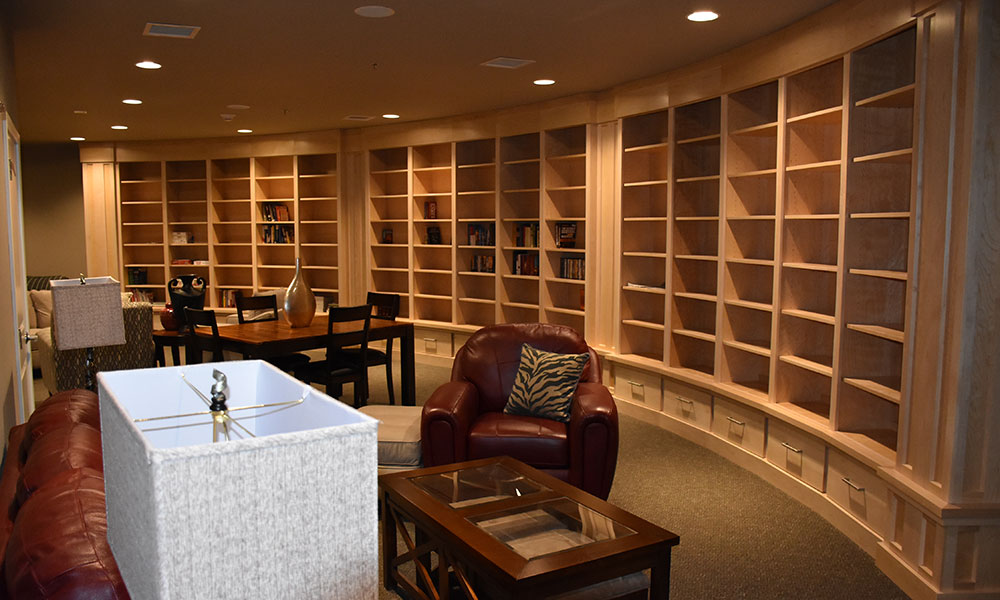 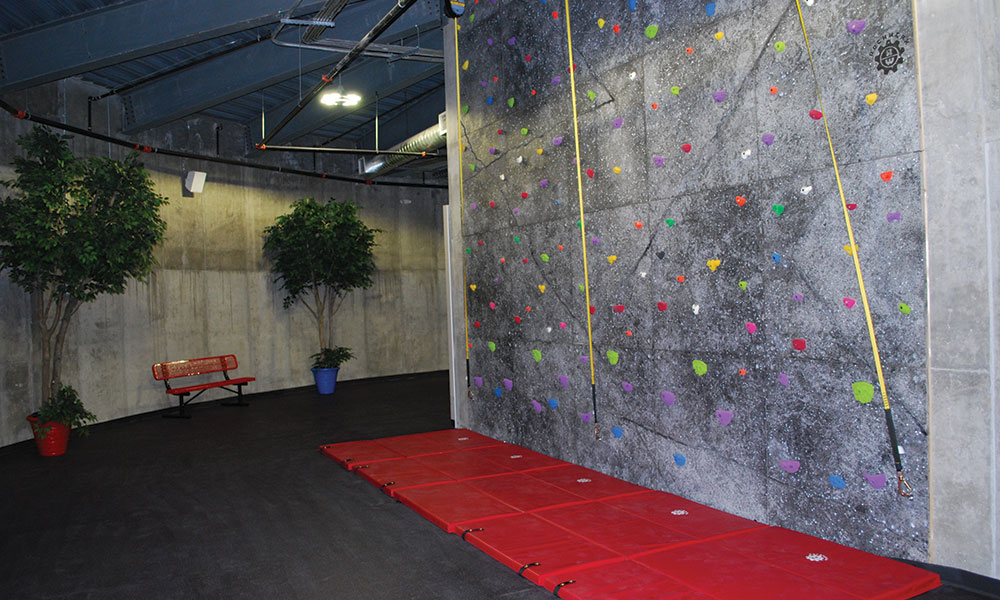 A kitchen inside one of the luxury, subterranean apartment. (Survival Condo Project)

Each of Larry Hall's missile silos comes with amenities, such as an arcade. (Survival Condo Project)

Gym rats won't have a problem sticking to their routine with this nuclear missile silo gym. (Survival Condo Project)

Larry Hall's tricked-out missile silos come with their own hydroponic food sources like these ones. (Survival Condo Project)

Residents will have access to an underground library in this nuclear missile silo. (Survival Condo Project)

Of late, I’ve been plowing through the biography of Morris “Moe” Berg—a historically significant figure I can almost guarantee you’ve never heard of. Berg was a third-string, bullpen catcher in the 1920s and ’30s for a number of different Major League Baseball teams, including the Washington Senators and Boston Red Sox, and became famous not so much for his savvy behind the plate but for his brain. He was a walking encyclopedia, having studied foreign languages at Princeton (he was reportedly fluent in a number of them, including French, and proficient in Sanskrit), and sported a law degree from Columbia (he moonlighted as a lawyer in the off-season). Soon after his baseball career fizzled and the Japanese bombed Pearl Harbor, Berg became a member of the Office of Strategic Services (OSS)—the progenitor to the Central Intelligence Agency—and spied for the US abroad during World War II. Unlike his place in baseball history, his OSS assignment was anything but trivial: He was tasked with figuring out whether the Nazis were capable of building an atomic bomb—and assassinating the scientist behind it if they were.

Obviously, we know how history played out: Hitler didn’t get the A-bomb—or make it out of the bunker, for that matter. But just imagine what would’ve happened had Berg missed a key telegram or been assassinated himself. Would I even be here writing this story right now? Would you be reading it? With current headlines reporting on unhinged, trigger-happy world leaders; virulent, vaccination-resistant strains of the flu; and catastrophic natural disasters mushrooming up every which way, it’s easy to be worried about what the future holds—and start thinking about exit strategies. And by that, I mean finding the nearest underground bunker in which to squirrel away your family and hide.

It might not surprise you, then, that there’s a growing number of ultra-wealthy individuals buying up prime plots of subterranean real estate all over the country—a number of which are within driving distance of Saratoga Springs. Select Sotheby’s International Realty’s Brian Dominic, a licensed real estate salesperson based in Lake Placid, recently told me that he’s been seeing a flurry of interest in decommissioned Atlas “F” nuclear missile silos. This specific type was built in the late 1950s and early ’60s, when Cold War tensions got to James-Bond-movie-script levels, and 72 presently dot the continental US, including a dozen in Upstate New York. If you’re trying to picture what a nuclear missile silo looks like, think about that thingamajig that holds grain on a farm, turn it upside down, ram it just under 200 feet into the ground and ring it in 9.5 feet of nuclear-resistant, epoxy-resin concrete. The above-ground “door,” if you can even call it that, is what Dominic describes as a cement “wedge.” That leads down two massive flights of stairs and around a few bends into the launch control center, a two-story room, 25 feet underground. That room sits off to the side of the main silo—which held the nuke-tipped missile—and is where some poor men had to sit for 12-hour shifts, day in and day out, waiting for the President’s “call” that never came (the upper floor was where the second team slept and ate, waiting to relieve the first one).

Dominic is quick to point out that his buyers haven’t been the type who believe the world is going to end anytime soon. “I’ve never had a legitimate buyer who was a doomsday prepper,” he says. “I’ve found that none of them are really serious.” For that reason, Dominic now charges a “showing fee” of $350 for potential buyers, which is reimbursable if that person ends up shelling out the cash for the silo. In all, Dominic says he’s officially listed three Atlas “F”s, along with two “pocket listings,” meaning the seller is high on finding a buyer but isn’t interested in publicizing the fact that he or she owns a Bond villain’s lair. Back in 2011, Dominic listed his first Atlas “F,” a property in Saranac that would eventually sport a luxury cabin and runway above the silo. Although Dominic didn’t close the deal, the silo eventually sold for $750,000. He did find a buyer, however, for an Atlas “F” in nearby Lewis—an hour and a half north of Saratoga—who paid slightly less than $600,000 for it. Its original owner had been an Australian architect and designer who wanted to turn the site into a (literal) underground dance club, but after his money dried up and investors bolted, he had to sell. Its current owner? A government contractor from the Department of Defense.

Most recently, Dominic listed an Atlas “F” for the steal-of-a-deal price of just $135,000, sitting on a 20.8-acre lot in Au Sable Forks, about two hours from Saratoga. Why so cheap compared to the Lewis property? Because it would likely require an estimated $750,000 to $1 million in renovations and repairs to get it into trick out–able form, according to Bruce Francisco, a builder and architectural designer who previously owned a missile silo with luxury upgrades in Upstate New York and is now working on a second in New Mexico. “Generally, the Upstate New York projects are filled with water,” says Francisco. “It’s kind of like having a wet basement.” Dominic concurs, not on the renovation price tag but on the basement comparison. “In the early ’60s, when the Air Force shut all these missile silos down, they also shut power off to the sump pumps,” he says. To that end, the only silo in Upstate New York without major leakage problems is the Lewis site. (The Au Sable Forks listing comes as is—with the main silo three-quarters filled with grimy water.)

Francisco also notes that if your New York silo were located within the boundaries of the Adirondack Park—a 9,375-square-mile tract of land—you would then have to deal with the policies and regulations of the state agency that oversees it (Francisco likens it to a “zoning commission”). Then there’s the Internal Revenue Service. Francisco says he paid $20,000 a year in taxes on his watery silo.

Of course, if you’re like me and enjoy the company of others, living in a giant subterranean tube sounds like a recipe for The Shining. For those who might want to host the occasional underground gala or cocktail hour, that’s where engineer and software developer Larry Hall comes into play. A New Yorker by birth—he’s originally from Corning and grew up in Elmira—Hall is the founder of Survival Condo, a pair of decommissioned Atlas “F” missile silos located in undisclosed locations in Kansas. The silos have been subdivided into 12 luxury apartment units each—including a 3,700-square-foot, two-level “penthouse” at the top of the silo’s dome cap, which starts at $4.5 million. (According to Hall, each silo “was designed to support a maximum of 75 people.” Not to mention withstand a nuclear blast.) Hall’s inverted skyscraper includes all of the amenities one might find in an upright Manhattan luxury condominium—as well as what you would need to survive, day in and day out, if the surface of the Earth were scorched and radioactive. There’s a wind turbine, diesel generators, hydroponic food sources and military grade security—you know, to battle off us plebes who might want “in.” Those families with furry friends need not worry about the coming apocalypse either, as the silo property also includes a dog park. Other “normal life” add-ons include a gym, rock climbing wall, indoor pool and arcade. And although silo-bound children might be cheering on the arrival of the four horsemen because that might mean no more school, they’ll be thoroughly disappointed to learn that Hall’s facility comes equipped with a classroom and library.

As noted above, if you’re not rolling in it, don’t bother trying to survive a doomsday scenario in the lap of luxury. “I would say our average buyer has more than a four-year college degree—the bulk of them are self-made millionaires—and almost all of them have children,” says Hall. One client referred to her unit as a “peace of mind policy,” as opposed to a life insurance policy, says Hall. The idea was that she would actually have to die for the latter to kick in, whereas the former was basically a new lease on life. Hall emphasizes that just because you’re living underground doesn’t mean that you’re giving up on your above-ground routine: Each multi-unit silo would be set up like an actual condo, so it would have a board that could decide on how to run things. “In the first silo, we lucked out: We had two doctors and a dentist that were owners,” says Hall. There were also nurses, EMTs, a former Chief of Police—hell, it sounded like a veritable Saratoga down there. (The first silo is completely sold out, by the way.)

If someone ever decides to nuke the US—or even just Upstate New York, for that matter—I’ll likely be atomized along with everybody else who can’t afford entry into a nuclear-blast-resistant bunker.But if you have the disposable income—and are willing to live out the rest of your days like a mole—I’d strongly suggest preordering a copy of The Catcher Was A Spy: The Mysterious Life Of Moe Berg by Nicholas Dawidoff. You’ll have a heck of a lot more time than the rest of us to finish it.

Mary Hirsch: The Little Told Story Of The Only Woman To Train A Travers Winner