Opera fans may remember that last year, due to concerns about performing indoors during the COVID-19 pandemic, Opera Saratoga took its 60th Anniversary Season on the road, performing al fresco at SPAC, Pitney Meadows and Columbia Pavilion in the Spa State Park. This year, as the Spa Little Theater is undergoing renovations, the
multi-venue model is back again—and now reaching a summer audience beyond the borders of Saratoga.

“Our education and community programs have always had a wide geographic footprint, serving people in seven different counties across Upstate New York,” says Lawrence Edelson, Artistic and General Director of Opera Saratoga. “The closure of our home theater got us thinking about how we could serve the region more robustly during the summer, and the answer was to bring our performances to more people in different cities, rather than always asking them to come to us.”

So, a brand-new Festival model emerged. Opera Saratoga will present staged performances of The Barber of Seville, a hilarious comic opera by Gioachino Rossini, at Proctors in Schenectady; Sky on Swings, a contemporary opera that explores life with Alzheimer’s Disease, at The Egg in Albany; and the Tony Award-winning musical Sweeney Todd, widely acknowledged as the late Stephen Sondheim’s masterpiece, at SPAC in Saratoga. Festival concerts including Rossini’s Petite Messe Solennelle at the Round Lake Auditorium, “Stars of Tomorrow” at The Charles R. Wood Theater in Glens Falls, “A Broadway Cabaret” at The Mansion of Saratoga in Rock City Falls, and “A Juneteenth Celebration” at Proctors GE Theatre will round out the 2022 season.

This Festival model also allowed Edelson to expertly mold this summer’s performance schedule to fit each of the various venues and audiences, flexing Opera Saratoga’s diverse repertoire. “For SPAC, it was clear after last summer’s performances of Man of La Mancha that there is a passionate audience for Broadway musicals during the summer,” he says of the decision to perform Sweeney Todd there. The Egg, Edelson continues, “is truly a unique venue, and it felt like an ideal place to present our contemporary offering this summer, Sky on Swings. It is an intimate space, but also has a sophisticated sound system that is allowing us to present the opera in a rather unique way, with ‘surround sound’, which we’ve never done before. The sound of memory is portrayed in this opera, and the production will be musically immersive in a rather spectacular way.”

There’s certainly much to be excited about leading into Opera Saratoga’s 2022 Festival, not the least of which is Broadway royalty and Albany native Carolee Carmello, who will be returning to the area to star as Mrs. Lovett in Sweeney Todd. But, when asked what he’s most excited about, Edelson says this: “To be bringing audiences back together in the theater—period. The past two years have been a real emotional roller coaster. While online performances can be very enjoyable, there is nothing like being at a live performance, and sharing that experience with others.” 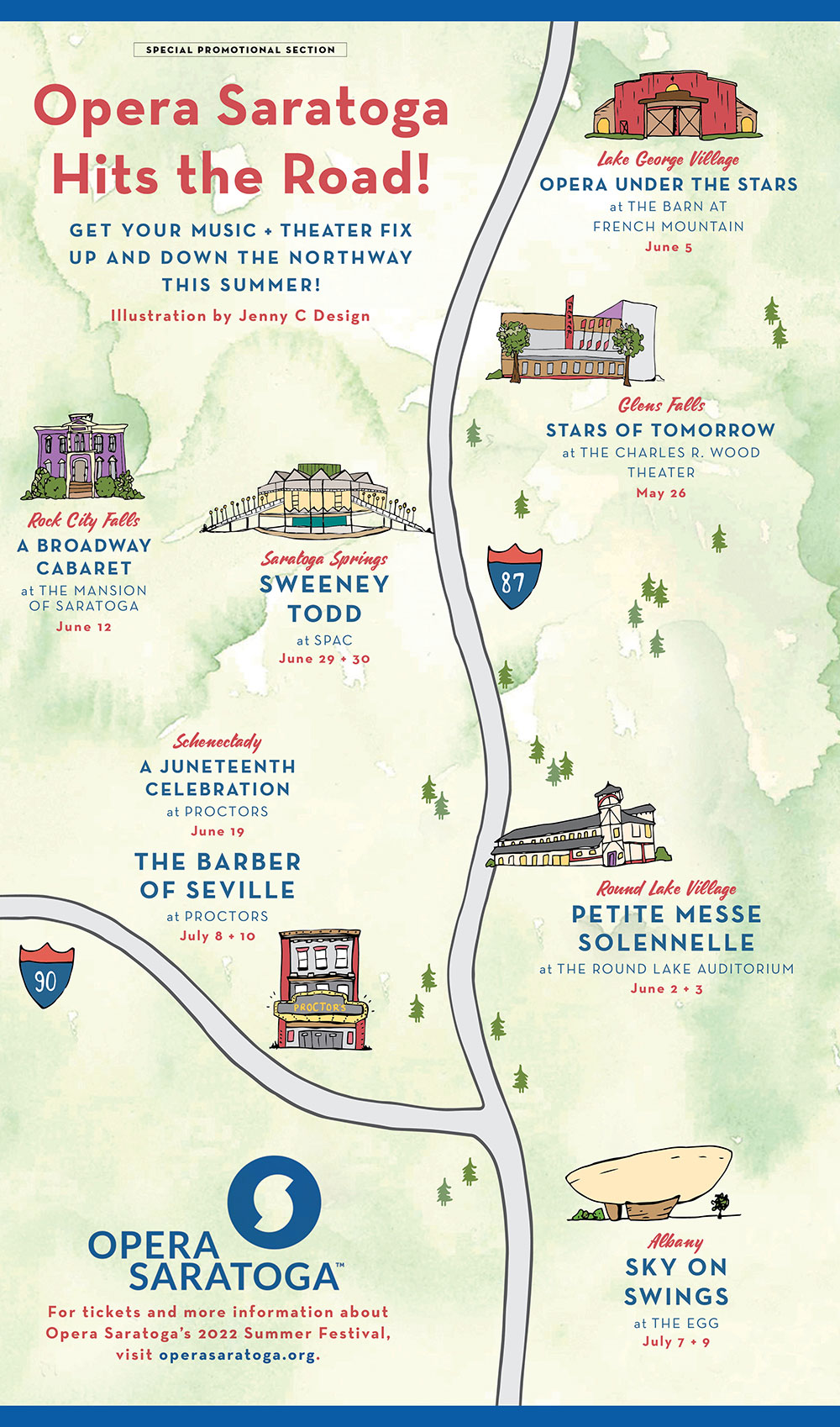