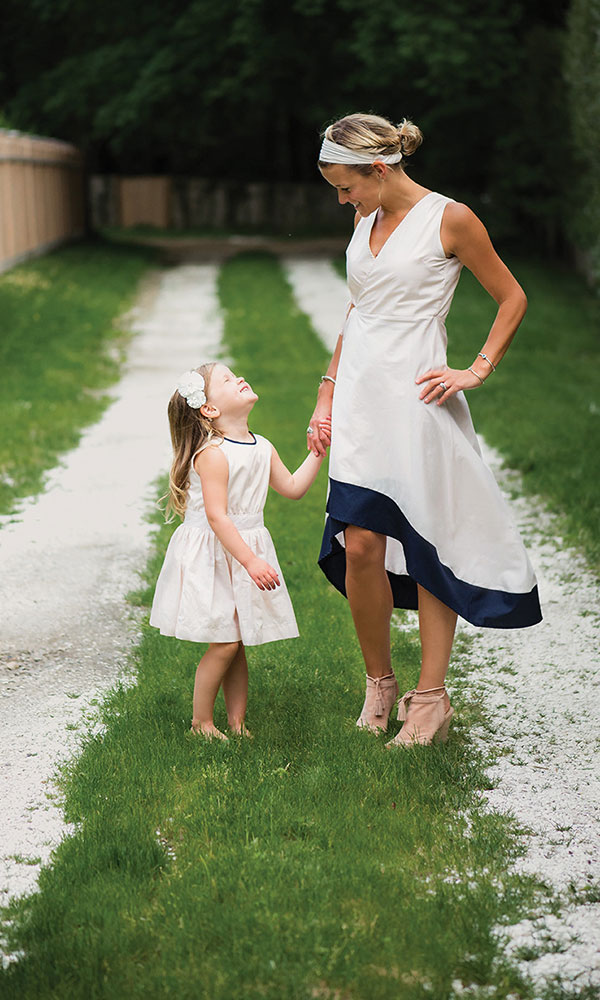 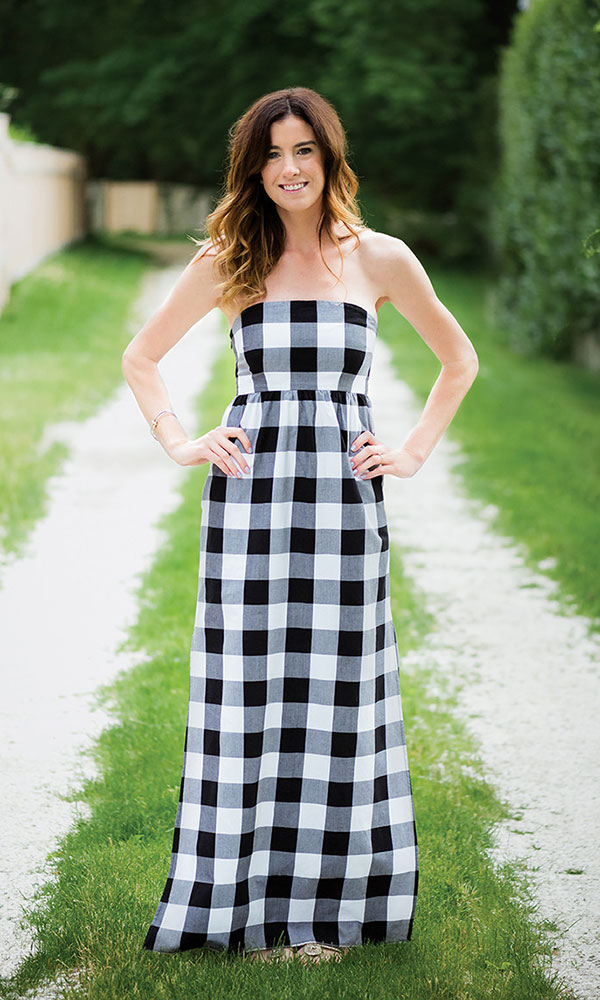 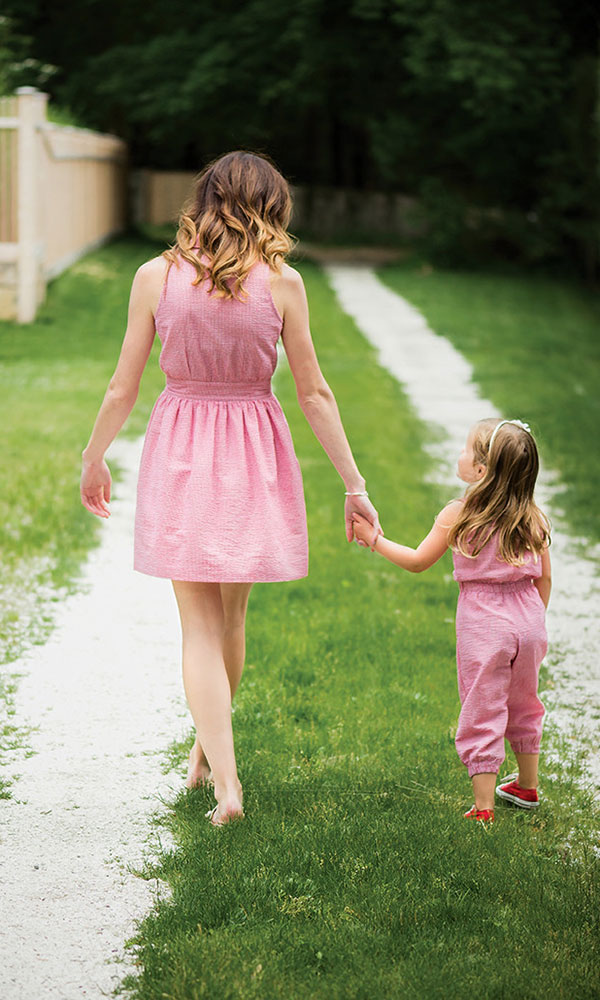 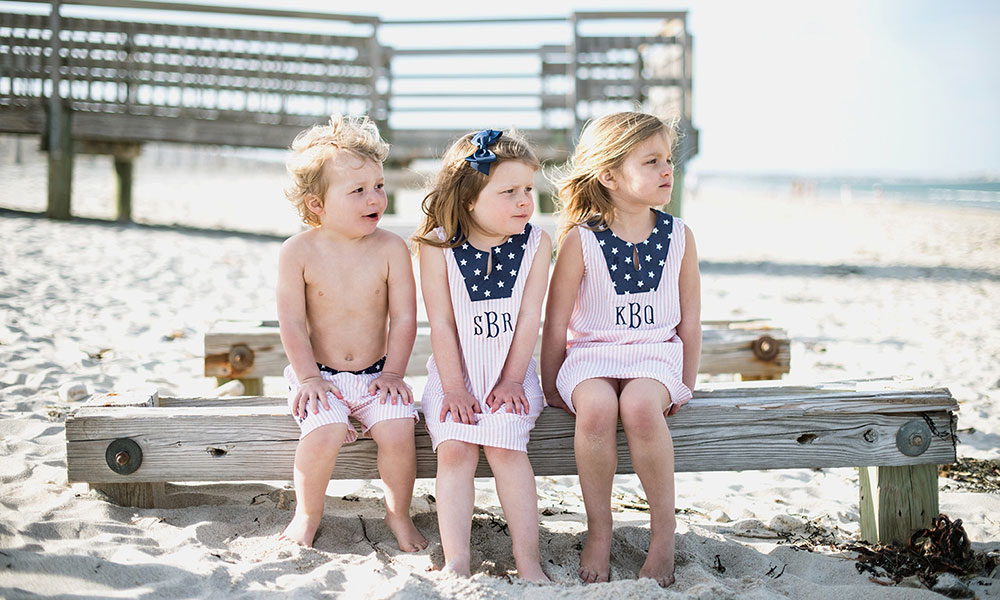 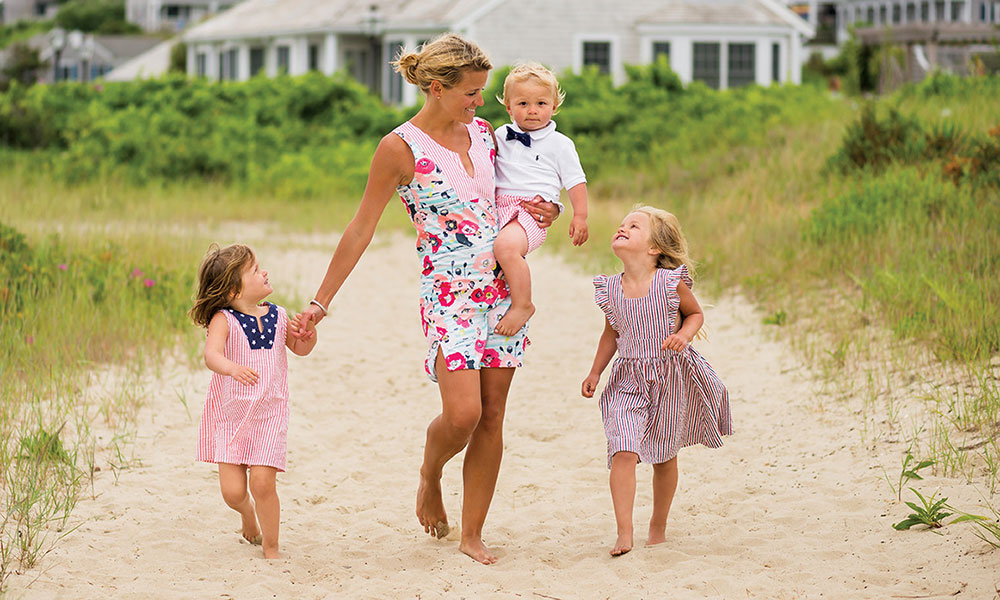 Now, she is looking to extend her brand with the new Katie Q collection for women.

The collection is partially inspired by Saratoga and features dresses called The Travers and The Paddock.

Katie Bowen’s three children Jack, Scarlet, and Kendal enjoy a day on the beach in their matching, monogrammed Petit Peony pieces, made especially for them by their mother.

Bowen and her three children dig their feet into the warm beach sand, laughing and looking radiant in their Petit Peony beach ensemble.

When Kate Bowen was growing up, her father always made a visit to the Saratoga Race Course a special day. That meant a reserved table in the clubhouse and fancy attire. He would look at the menu and say, “Anything for you, Katie Q,” she remembers.

Nostalgia for her childhood is often the starting point for designing the her Petit Peony clothing line. And her new fashionable line of clothing – Katie Q – celebrates that just as Saratoga’s summer season is upon us.

The collection is inspired from Bowen’s favorite places. “Saratoga is absolutely on the list…a dress in my collection is call ‘The Travers,’ another ‘The Paddock.'” She draws inspiration from the Fourth of July, birthday gatherings, lobster bakes, and summer afternoons selling lemonade – true Americana. “This experience to grow a business with my children has been so rewarding. My oldest daughter often accompanies me on business trips; she is my biggest fan and all three children are the inspiration for each piece of design.”

A mere three years ago, during a Vermont summer, Bowen taught herself to sew, choosing fabrics for her little girls she felt were a reflection of the innocence and magic of childhood. She had left the corporate world to spend time with her kids, and was expecting her third baby. By the time Bowen came home from the hospital with her newborn, she had seven orders on Etsy waiting to be filled.

Petit Peony had made its debut, and two-and-a-half years later the adorable clothing was being sold in over 100 boutiques across the country, even making its way into Japan. In a single year, its online sales more than tripled, due to a strong social media presence, glowing press, effective boutique partnerships and a great deal of elbow grease.

Bowen was completely taken aback when Petit Peony attracted the eye of influential women like Ivanka Trump and Marissa Mayer, the CEO of Yahoo, whom she considers an inspiration. Ivanka Trump choose Petit Peony to be featured on her Women Who Work campaign; she then asked Bowen to design the clothing for her children to wear to the presidential Inauguration. Bowen’s husband was driving the family home from a ski vacation when Bowen received the surreal request. She screamed when she read the email, nearly causing her husband to drive off the road.

“It was an opportunity I’ve never even dreamt of, because I’m an untrained designer who started sewing for my daughters when I couldn’t find the clothing I was looking for! Designing high-end, custom pieces for the inauguration was wild. It was a whirlwind, and I still can’t believe we pulled it off!  When I saw my designs…my stomach dropped and an incredible sense relief and a feeling of accomplishment came over me. I think it was the first time I breathed deeply in three weeks!”

All three of Ivanka’s children wore Petit Peony to the National Prayer Service. “…Just days before, I received a call that a button popped off the ivory coat for Arabella! I was so upset. I quickly overnighted extra buttons to DC, but due to increased security the family never received the box. I thought for sure that was the end of the ivory outfit. I later found out that Arabella’s covered button was super-glued back together and she wore it proudly. I am a little embarrassed about the faulty button, but I think it says so much about Ivanka and her support of women. Designing her children’s clothing was not a political decision for me. It was a business opportunity and an incredible one at that. My name was in the same headline as Oscar De La Renta. It was a surreal experience – one I would have never expected when I started sewing in my Vermont attic three years ago.”

Katie Q is a collaboration with her good friend and designer, Louisa Smith, of Grapevine Interiors. They share a love for textiles, travel and design – all elements incorporated into Katie Q, which will share coordinating pieces with Petit Peony.  Bowen sold out of women’s tunic dresses in one day, having created a line for women that is unique, comfortable and flattering. Bowen’s also incorporating a made-to-order component for an accessible price point as she believes women have a hard time finding something they love that fits perfectly.

Katie lives with her husband, Ryan, and their three children, Kendal, Scarlett and Jack, in Duxbury, Massachusetts, where they also opened their first brick-and-mortar boutique and office.

Petit Peony has been featured in British Vogue, Glamour, Town & Country, as well as Women’s Wear Daily and Yahoo Style.

The Ginley Girls: A Quartet Of Singing Sisters