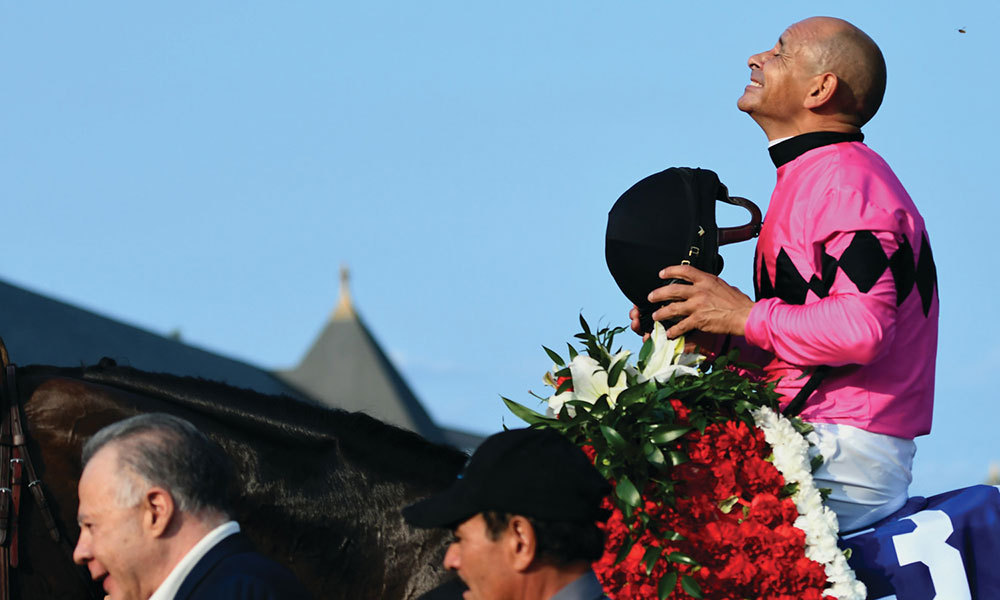 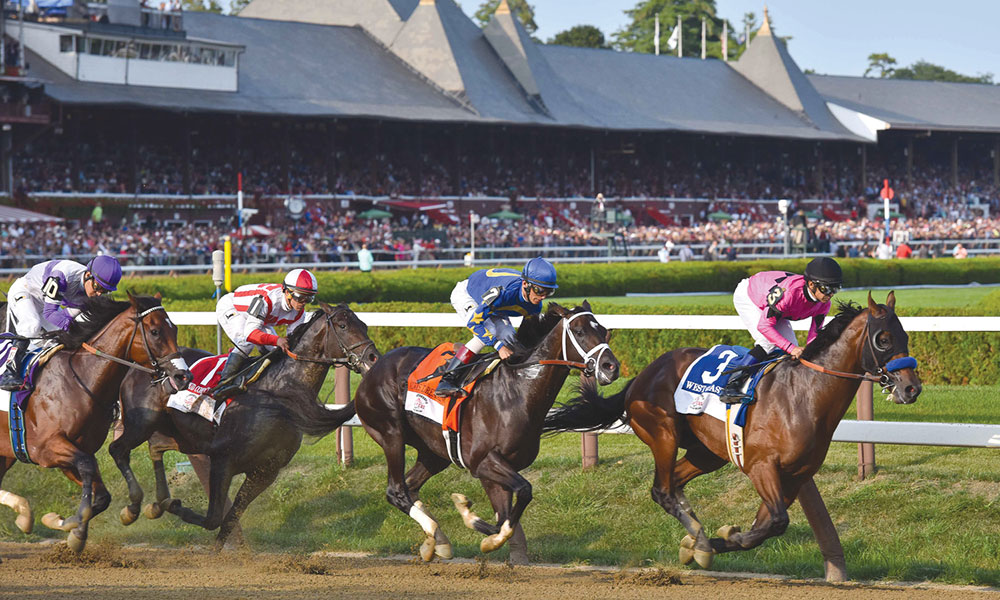 West Coast, the Bob Baffert-trained colt, seized the lead coming out of the gate, and jockey Mike Smith never gave up that position as he and Baffert win their second Travers Stakes in a row. (Mike Kane) 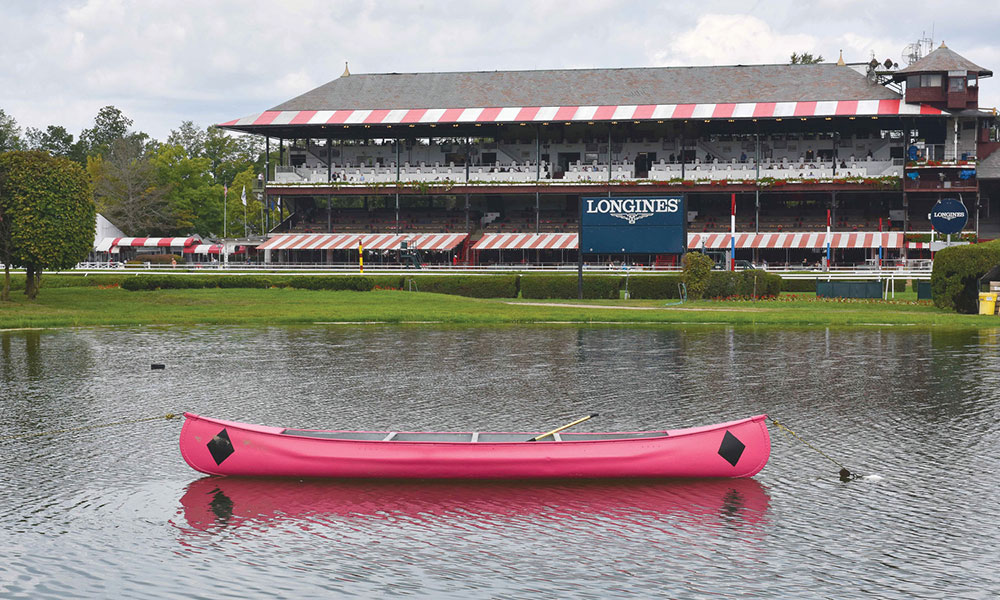 The Travers canoe in the infield will be painted in the racing colors of this year's winner. (Mike Kane) 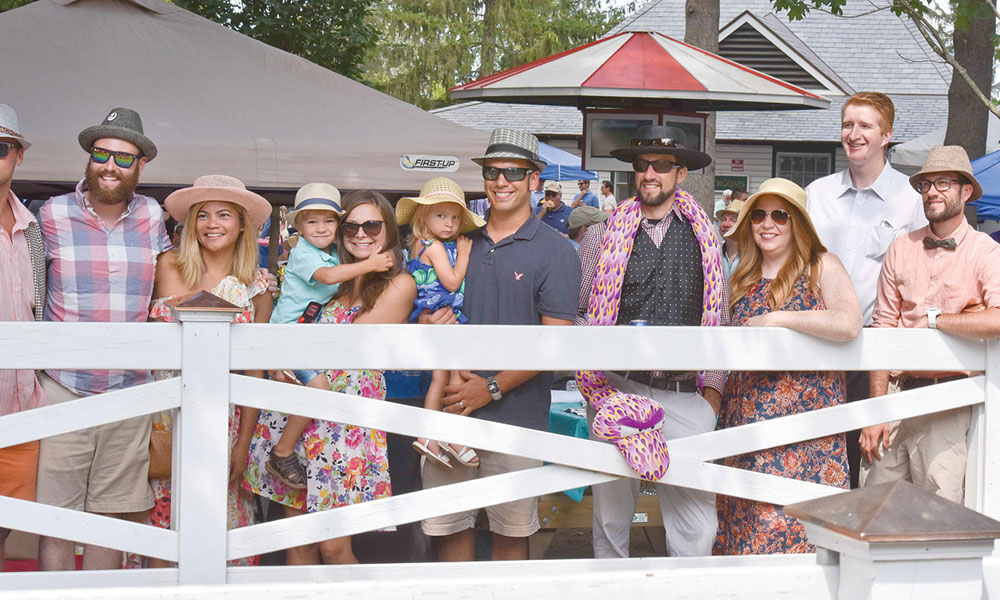 Hats are de rigueur for fans of all ages who gathered by the fence at the horse path in the backyard. (Mike Kane) 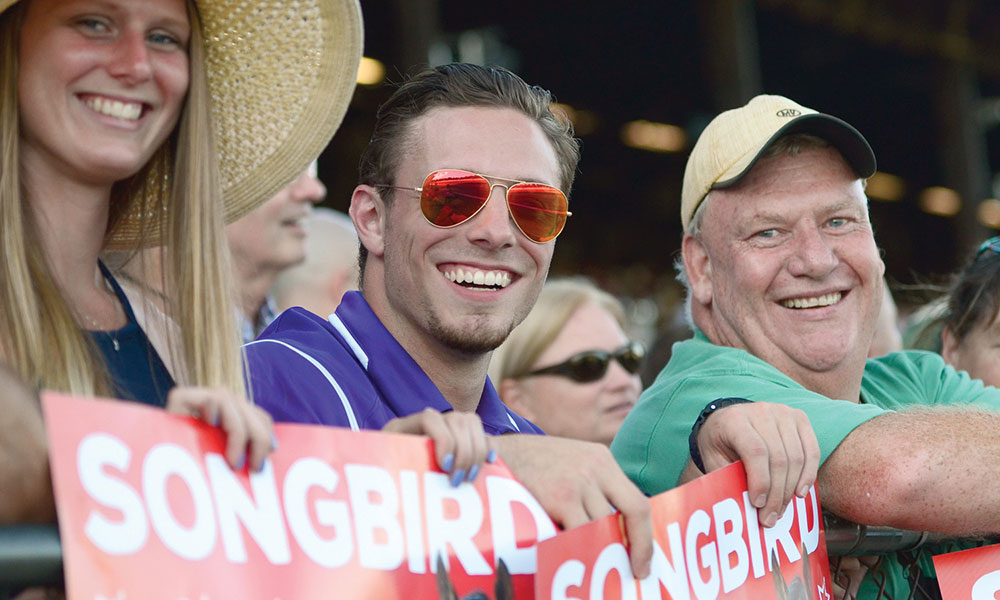 Fans of Songbird, the standout filly of 2016, sing her praises before her loss at the wire to Forever Unbridled in the Personal Ensign. A leg injury caused Songbird to retire a few days after the race. (Cathleen Duffy) 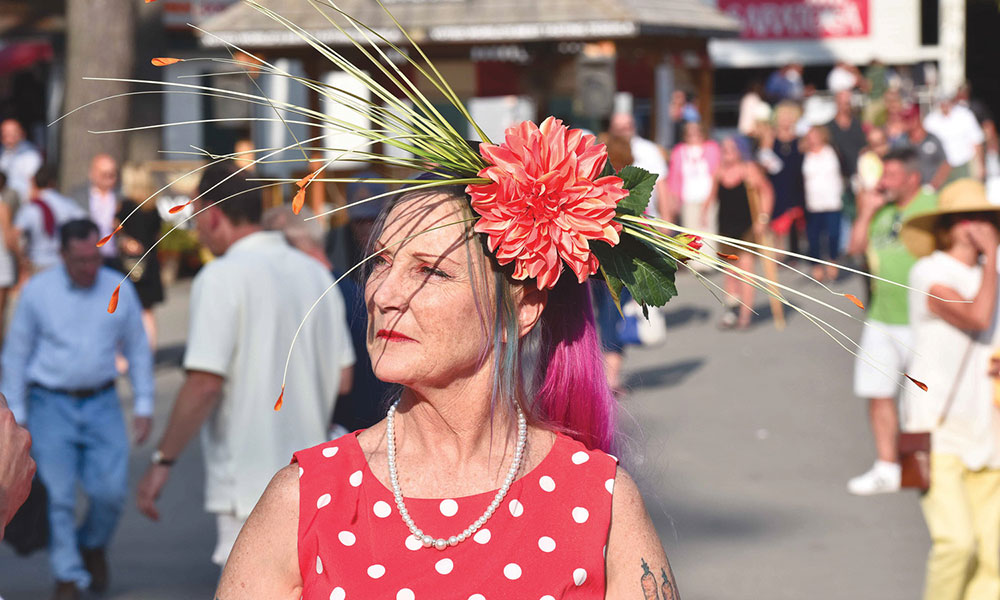 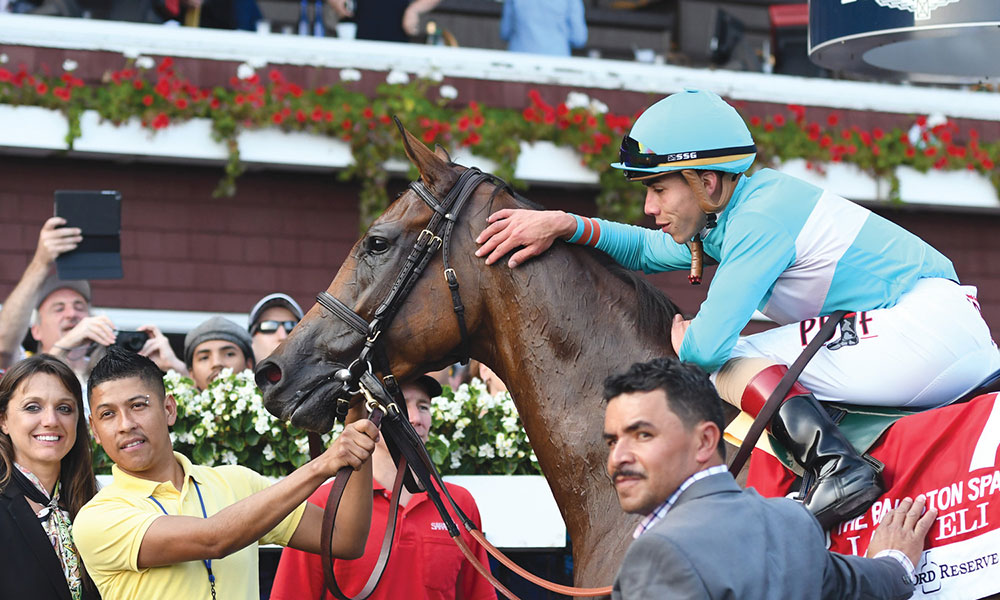 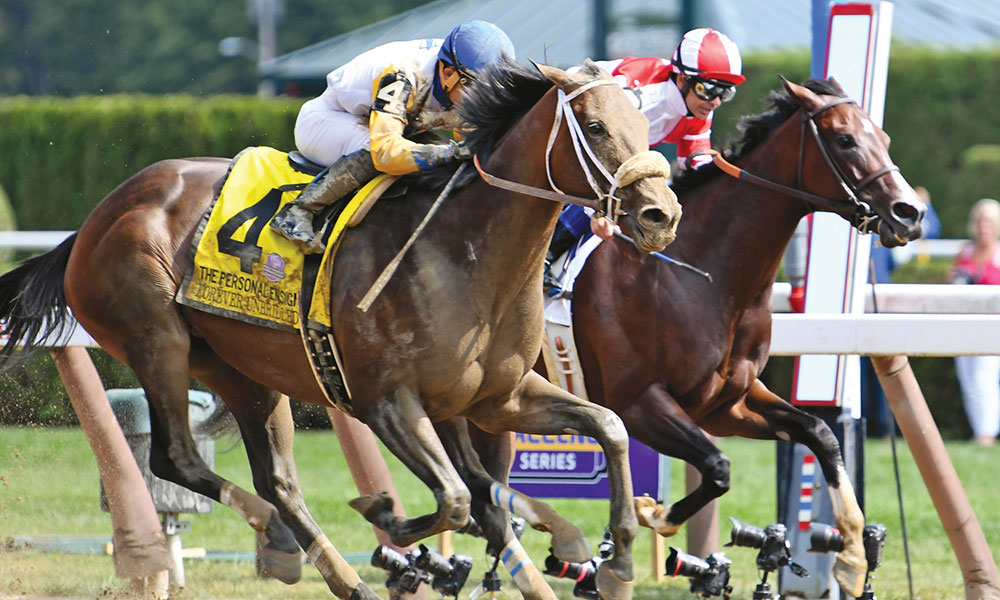 Forever Unbridled (4) wins by a nose against champion Songbird in the 70th running of the Personal Ensign, a Breeders’ Cup ‘Win and You’re In’ race for the Distaff division. (Cathleen Duffy)

Throughout this summer’s Saratoga racing season, Yogi Berra’s famous line “It’s like déjà vu all over again” fit and fit and fit again. In many respects, most of them positive, 2017 was much like 2016.

So was jockey Mike Smith.

Like they do every year, Chad Brown and Todd Pletcher battled for the trainer’s title, while distancing themselves from the competition. Pletcher came out on top, earning his 13th crown by a single winner over Brown, who earned his first championship a year ago.

Ditto in the jockey standings, where the Ortiz brothers, Jose and Irad, led the way, well ahead of the others in a talented colony that included Hall of Famers John Velazquez and Javier Castellano. Jose was victorious, claiming his second straight Angelo Cordero, Jr. title with 58 wins.

And unsurprisingly, Owner Michael Dubb prevailed for the fourth straight year as the meet’s leading owner.

The number of fatal breakdowns of horses in training and competition, a sobering statistic at America’s most important race meet, was 15 — five more than last year, according to the NYS Gaming Commission database.

And the weather was very, very good again — warm and dry and pleasant most days — which is critical to a successful season. Racing is an outdoor sport, after all, and a large percentage of Saratoga’s fans park themselves in the open-air setting of the popular backyard on picnic tables and folding chairs. It’s all about the weather. Every year.

As a result, business, the betting handle, set a record for the second time in the past three years. On Travers Day, Aug. 26, the biggest, most important program of the meet, the total handle of $47,870,987 was a five percent increase over 2016 and the second-highest total in Travers Day history. Only the 2015 Travers, which featured Triple Crown winner American Pharoah, tops this summer’s figure. And the total handle for the meet was a record-breaking $676,709,490, 4.4 percent higher than the previous record set in 2015.

Smith and Baffert made history together with West Coast’s surprising victory in the Travers. It was the second straight year the Hall of Famers collaborated on a Travers score — they partnered with Arrogate in 2016 — and they became the first trainer-jockey combo to win the 148-year-old race in consecutive years.

The first showdown in 35 years between the winners of the three Triple Crown races was won rather easily by a horse that did not run in the series. That outcome followed Saratoga historic form, too. In 1918, Sun Briar did not run in the Kentucky Derby, Preakness or Belmont Stakes, but conquered the winners of those races in the Travers. In 1982, it was Runaway Groom’s turn to beat the Triple Crown race winners. West Coast earned a place in Saratoga history and made himself a contender for the 3-year-old male champion.

In 2016, the Travers was the coming-out party for Arrogate, a lightly raced colt who had not competed in the Triple Crown series. He won by 13 1/2 lengths and broke the 37-year-old track record for 1 1/4 miles. From the Travers springboard, Arrogate won the $6 million Breeders’ Cup Classic, the inaugural running of the $12 million Pegasus World Cup and the $10 million Dubai World Cup.

West Coast had much in common with Arrogate. He did not run as a 2-year-old and was deemed not ready for the Triple Crown races. Baffert took his time with Gary and Mary West’s colt, and he arrived at the Travers with better credentials than Arrogate: a pair of wins in small stakes. At 6-1, he received more respect from bettors than Arrogate, who was 11-1 in the wagering. Baffert stayed home in California and watched on TV as Smith surprised handicappers and other horsemen when he unexpectedly took West Coast to the lead out of the gate and stayed in front the rest of the way. Always ready with a quip, Baffert’s reaction in a post-race telephone conference call showed his understanding of a Saratoga tradition.

“I’m just fortunate we got control of the canoe one more year,” he said.

Since the early 1960s, the colors of the owner of the Travers winner have been painted on the canoe that floats in the infield pond. Gary and Mary West’s florescent pink with black diamonds vessel will occupy the place of honor until the 2018 Travers.

Baffert and Smith developed their strategy as the racing day developed. At first, Baffert thought the track was playing against speed and favoring closers. When Smith piloted Baffert’s champion sprinter Drefong to a front-running victory in the seven-furlong Forego, Baffert gave Smith permission to try to steal the race on the front end. He won by 3 1/4 lengths over Gunnevera. Irap was another 2 1/4 lengths back in third.

“I got a text from Bob earlier, about 20 minutes before we went out (to the paddock), and he told me just to ride however I wanted, and he really made the ‘however’ pretty big,” Smith said. “So that made me feel like, ‘OK, I got the green light to maybe get a little aggressive.’ I didn’t think there was much pace in there. I’m sure we all thought that. And I thought, ‘Man, if I can catch a good jump, I’m going to take advantage of it.’”

“Well, this is a race that we watched for the probably 40 years we’ve been in horse racing, and obviously it’s always one we’d love to have won, and we finally won one,” Gary West said. “To be honest with you, the race did not unfold the way that I thought it would. I fully expected us to be five or six lengths behind going down the backstretch.

“And Mike came up to me about 15 minutes before the race, and he said, ‘You know, there’s not a lot of speed in there. If they give me an easy lead, I’m going to take it.’ I said, ‘Mike, you take whatever they’ll give you and go on with it,’ and it worked out real well. He rode a hell of a race is all I can tell you.”

In 2016, Smith compiled a 4-1-1 record and his horses earned $1,830,167 in eight starts at Saratoga. He won the Coaching Club American Oaks and the Alabama with Songbird, the King’s Bishop with Drefong and the Travers with Arrogate. Baffert’s record was 2-1-1 and earnings of $1,184,167 from five starts. His winners were Drefong and Arrogate.

This summer, Baffert and Smith were every bit as effective with their forays from Southern California. With a slightly different lineup of horses, they each had a 3-1-1 record from five starts and earned over $1.3 million in purses. They won at a 60 percent clip and their horses finished in the top three — typically referred to as “in the money” — at a perfect 100 percent.

While the Travers always draws the most attention as Saratoga’s oldest race and its signature event, the 40-day meet is a showcase for many memorable performances.

Here’s a shocker: Baffert and Smith were involved in one of the most significant moments outside of the Travers — the Coaching Club American Oaks. Riding Abel Tasman, winner of the Kentucky Oaks, and Acorn, both Grade 1 races, Smith made a decisive tactical decision that helped secure a victory by a head over Elate. Seeing Elate and jockey Jose Ortiz coming up the rail in the stretch, Smith moved Abel Tasman from the four-path toward the inside in a blatant attempt to intimidate the looming rival. Separated by inches and perhaps touching at times, they raced together to the wire. Ortiz claimed foul, but after a steward’s inquiry the result stood.

“It’s just good, old-fashioned race riding,” Smith said. “By no means did I put her in any harm. My filly really waits. Once she was in there, she was engaged. I made sure that I didn’t touch him (Ortiz). I made it tight, but there’s no rules that say you can’t make it tight. They make it tight on me all the time and I’m too old for that. It’s a questionable move that I would have questioned myself if I got beat. But I didn’t, so I liked it.”

With Abel Tasman back in California in Baffert’s barn, Elate prevailed in the Alabama on Aug. 19 by 5 1/2 lengths for owners Claiborne Farm and Adele Dilschneider and trainer Bill Mott.

Popular Lady Eli, trained by Brown, the native of Mechanicville, won two stakes at the meet, the Grade 1 Diana on July 22 and the Grade 2 Ballston Spa, and provoked an emotional response from fans. Lady Eli won her debut at Saratoga in 2014 and became a star with her victory in the Breeders’ Cup Juvenile Fillies Turf that year. She won all three of her starts in 2015 before stepping on a nail, an injury that led to a life-threatening bout with the hoof disease laminitis.

Lady Eli missed approximately 13 months and finished second in her comeback race, the 2016 Ballston Spa. This year, Brown had her pointed to the Diana on July 22, which she won on grit by a head. Changing plans, Brown opted to enter her in the Ballston Spa and she turned in another determined victory.

On the final day of the season, 82-year-old trainer D. Wayne Lukas won the Hopeful for the eighth time in his career with Sporting Chance.

In 2016, the standout horse of the meet was Songbird, who shipped in from California to sweep the Coaching Club American Oaks and the Alabama. Songbird returned this year, but was caught near the wire by Forever Unbridled and finished second in the Personal Ensign. A few days later, she was retired after she was found to have leg injuries.

Taking Songbird’s place on the throne this summer was Gun Runner, who was terrific winning the Whitney by 5 1/4 lengths and even better taking the Woodward by 10 1/4 lengths. He was first horse to win both races since Lawyer Ron in 2007. Gun Runner arrived in Saratoga as one of the leading older horses in the country, but after his two wins and Arrogate’s two losses at Del Mar, he left the Spa as the favorite for the Breeders’ Cup Classic.

In the Classic, Gun Runner will likely have to contend with Arrogate, West Coast and some other toughies from Baffert’s deep and talented stable. Though he didn’t make the trip east himself this summer, Baffert had a major role in the Saratoga season. So did Smith. Again.

Award-winning journalist Mike Kane has been writing about Saratoga racing since the 1970s and is a contributing editor at Saratoga Living.