Did we see you tonight? saratoga living set out to find out what really happens in Downtown Saratoga Springs after dark. Photographer Kyle Adams documented what he saw at a number of local favorites, including Putnam Place, 9 Maple Ave., Gaffney’s, Sinclair Saratoga, The Ice House and more. We weren’t quite ready for the results. Prepare yourselves.

9:22pm
The Wesley Foundation Gala at the Saratoga Golf & Polo Club
Red light soaks the interior of a party tent where guests in Spanish-themed cocktail attire dance, eat, socialize and drink. On the checkered dancefloor in the center of the tent, a young couple performs a tango routine. Outside, men smoke cigars in small groups, and a silent auction is under way. I’ll run into some of the same couples later that night, as they continue the party at The Adelphi Hotel and in the bars on Caroline Street.

10:36pm
The Adelphi Hotel
The waitstaff closes down the dining room as the bar slowly fills up on a Saturday night. A neatly dressed bartender mixes me a Sting Like a Bee and sets it on fire as he discusses the rhythms of Saratoga nightlife. In the lobby, parents of Skidmore College students—from Buenos Aires, Miami, Caracas—celebrate graduation weekend.

1:03am
Corner of Phila & Broadway
As the sun sets, Broadway’s packed with people finishing dinner on patios and strolling past the storefronts. By midnight, it’s nearly vacant, save for people on their way back to their cars, couples finding a secluded place to talk or fight and the busker playing acoustic Pink Floyd covers on the corner of Broadway and Caroline.

1:15am
The Newberry Music Hall
The Newberry is one of the few spots of activity on Broadway at this time of night.

9:07pm
Parking garage at Putnam & Spring Streets
It’s the beginning of the night, and Aidan Gregory, Sina Kum and their friends have just arrived in Downtown Saratoga. They hang out in the car for a few minutes before heading out.

11:15pm
Sinclair Saratoga
The hot spot’s signature neon sign throws fuchsia light over the crowds at the bar and on the dancefloor.

10:55pm
The Ice House
I’m on the trail of Tony Weils (pronounced “wails”), the accurately named singer, when I come across Jon Zinter and Elaina Rando at The Ice House. It’s a warm night, so everyone’s enjoying the fresh air. I run into Zinter again later, around 2am, on the roof of The Saratoga City Tavern with a different group of people.

12:25am
Gaffney’s
It’s been a cold spring, so there’s a particular zeal among the crowds finally able to enjoy a warm night on Caroline Street. It’s also wedding season. While I shoot photos of this wedding party, they tell me there’s another, and possibly a third, already inside the bar.

12:01am
Putnam Place
I show up hoping to catch the tail end of a show by Let’s Be Leonard; it turns out they’ve just started. When I walk in, the band is nearly motionless, in the middle of a glacial jam led by the saxophonist.

12:20am
Sinclair Saratoga
Sinclair hooks me with its fuchsia glow, courtesy of a neon sign on one wall that reads, “Together is a beautiful place to be.” There’s an arcade in the back room and a beer garden, both low-key alternatives to the dancefloor, which, while I was there, was stormed by a bachelorette party.

12:42am
Putnam Place
Steve Callander, who calls himself a CeeLo Green look-a-like, works the door at Putnam Place. He’s a popular guy—every time I raise the camera to shoot, someone jumps in the photo with him.

10:15pm
Hamlet & Ghost
Cook Bryan Nitsche serves up some of the last dishes before closing the kitchen for the night. When I ask the owner for the name of the cook with the cleaver tattoo, he says, “Which one?”

10:04pm
Hamlet & Ghost
Hamlet & Ghost is packed with couples and groups finishing dinner and transitioning to drinks. George and Tea Varghese enjoy cocktails in front of the picture window with a broad view of the crowds arriving on Caroline Street.

9:35pm
Putnam Place
Melanie Ryder pours a drink for a customer while The Melting Nomads play an opening set for Melvin Seals & Terrapin Flyer. It’s early, and the place is only just starting to fill up. Ryder and the other bartenders have time to talk with the customers, many of them apparently friends and regulars.

After Midnight
Corner of Caroline and Putnam
I spend some time here watching people come and go from the bars on Caroline Street. Early in the night, it’s mostly couples and groups in good spirits. After midnight, things get drunker, messier and more dramatic, with the occasional Saratoga police intervention.

11:09pm
9 Maple Avenue
This alley and its various frames make for a good place to hang out and wait for a photo. Apparently, I’m not the only one who thinks so. The bouncer, who chats with me for a while, says it’s often used for photo and video shoots. 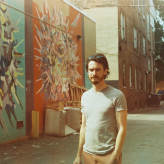 Kyle Adams is a documentary photographer based in Albany.