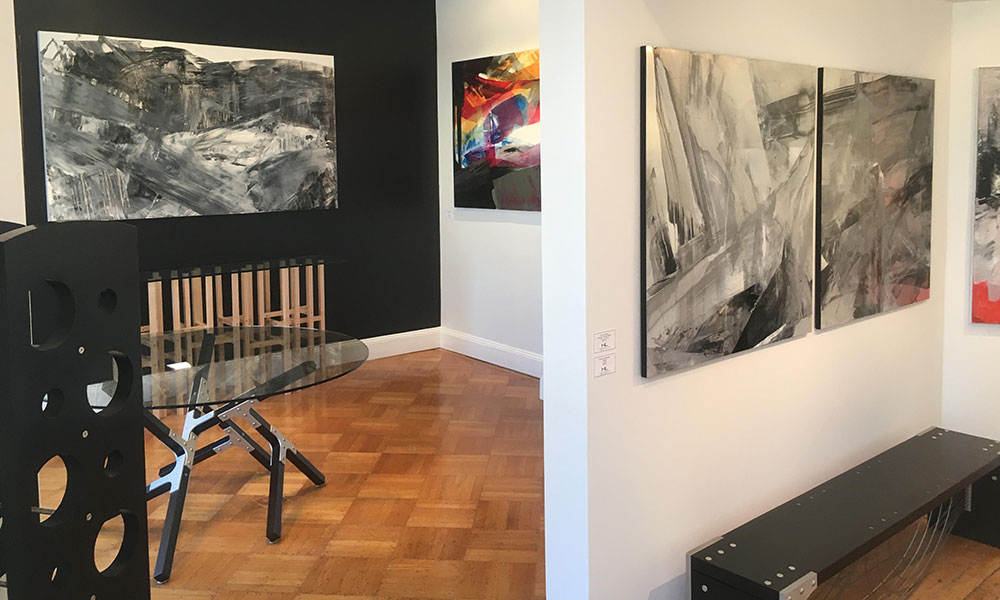 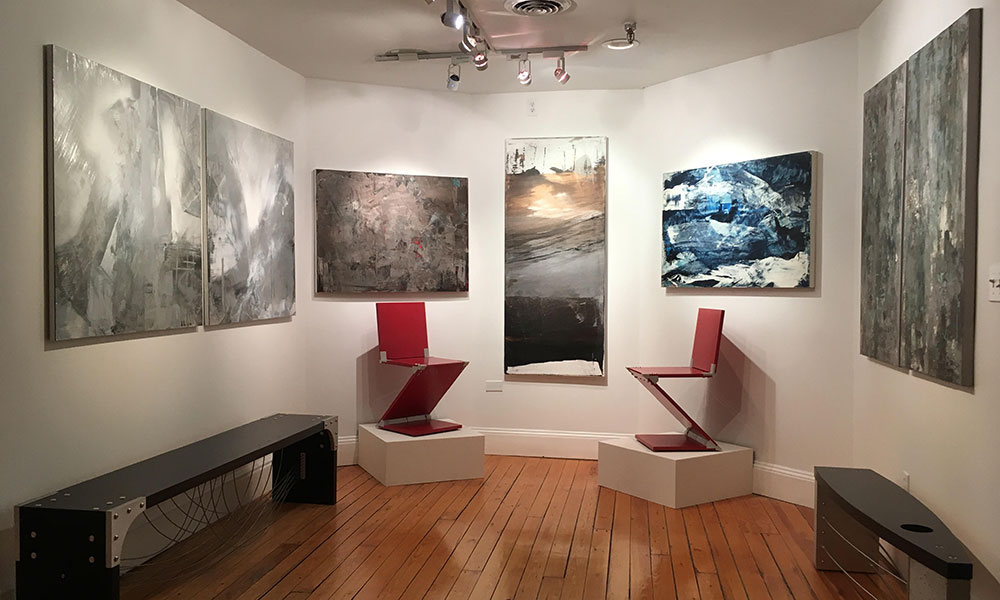 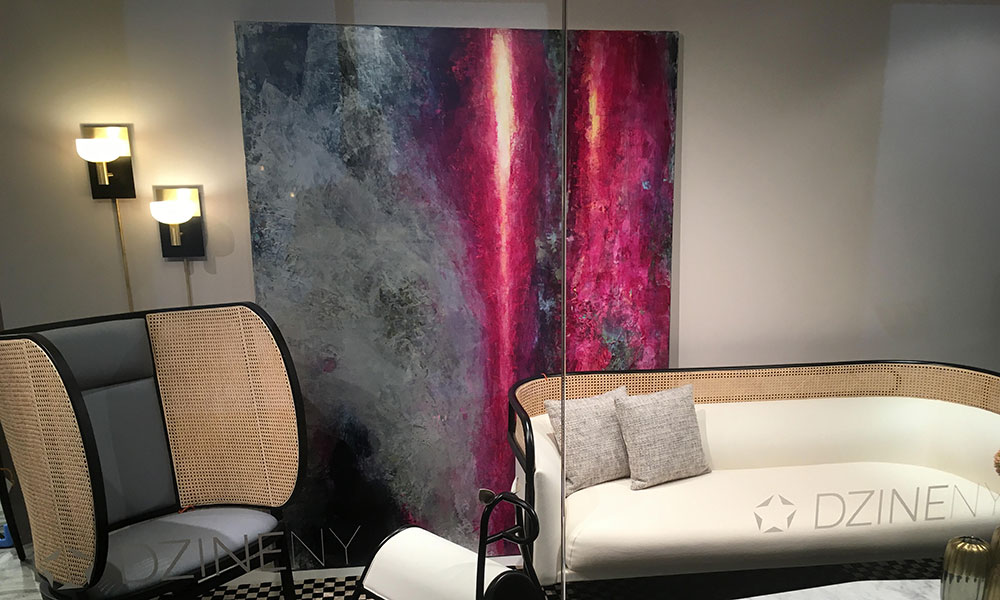 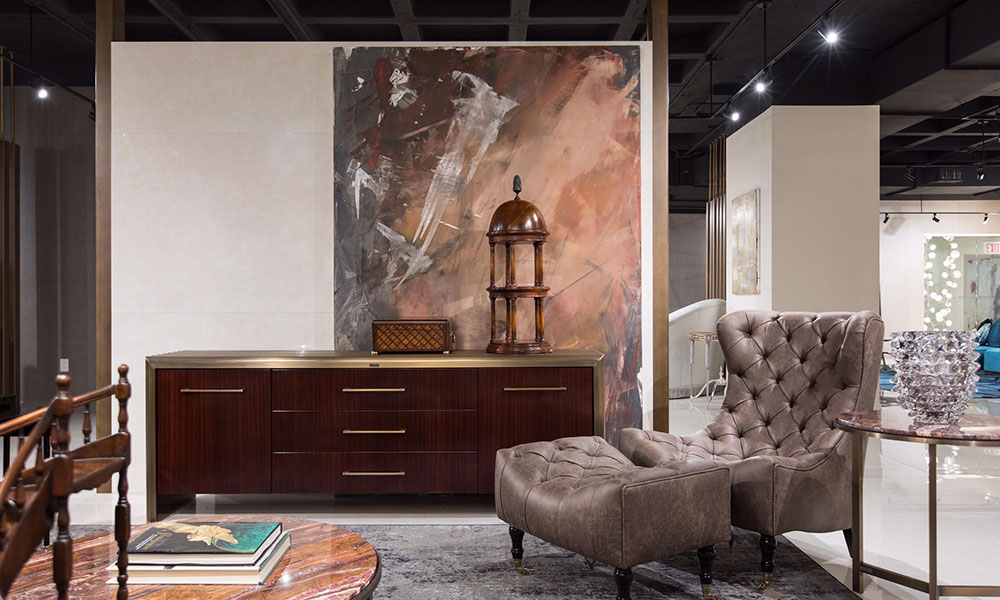 Some of Zack Lobdell and Peter Harrison's works on display in their Harrison Lobdell Gallery in Saratoga Springs.

Could Saratoga Springs be on the verge of a major contemporary art movement? At least one local artist hopes so. I met artist Zack Lobdell, who was raised on Circular Street in Saratoga and graduated from Saratoga Springs High School, in his studio at his new storefront, the Harrison Lobdell Gallery, at 2 Franklin Square just a couple of blocks from Downtown. The artwork in the gallery that Lobdell shares with modern furniture designer Peter Harrison is nothing short of hypnotic, subtly seducing the viewer’s gaze into a tidal pool of abstract motions, textures and surprising colors. In Lobdell’s paintings, there are a lot of nebulous references to landscapes, natural forms and flowing organic movements. It’s like looking for animal shapes in the afternoon clouds; familiar figures emerge, dissolve, disappear and then reemerge. Lobdell explains: “With realism, I’ve always felt that once you’ve established the skills to represent things, it’s sort of easy in a way because you know what your end product is supposed to look like. Not that the technical aspect of it is easy, but the story is easy. But with this, this is a kind of a Choose Your Own Adventure story. This is anything.”

Abstract contemporary art wasn’t always Lobdell’s medium of choice. He originally studied portraiture and photo-realistic representation. “I was against this,” Lobdell says, referring to his current artistic style. “I was a stark realist. I didn’t mess around. I thought abstract art was a joke when I was a conceited 18 year old who thought he knew how to draw perfectly.” Gradually, that changed with time and experience, but one thing that Lobdell has always felt passionate about is being a painter (he’s been at it since the age of three, he says). Maybe that passion came from his father, a professional photographer and Air Force veteran who, during the summers, had a stand at Saratoga Race Course with a painting of jockeys with their faces cut out. Patrons would pay to stick their heads in the holes and have their photos taken. “It definitely wasn’t his primary job,” Lobdell explains. “It was just a summer joke for a few years.”

After high school, Zack got accepted into the prestigious School of the Museum of Fine Arts in Boston. Though he learned a lot in his time there, after a couple of semesters, he found himself more interested in just painting, rather than studying and dissecting art in an academic environment. “The Museum School is great, but I’ve always been of the mind that if I was going to succeed with my art, it was because I was going to make art every day, really dedicate myself to it,” Lobdell says. “It wasn’t really about whether or not I had a degree in painting.” So in his mid-20s, Lobdell rented his very first studio out of the historic Shirt Factory in Glens Falls—a long defunct industrial space that’s been converted into a mall for artists studios, shops and galleries—and put his nose to the grind to produce some quality art that he could make a living off of. That was more than a decade ago.

How has Lobdell done since then? Since opening that tiny studio in the Shirt Factory, Lobdell’s work has been exhibited across the country, from the 2013 Miami Beach Art Fair to the Lucid Gallery in Denver to a solo show at Artlery 160 in Boston just last year. In December 2017, Lobdell teamed up with machinist/woodworker/designer Peter Harrison, who specializes in handmade, sculpture-like furniture pieces, to open the aforementioned Harrison Lobdell Gallery located in the historic, Victorian Harvey Mansion in Franklin Square.

This summer is promising to be one of Lobdell’s busiest—and potentially, most successful—given the pedestal his hometown is offering him. Lobdell’s work will be exhibited in the upcoming REVEAL International Contemporary Art Fair at the Saratoga City Center August 3-5. The REVEAL Art Fair is the dream of another Saratoga local, Jacquie Grande, who felt there was a lack of representation for contemporary art and artists in the city and decided to do something about it. The REVEAL Art Fair will feature works from 30 select galleries, showcasing the best contemporary art from both emerging and well-established artists from around the world. Lobdell also advised Grande on the local art scene and helped provide clarity for the concept, he tells me. If it’s a success, Lobdell believes the REVEAL Art Fair could elevate the arts community in Saratoga to a whole new level, maybe even bringing some international satellite galleries to Broadway.

The REVEAL Art Fair is just one of the places you’ll be able to find Lobdell’s work this summer. In May, Lobdell got confirmation that 11 of his pieces would be going up at the illustrious DzineNY in the Decoration & Design Building at 979 3rd Avenue in Manhattan. A 18-story mall with showrooms on every floor, the D&D Building (as it’s known) is home to a number of iconic New York luxury brands, such as Armani/Casa and Ralph Lauren.

After Lobdell’s streak of successes—along with the launch of the REVEAL Art Fair in August—one can’t help but wonder if Saratoga will someday be known not only for its historic racetrack, but also its burgeoning contemporary art scene. Keep your eye on Zack Lobdell, Saratoga; you’ll be able to say you knew him before he was famous. (For more of Lobdell’s artwork, follow him on Instagram @zacklobdellstudio.)

The Calendar: What's Going On In Saratoga Springs Over Jazz Fest Weekend

Exclusive: Actor Ryan Raftery Talks About His Hilarious New Musical, 'The Rise And Fall (And Rise) Of Martha Stewart'