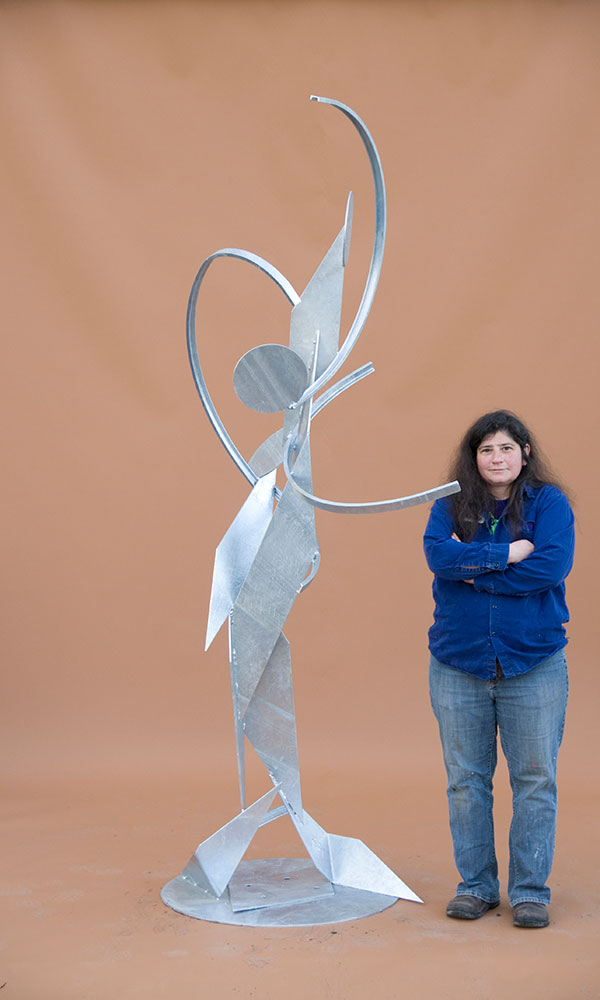 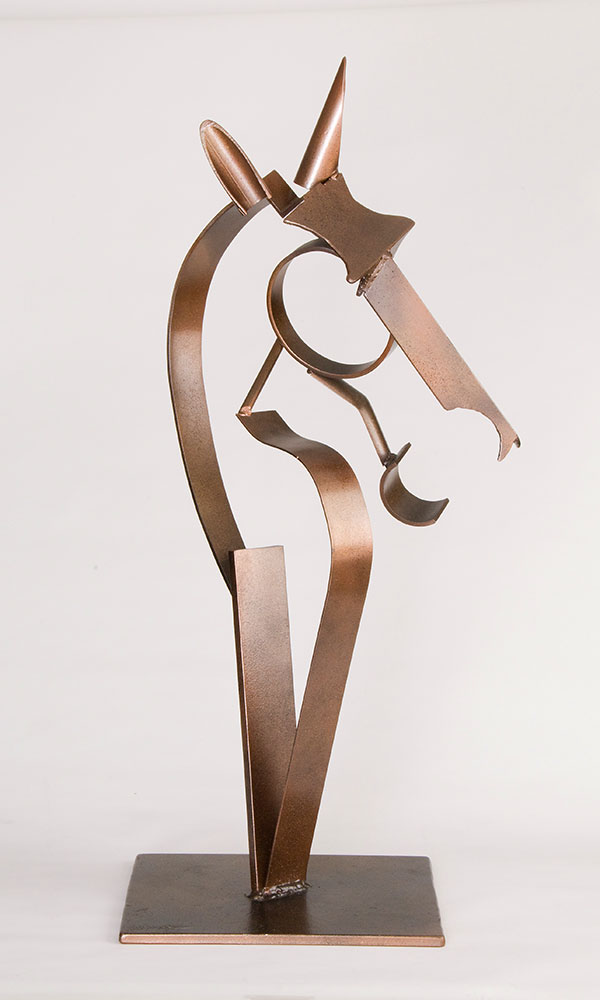 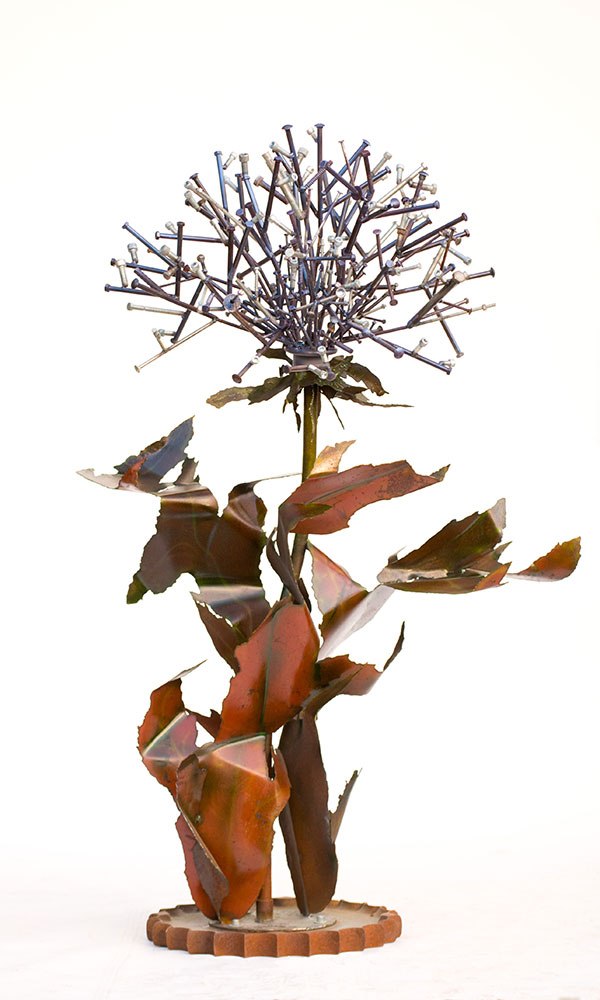 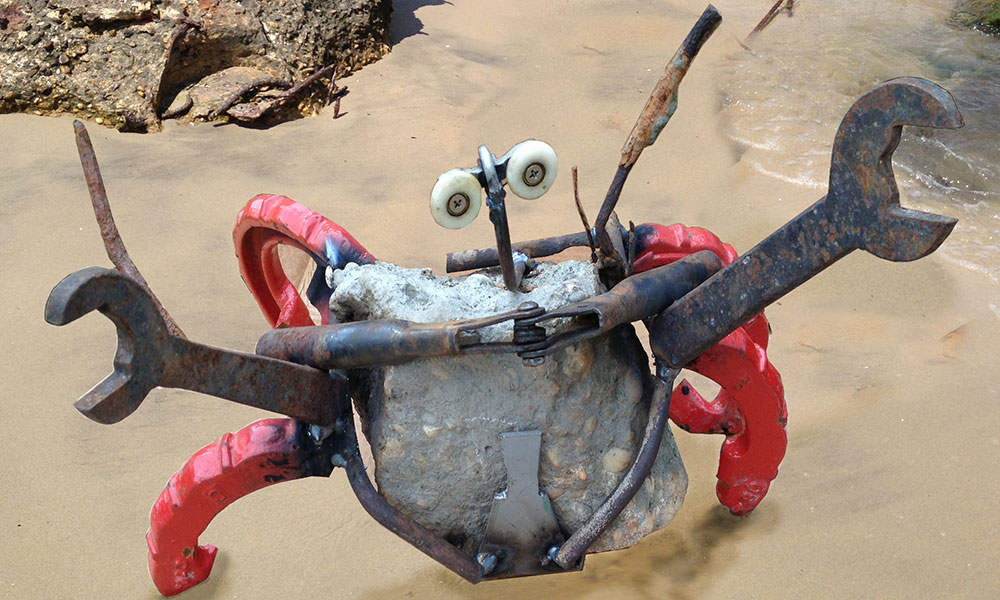 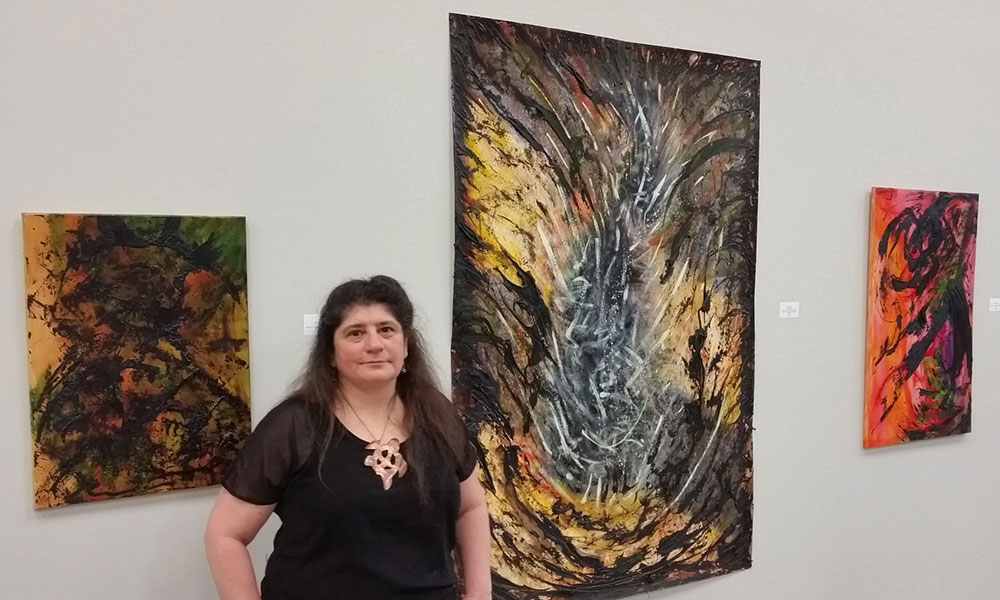 'Caval,' one of Vara's many horse sculptures. (miChelle Vara)

miChelle Vara stands next to three of her paintings made with a mixture of tar and oil paint. (miChelle Vara)

I used to teach music lessons (guitar and ukulele) on Saturdays in Schuylerville. On the drive there, I’d always pass this little white warehouse at the corner of Ballard Road and Route 50, maybe just a mile up the road from the Wilton Mall. The warehouse itself wasn’t anything extraordinary, but its yard always grabbed my attention. It was filled with imaginative sculptures made from found and repurposed metal objects, welded and twisted into alluring, abstract shapes, such as strange creatures or majestic horses (an obvious hat-tip to the area). It turns out that this otherworldly place is called Ballard Road Art Studio and is owned by artist miChelle M. Vara. Thankfully, she let me in.

An artist of many talents—welder, photographer, jewelry-maker, restorer—Vara has a theory as to why she’s drawn to found objects and, well, for lack of a better word, junk. “Objects carry energy and memory,” says Vara. “These objects have been used—they’ve been handled. I don’t know where they came from or what their past was. But as soon as I meet the objects, I know what it wants to be.” This passion for collecting and, in a sense, recycling found objects is what drew Vara to welding when she was only in her teens. Completely self-taught, she tried her hand at industrial and commercial welding gigs in order to financially support herself as an artist. This included everything from underwater welding to iron-working in a factory and breaking down old paper mills in Alabama. “I absolutely adore objects that are found or recycled,” says Vara, who tells me that she enjoys giving the objects “a new function” or getting observers talking about it in a new light. Found objects literally surround Vara in her workshop: She has a collection of broken tools, metal chains, bent bicycle gears, old car parts and rusted wires—as well as her own evocative, welded sculptures that rise from the scrap pile.

Vara was born in New Jersey and educated at a nontraditional Montessori school where her artistic inclinations were piqued by a photography class. It wasn’t long after this that she got her first paid job—at the age of nine, no less—hand-lettering signs on the Jersey Shore. After receiving a full scholarship and graduating from the prestigious Pratt Institute in Boston, Vara spent some time traveling and working odd jobs up and down the East Coast (including a stint in the circus). Then, in 1995, Vara chose to settle down in Wilton and open up the Ballard Road Art Studio. She handpicked the Saratoga area because of its proximity to one of her idols, the American abstract sculptor and painter David Smith. Arguably the most important metal artist and sculptor of the 20th century, Smith permanently relocated his successful studio in 1940 from the bustle of New York City to tiny Bolton Landing on Lake George. “The really interesting thing about this area is that we’re in between New York City and where David Smith spent his time,” Vara says. “So, for me, it’s almost like a mythological path from the City to David Smith’s space, and I think you find more metal sculptors in Upstate than you do anywhere.” To Vara’s point, C & C Specialty Iron, founded in 1994 and run by another welder and machinist, Chad Wilson, joined forces with her studio in 2000 to expand its operations and offer more custom welding projects to clients.

Unlike many artists, who produce works of their own mind and then sell their wares to interested buyers, Vara prefers to work almost exclusively with clients on commission-based pieces. “I know a lot of artists don’t, and don’t feel comfortable with it,” says Vara of commission-based projects. “However, there’s a synergy when you work with a client, and you’re trying to connect to a higher level of what they expect,” she says. And that template has worked out well for her; she’s not only been able to build out an expansive list of clients, but it’s also allowed her artwork and sculptures to reach a much wider audience. Her work has been exhibited in galleries and installed in public spaces and parks all around the world. She’s done everything from creating backdrops and scenery for Universal Studios and Disney to paying tribute to the World Trade Center in Albany. She’s even produced a traveling sculpture, entitled Embryo, that’s been exhibited at England’s Stonehenge (!), and has made stops in Germany and Plymouth (UK).

When Vara isn’t doing commissions for clients, you can find her producing a number of personal projects—one of which nods to that Montessori school education. She currently has a photographic series on display in Germany, part of a traveling exhibition called Hope is Maybe, which features a number artists whose work highlights or draws attention to the ongoing refugee crisis in Europe. “I like to do things that are activist-based,” she says. And she was recently invited to produce a piece for the Sculpture by the Sea series, which installs artists’ works of art at Bondi Beach in Sydney, Australia. It’ll be on display from October 18 to November 4, and again next year, from March 1-18.

Exhibiting her work internationally is a tremendous honor—and it’s brought her around the world—but lately, Vara’s found it more difficult to leave her studio in Wilton for weeks on end. Not just because it’s her business, but because she loves it here so much. “This is a super area to live,” Vara says. “You can do anything: hike, swim, boat. And it’s all within five or ten minutes. Not too many places really have that.” Not to mention something as unique as the Ballard Road Art Studio or miChelle Vara. (Click on the photo at the top for a photo gallery of more of Vara’s work.)

Daily Racing Form: Dirty Gets Another Shot At World Of Trouble In Allied Forces