Assorted cheeses, meats and more, artfully arranged on a board so that they look almost—almost—too gouda to dig into? We’re talking charcuterie boards, the grazing craze that’s taken over Instagram feeds everywhere. Does Saratoga love charcuterie as much as the rest of the foodie world? You’d feta believe it.

Build Your Own Board, Upstate New York–style

Start with your base: A wooden cheese board from Saratoga Hardwood or a glass platter, such as a flattened Saratoga Water bottle from Impressions of Saratoga, will do. Slate boards also provide a nice contrast to the cheese.

Anchor your board with the cheese: Choose your favorite cheeses but try to use a variety of textures—soft, semi-soft and hard. Also think about including cheese from cows (Argyle Cheese Farmer), goats (Nettle Meadow Farm and Artisan Cheese) and sheep (Dancing Ewe Farm).

Consider the pairings: If the cheeses are the stars of your board, skip the flavored crackers and use neutral ones. Place some Saratoga Crackers next to the hard cheeses and a baguette from Mrs. London’s next to the soft or creamy cheeses.

Fill in the holes: Add locally produced condiments such as mustard, honey, jam and hummus, plus fresh fruit, veggies and cured meats.

Dress it up: Garnish your board with fresh herbs, flowers or other signs of spring. Don’t forget to add a few utensils or toothpicks. 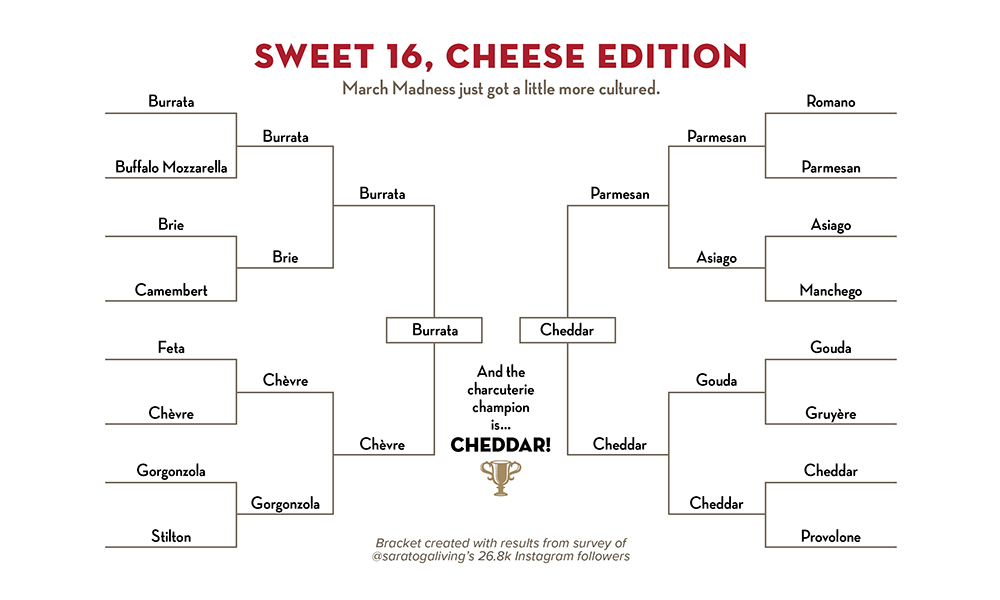 Two Upstate New Yorkers dare to go where no charcuter-ist has gone before.

This September, Capital Region residents Preston Moore (Albany) and Mike Cassella (Saratoga) will attempt the greatest feat of cheese board engineering the world has ever seen: A Guinness World Record for the longest charcuterie board. The pair are the co-founders of the Herkimer-centric Facebook group 315 Foodies (Moore and Cassella both grew up in Herkimer, and 315 is the village’s area code), so naturally, their record-attempting board will be 315 feet long, more than double the length of the current Guinness record holder. Here’s how Moore and Cassella plan to pull off this muenster undertaking: