Starting in the “Saratoga After Dark” Issue (July 2018), saratoga living is pleased to introduce its exciting new special promotional section: “The saratoga living Food + Drink Guide 2018,” which showcases the top restaurants and bars in the Saratoga area. Interested in being included in this section? Contact [email protected]

OSTERIA DANNY
Run by Executive Chef Danny Petrosino and his wife, Patti, Osteria Danny specializes in Italian-American cuisine with an emphasis on simplicity and creative development. As such, the menu is updated frequently to encompass new culinary concepts and locally sourced ingredients when they’re available. Although the menu is continuously evolving with the creative will of Chef Danny, original recipes remain a pivotal influence in the dishes that Osteria Danny produces. For example, there’s a simple dish called “Shrimp the way my father liked” on the menu, which is accompanied by lemon risotto, butter garlic and “a bunch of other stuff,” and all pastas and desserts (mmm…coconut cream pie and pistachio cheesecake) are made by Danny himself. Osteria Danny also offers a variety of wines to complete a truly Italian meal, including Zenato Amarone and J. Christopher Pinot Noir. Open seven days a week, the restaurant’s located at 26 Henry Street, within walking distance of Broadway, and has ample off-street parking.
26 Henry St, Saratoga Springs • 518.423.7022 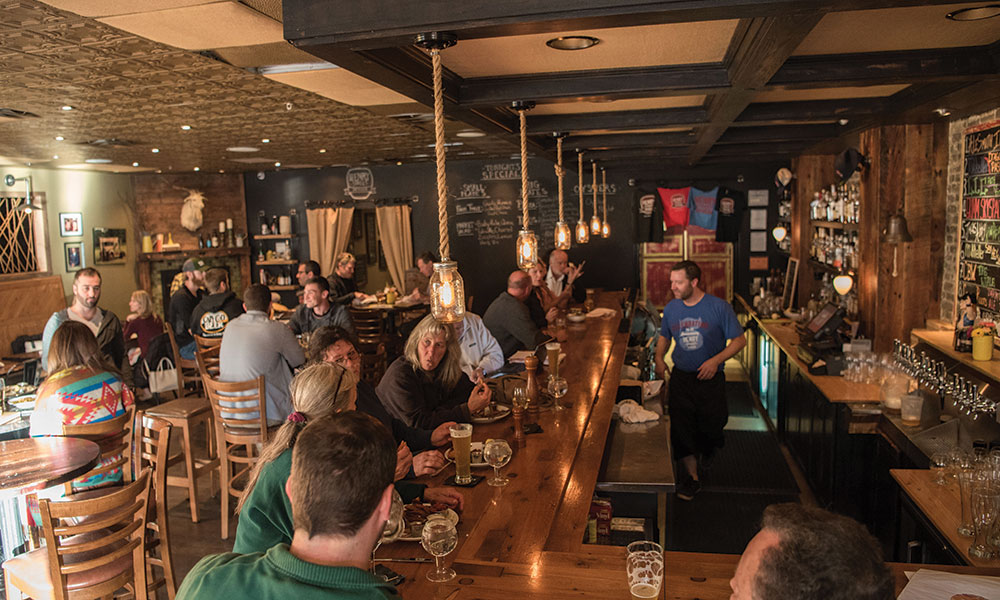 HENRY STREET TAPROOM
With its extensive selection of beers, whiskeys and cocktails, Henry Street Taproom in Downtown Saratoga Springs is a choice location for craft beer connoisseurs looking to try something different. This relaxed restaurant and bar not only has some of the best (most fun) servers, bartenders and hosts in the city, but also one of the best draft lists, as well as a wide selection of imported wines (including Sydney Ann Pinot Grigio, a white wine from Italy, and Pie de Palo Malbec, a red wine from Argentina). In addition to its more traditional bar fare, the Taproom offers several charcuterie plates and imported cheeses, including Tomme Brulee, a soft French cheese made from sheep’s milk, and Roomano (not to be confused with Romano), a hard Dutch cheese made from cow’s milk. The Taproom’s cheeses are served with three special sides: house-baked sourdough bread, fresh fruit and house-made chutney.
86 Henry St, Saratoga Springs • 518.886.8938 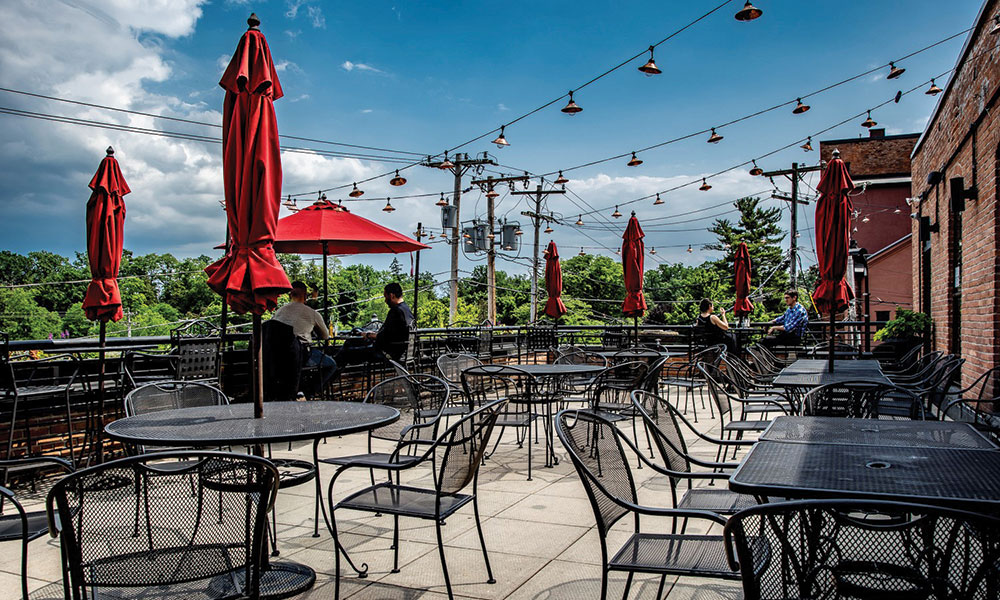 HARVEY’S RESTAURANT & BAR
Located at 14 Phila Street, right off Broadway, Harvey’s is, for locals, a go-to restaurant and bar to watch a game, enjoy some drinks with friends or grab a bite to eat. It’s named after the good-natured Irish ghost, Harvey, who brings good fortune (or “pooka,” as the Irish call it) to all who visit. (That, and beyond good steak tacos.) It’s open until midnight seven days a week, with live entertainment every Saturday night, and is able to accommodate weddings, cocktail parties, showers and other private events. The scenic rooftop patio is an added bonus: Customers can enjoy the beautiful view of the Saratoga skyline while sipping a Guinness and munching on corned beef and cabbage. Or, if you’re not particularly fond of Irish cuisine, Harvey’s has other mouthwatering dishes to pair with the drafts and cocktails on its eclectic menu. At Harvey’s no choice is a bad choice!
14 Phila St, Saratoga Springs • 518.583.0003 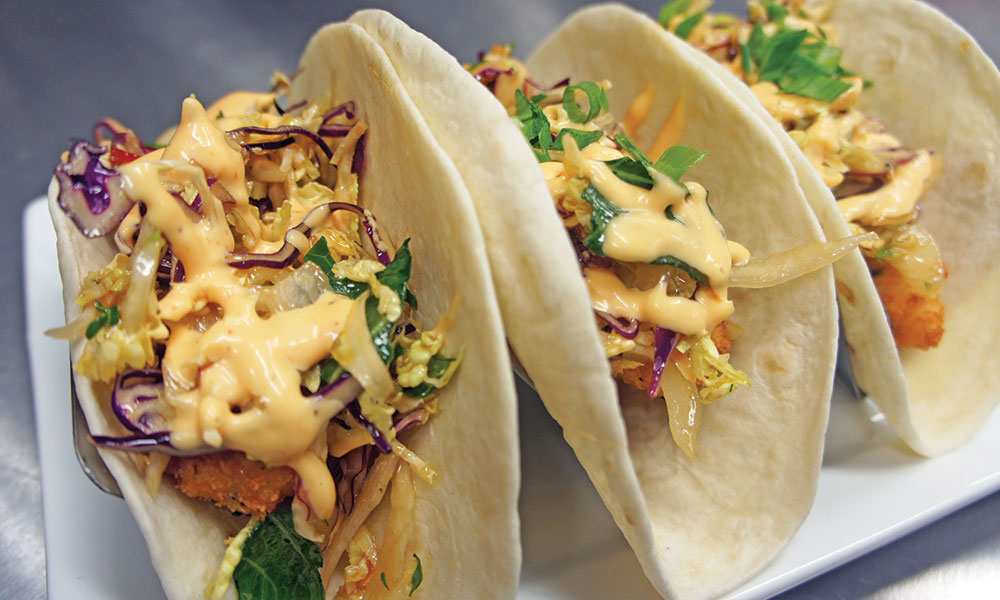 DUNNING STREET STATION
Located about ten minutes from Downtown Saratoga Springs on Rt. 9 in Malta, Dunning Street Station, with its various soups, entrées, desserts and drinks (including 16 beers on tap), is a prime location for a hearty meal, slightly outside the bustle of the Spa City’s nexus. Bob McKenna and Chef Scott Ringwood purchased the restaurant in 2015, and despite its laid-back environment, take pride in maintaining high-quality dining and customer service standards, having won multiple awards for the restaurant, including Best Newcomer at the 2017 Saratoga Chowderfest. Can’t-miss dishes include the lobster mac, salmon (served with jasmine rice) and generous variety of steaks, burgers and wings.
2853 State Rt 9, Malta • 518.587.2000 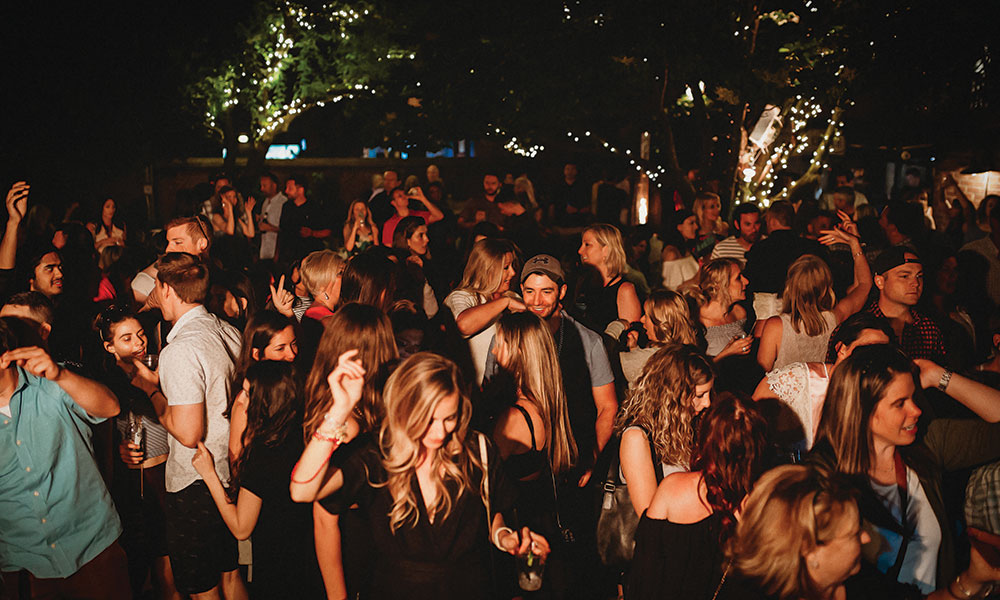 GAFFNEY’S
A longtime Saratoga Springs staple, Gaffney’s is a local favorite for casual American dining and bar fare. Its Caroline Street location in the heart of Downtown Saratoga solidifies its status as a go-to spot for late-night dining, drinking and dancing. Patrons can enjoy regular DJ and live music performances, as well as half-priced beers on Tuesdays beginning at 4pm. In addition to the burgers, wings, nachos and specials available on its dinner and late-night menus, Gaffney’s offers its Belvedere Brunch from 9am–3pm on weekends, featuring eggs, sandwiches, pancakes, waffles and other griddle confections.
16 Caroline St, Saratoga Springs • 518.587.7359 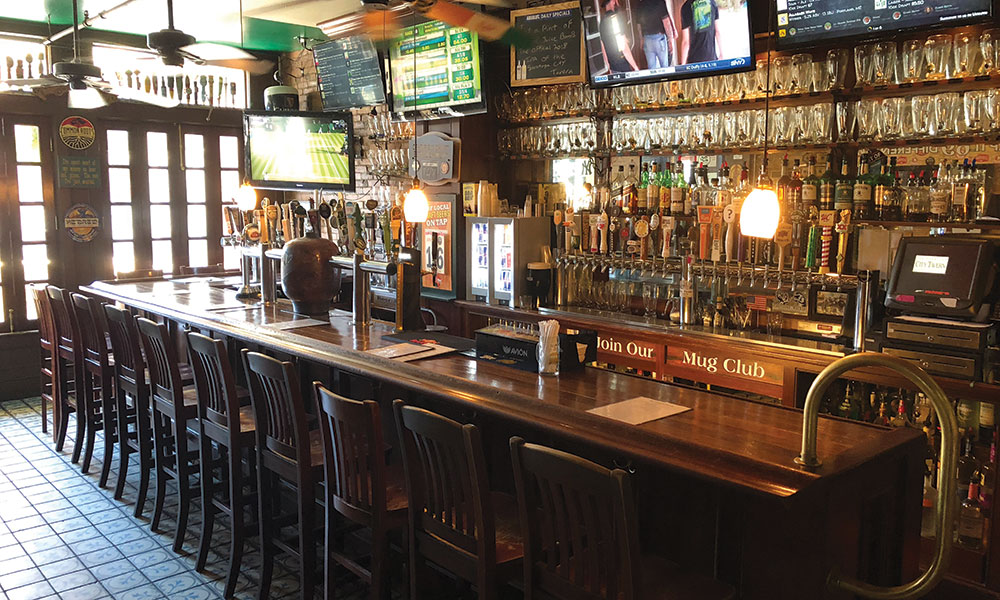 SARATOGA CITY TAVERN
Located on Caroline Street in the heart of Downtown Saratoga Springs, “The Tavern,” as it’s affectionately known to local bar-goers, has an extensive menu of classic pub fare and more than 100 beers on tap. Owners Pat, Adam and Jason Fitch are is well acquainted with time-honored tavern meals but not afraid to explore creative ways of enriching an already well-loved cuisine, such as the Beer Cheese-Burger (a burger topped with beer cheese, onions, bacon and jalapeños). In addition, the Saratoga City Tavern boasts five floors of restaurant space, including its rooftop, a signature Saratoga nightlife hotspot, as well as beautiful views of the city and live music every Friday, Saturday and Sunday. It’s also open seven days a week (weather permitting).—Madeline Conroy
19-21 Caroline St, Saratoga Springs • 518.581.3230 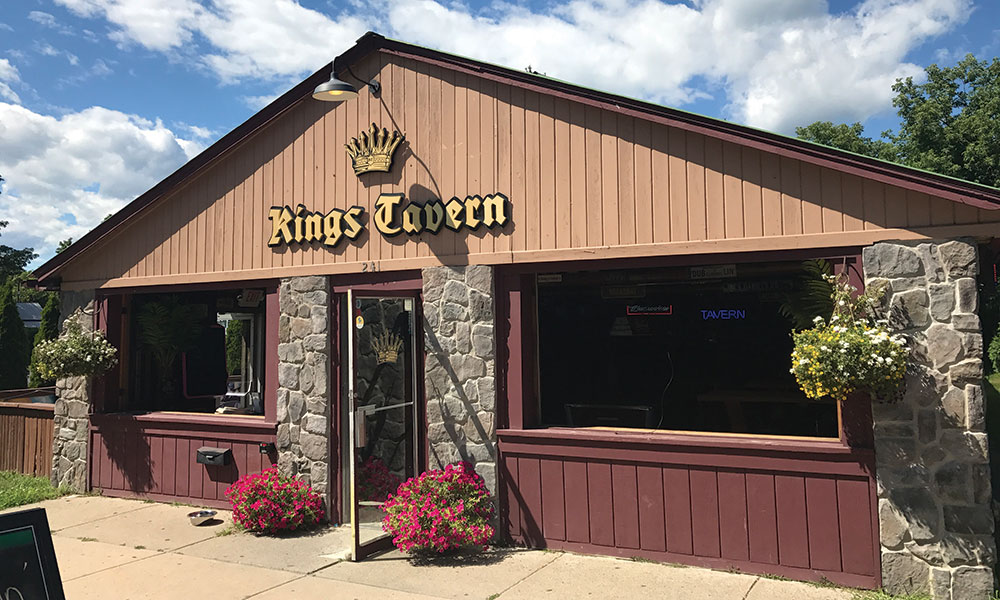 KINGS TAVERN
Situated directly across from Saratoga Race Course—and less than a minute’s walk from the main gate—Kings Tavern has a welcoming environment where its staff “treats tourists like locals and locals like royalty.” Kings Tavern serves a full menu of tavern fare all day, seven days a week, including breakfast starting at 10am on weekdays and 9am on weekends. It also offers an extensive selection of Bloody Marys, as well as six-packs of beer in coolers, whimsically shaped like arrow quivers, and bags of ice, both of which can be brought to the track. As an added bonus, if you drive by and honk your horn, everyone inside the restaurant drinks, a policy appropriately dubbed, “You honk, we drink.” —Madeline Conroy
241 Union Ave, Saratoga Springs • 518.581.7090

PRIME AT SARATOGA NATIONAL
Located on Union Avenue near Lake Lonely and Saratoga Lake’s north shore, and headed by Angelo Mazzone, Prime at Saratoga National is one of Saratoga’s top upscale dining venues. The restaurant, open for lunch and dinner seven days a week, as well as for jazz brunch on Sundays (think omelettes, pastas and carving stations), offers indoor and al fresco dining, overlooking the 18th hole of the beautiful Saratoga National golf course. Besides regular daily seatings, Prime is also the perfect setting for weddings, anniversary parties, corporate events and galas, such as UPH’s annual Shaken & Stirred Celebrity Bartender Party, which took place there this past May.
458 Union Ave, Saratoga Springs • 518.583.4653 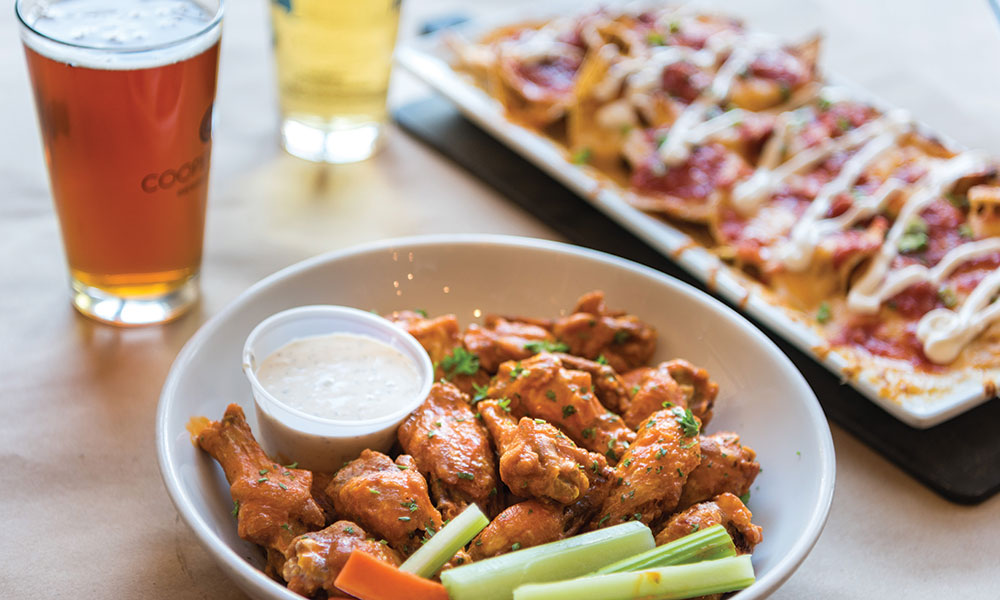 SARATOGA STADIUM
From its Broadway locale, Saratoga Stadium is arguably the city’s finest sports bar, providing televised coverage of a range of top sporting events. Saratoga Stadium offers patrons a casual atmosphere, with a menu full of all the traditional favorites—burgers, hot dogs, nachos and wings—as well as an all-you-can-eat fried shrimp special available on Friday evenings from 6-9pm. Saratoga Stadium also offers a diverse range of seasonal drinks (such as spiced apple punch), wines by the glass and by the bottle and house-made sangria. To finish things off, the dessert menu displays some tempting treats: fried dough and the “Junior’s Giant Cheesecake for 2.”
389 Broadway, Saratoga Springs    518.226.4437 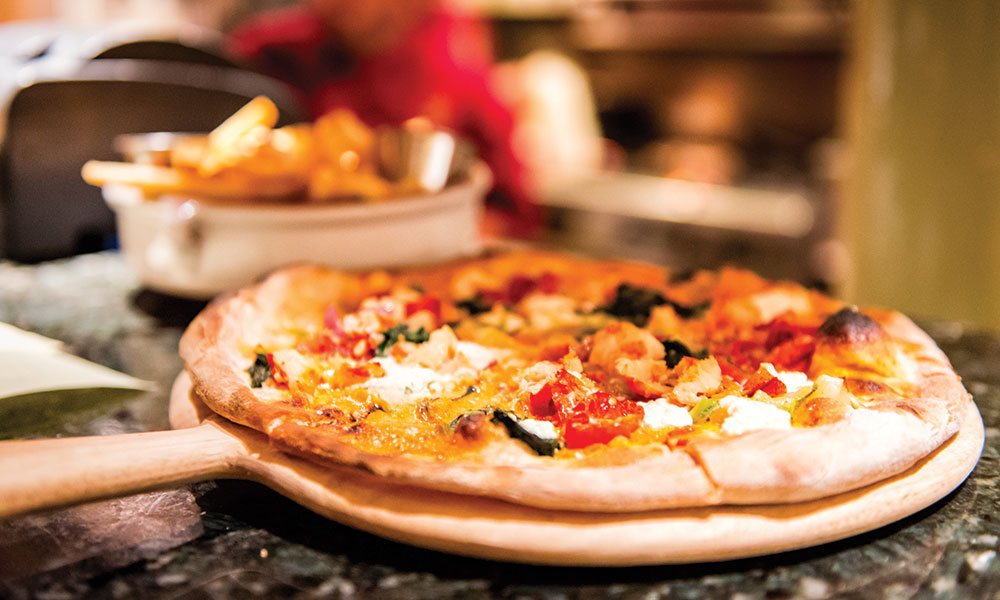 MAX LONDON’S
In its cozy yet sophisticated nook on Broadway, Max London’s sits beside its sister shop, Mrs. London’s Bakery, a local favorite known for its delicious pastries and baked goods. Max London’s uses locally sourced ingredients, including fresh-squeezed fruit juices in its cocktails and house-made mozzarella cheese, making it an appealing choice for those looking to support local farmers. The menu contains several enticing items among its many culinary offerings, such as the “Devils on Horseback” appetizer (medjool dates stuffed with blue cheese and marcona almonds, accompanied by applewood smoked bacon and smoky maple syrup), and there’s a separate (delicious) menu for weekend brunch.
466 Broadway, Saratoga Springs • 518.587.0505 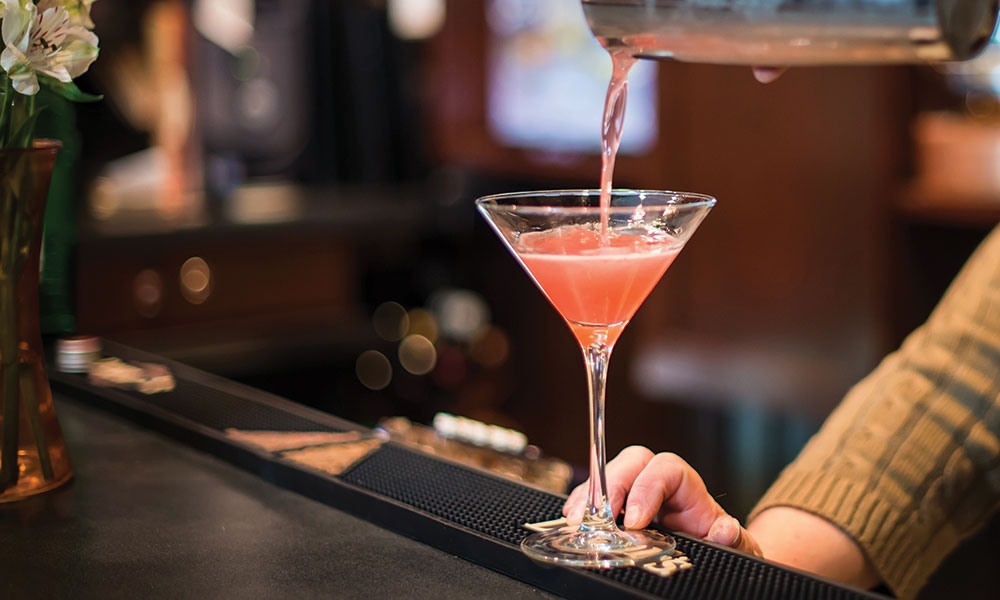 LAKE RIDGE RESTAURANT
Conveniently located about 15 minutes south of Downtown Saratoga in Round Lake, Bob McKenna and Chef Scott Ringwood’s Lake Ridge Restaurant has been a local favorite for casual fine dining for 17 years. Lake Ridge specializes in award-winning New American cuisine, which it shows off on upscale lunch and dinner menus, highlighted by Herb Crusted Swordfish, Duck Breast, Filet Mignon and its Pecan Pork Chop. McKenna says Lake Ridge Restaurant, which operates under the slogan “simply the best and voted the best,” is proud of its “consistent greatness,” as it has been winning awards for over a decade, including Best Chef in the Saratoga Today Best of 2018 awards.
strong>35 Burlington Ave, Round Lake • 518.899.6000 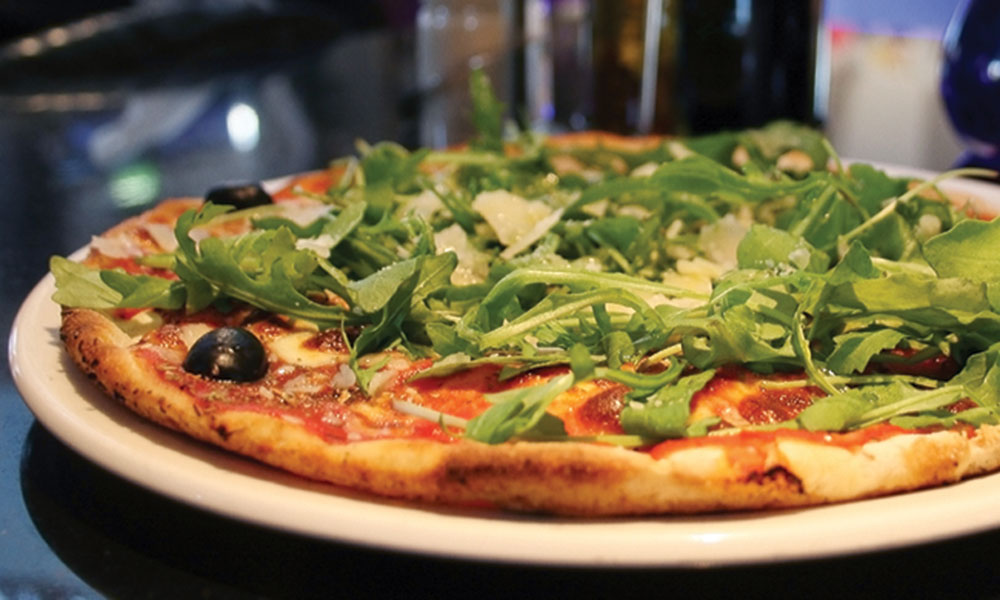 MAMA MIA’S PIZZA & CAFE
Just outside Downtown Saratoga, Mama Mia’s Pizza & Cafe, a family-run Italian restaurant, is situated in the Ballston Avenue Price Chopper Plaza. Mama Mia’s takes pride in the diverse range of Italian comfort foods that it serves, such as calzones, Italian meatballs, hero sandwiches, pasta dishes and hand-tossed wood-fired pizzas, as well as chicken, veal, salmon and vegetarian and gluten-free entrée options. While the restaurant has a relaxed, cozy vibe for dining in, Mama Mia’s also provides full-service catering, from food and tent set-up, to large trays of delicious food, for any event. Take-out is also a popular option for many of Mama Mia’s loyal customers.
185 Ballston Ave, Saratoga Springs • 518.583.7783 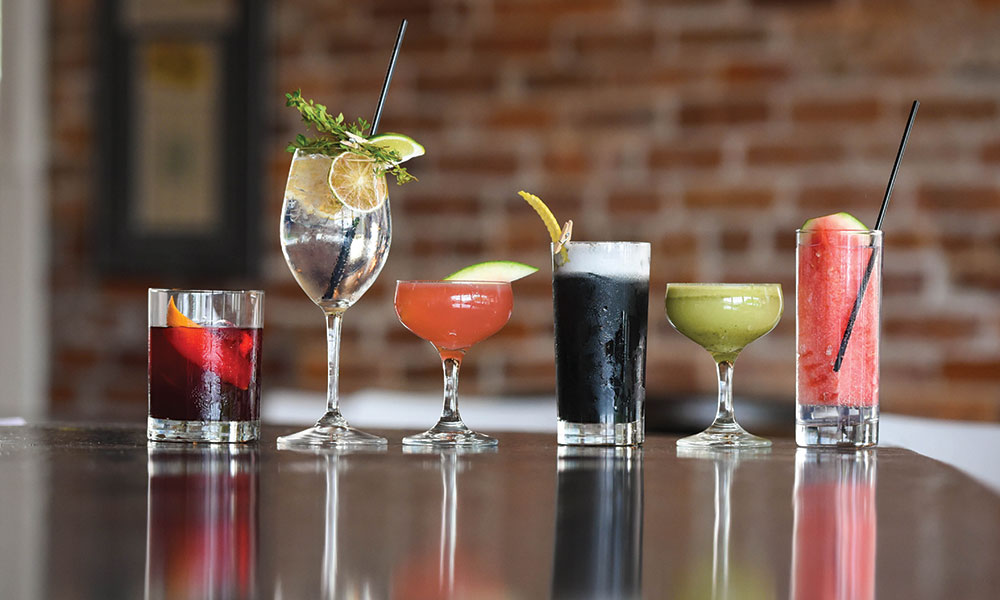 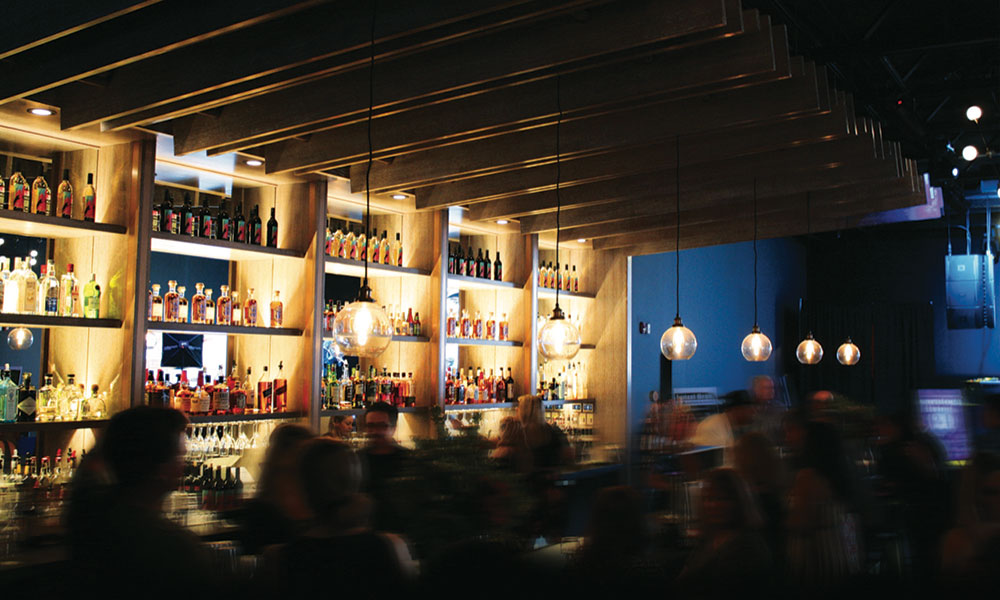 PUTNAM PLACE
Known for its live music performances and full, gorgeous bar, the recently renovated Putnam Place is a popular choice for Saratogians looking to enjoy late-night entertainment. The drink menu offers wines (including Arias Wine by David Ortiz), hand-crafted cocktails (made using berries and herbs grown in Putnam’s own garden on its brand-new patio) and a rotating selection of craft beers (available at the indoor bar and outdoor beer garden). Putnam Place will be hosting frequent music events this summer, including rap sensation Styles P on July 14. Putnam Place can be easily accessed directly from Broadway, using a walkway between Cantina Restaurant and N. Fox Jewelers, or from Putnam Street.
518.886.9585

SINCLAIR SARATOGA
A hip bar area, twenty-four taps of craft beer, a VIP nightclub, an old-school game room/arcade and dancing under the stars all make Sinclair Saratoga one of the city’s hottest late-night venues. Opened in 2017, the bar/club/arcade is a spot that attracts a younger Saratoga crowd, and its variety of offerings keep people there all night. On any given Thursday, Friday or Saturday evening, the bar and adjoining patio area are bumping, with a DJ or live music, corn hole range and outdoor seating (all seasonal, of course). A neon sign, casting a pink glow over the bar, tells you everything you need to know about the Sinclair experience: “Together is a beautiful place to be.”
518.934.3535

Sarah Midani is a senior at Siena College, completing her BA in English. She's worked as an Editorial Assistant at saratoga living and is now a Contributing Writer.

Brothers José And Irad Ortiz Are Horse Racing Phenoms. Isn't It Time Everybody Knew That?