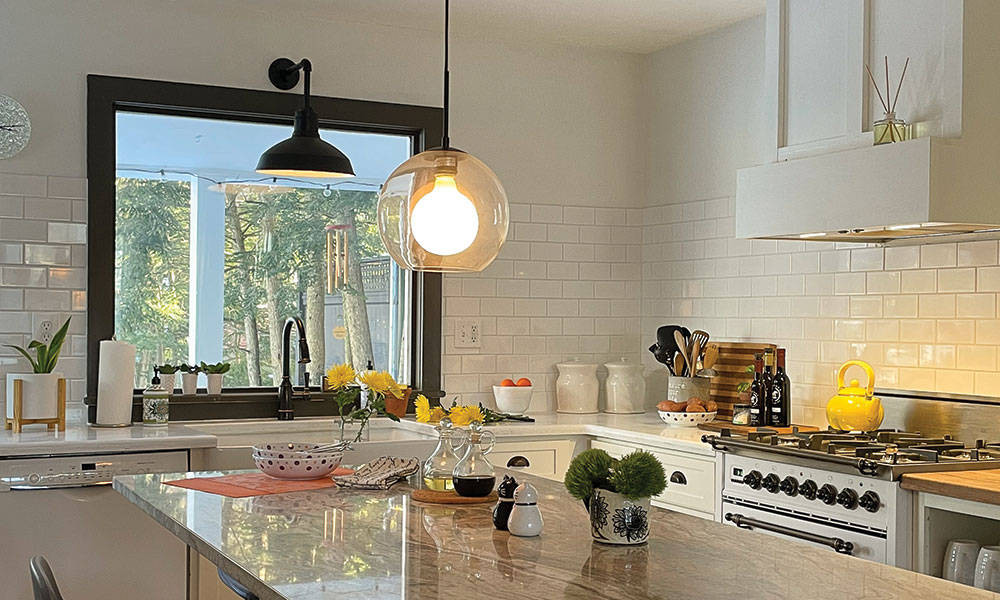 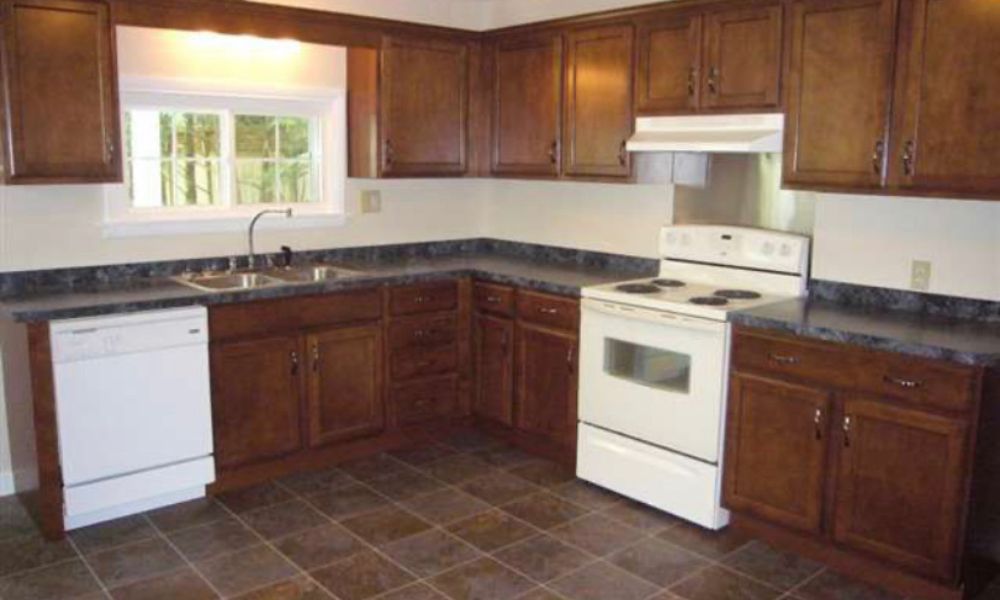 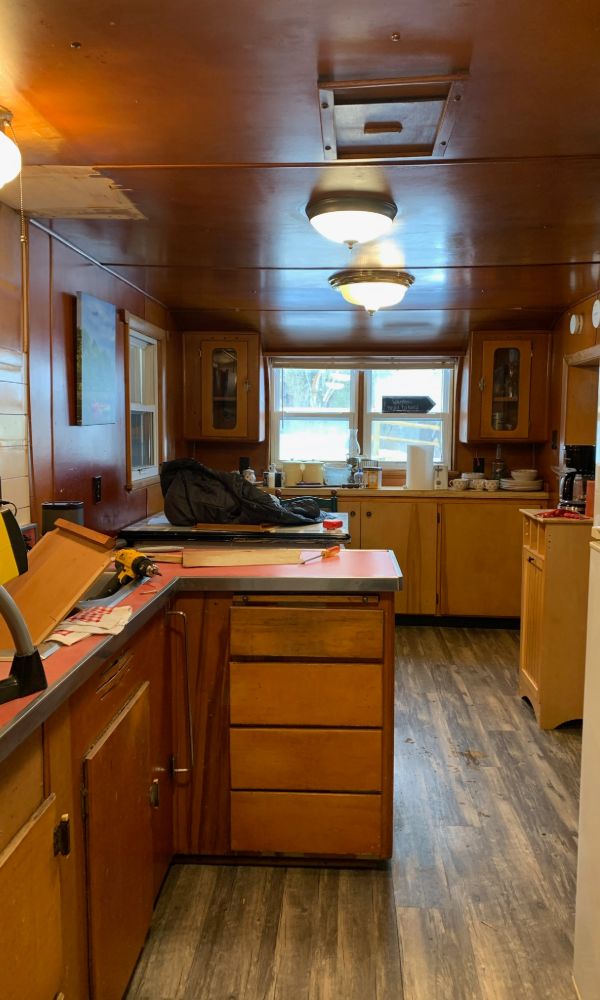 In May of 2019, Bethany Parks needed a change of pace. She was divorced and living in a home in Greenwich that she had renovated herself. “I was like, ‘Alright, I just can’t be in Greenwich anymore,’” the Ulster County native says. “’It’s too small of a town.” So she set her sights on bustling Saratoga Springs, researching brand-new apartments equipped with all the bells and whistles. The rental property she fell in love with, though, was a small, cozy home on Franklin Street that was built in 1832, making it the third-oldest house in the city. The rent was a little more than she was planning to spend, but she was smitten. “I was just like, ‘This is it—I’m going to pay extra and give myself a vacation for a year,’” Parks says. “Almost like going to Paris…but not.”

While she loved the home she was about to move into, it was definitely dated. “I said to the landlord, ‘What are you doing with blue carpet?’” she says. (Surprisingly, he took out the carpet and put in wood floors before she moved in.) “And then I came into the kitchen—the dark, tight kitchen—and I said, ‘Can I paint the cabinets white?’ I’m sure he was like ‘Who does she think she is? This is a rental—it’s not her house.’ And I’m like, ‘This is my vacation home in Paris—I want to make it really pretty.’” Ultimately, the landlord said no to Parks’ art project, but she moved in anyway. She lived with the dark, tight kitchen for the better part of a year, imagining what it could be but still enjoying the home’s convenient location and its front porch, which she calls her window to the world.

Years prior, in another part of New York, architectural photographer Mark Samu and his wife, decorative painter Lucianna, were living on Long Island, their professional paths crossing occasionally as they both worked for clients with luxury homes in the Hamptons. Come 2001, the couple had had enough of Long Island life and closed on a home in Saratoga Springs the day the Twin Towers fell. A few years after moving upstate, they bought a 3,000-square-foot home that was built in the 1780s and located on five acres on the Hudson River in Gansevoort, and completely gutted and renovated it. “Lu was the designer and I was the tweaker,” Samu says. “Because that’s what I did—I knew how to tweak something to make it look better.”

After that reno project, the former Long Islanders kept at it, purchasing and renovating old homes around the Saratoga area. When Lu passed away in June 2019, the couple had renovated a total of 11 homes together, two of them complete flips.

In March of 2020, Parks met Samu—who by that point had moved from Gansevoort into a tiny 300-square-foot home on Lincoln Avenue—for the first time at Uncommon Grounds. Shortly after sitting down, a barista told them the shop would be closing soon, even though it wasn’t close to closing time. They picked up and went to Max London’s, which was also closed. They ended up grabbing burgers at BurgerFi, which was still open, but by that night they already suspected the world was about to change.

“When COVID hit, I was grounded from my work travel and pondering if I would renew my lease,” Parks says. (She’s the director of sales for Source International, a Boston-based company that makes chairs for homes and offices.) “I was going to need a creative project to work on, something to fill my time. On a whim, I asked my landlord if he would be interested in selling the Franklin Street property and—voila—he said yes. I didn’t close until September 2020, but a week after that I was tearing out walls with my Sawzall and reinventing my kitchen.”

While Parks is certainly a hands-on sort of house-flipper—“I like tearing stuff apart,” she says—as her relationship with Samu grew closer, she did utilize his contractor for some of the little house’s larger projects, like creating a closet off the kitchen for the washer and dryer, and removing the wall between the kitchen and dining room to create an open-concept entertaining space. Samu, with his eye for design, helped out as well; it was his idea to put a large framed window above the sink. “The paint color for the black frame is called Dragon’s Breath,” Parks says. “And then we painted the shed in the back [which you can see through the window] with Dragon’s Breath, too.”

Meanwhile, Samu was working on a few reno projects of his own, including one on Cossayuna Lake in Washington County. And this time, it was Parks who would help him out. “When I sold my Hudson River home, I said to my real estate agent, ‘I’ve got to find something else on the water,’” Samu says. “So she texts me that there’s something on Cossayuna Lake. I didn’t even know where that was.” He and Parks rode out to the property (it’s about 30 minutes from Saratoga), and when they got there, a devastated Samu didn’t even want to go inside. “It was a dump,” Parks says. Samu was about to call his agent to cancel, but there was no cell service. “We walked inside,” Samu says, “and Miss Optimistic Positive [Bethany] is like, ‘Oh my god, this is great!’ Then she walks into the kitchen and says ‘I think this was a trailer.’”

“And then it was game on,” Parks says.

Indeed, the tiny property on Cossayuna Lake, which Parks and Samu now refer to as “The Fancy Camp,” is a 1950s camper with a house literally built onto it. Upon tearing out an interior wall, the pair, by now all in on helping each other with various home projects, discovered it was actually an exterior wall of the RV, and what used to be an exterior window had been converted into a “takeout window” between the kitchen and living room. Now that the renovation is complete, the tiny 548-square-foot Fancy Camp is going for $300-$350 per night on Airbnb, thanks in large part to Samu’s photography expertise. “Honestly,” he says, “the photography sells this stuff.”

While Samu and Parks, who refer to themselves as “activity partners,” own each of their properties separately, they do make a good team when it comes to the renovations. He loves the negotiation to get the property, and then putting the finishing touches on a home; she loves everything in between. “Mark’s got this house that we’re working on now, and as soon as I walked in, I hammered this big hole in the ceiling,” Parks says. “I can’t wait to tear things down.” Samu adds: “And I already know where artwork is going when the house is finished, even if the stairs are just being torn out.”

As for the duo’s interior design preferences? “They’re pretty similar,” Samu says. “A little rustic—almost like side-of-the-road, garage sale stuff. The thing I learned from Lu was that no matter what you do, you need at least one good thing in a room, whether it’s a good paint color, a good fixture or a good piece of furniture. The rest of it can kind of be junk.” But when a high-end furniture salesperson and photographer with a keen eye for design work together on a project, even the “junk” looks pretty darn good.